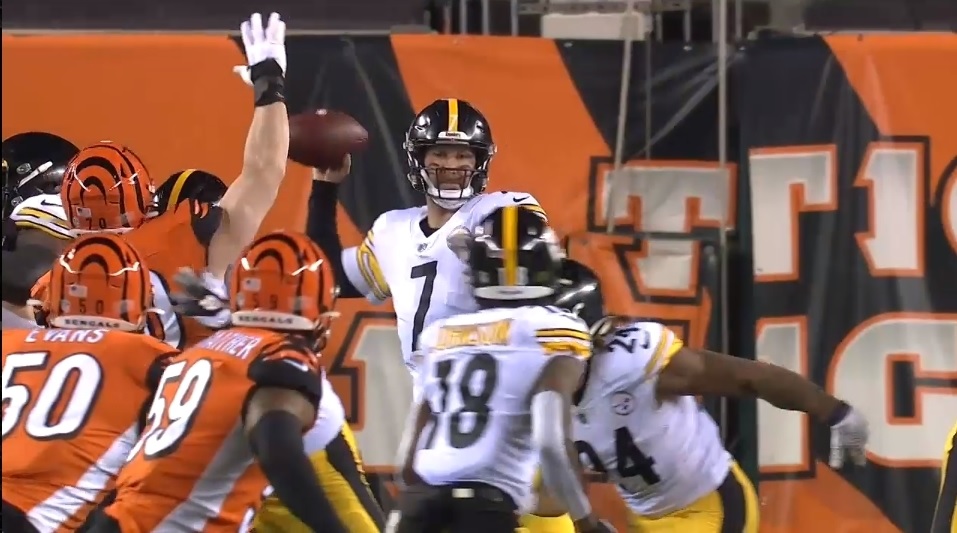 There’s no question the staple of the Pittsburgh Steelers’ passing game – really, their entire offense – has been the short pass game. One-step, three-step throws to immediately get the ball out and to their array of playmakers. Though that mentality has been criticized, especially during the team’s three-game losing streak, Ben Roethlisberger explained its many benefits in speaking to the media Wednesday.

“I think [the short pass game] was put in for multiple reasons,” he told reporters via the team’s YouTube channel. “I think when you’ve got playmakers on the outside, you want to get it in their hand quick.”

Diontae Johnson has been Roethlisberger’s favorite target of the season, thrown to 144 total times throughout 2020 (140 not counting the Week 17 game he didn’t play). He’s the ideal player to “throw short, run long” with, a shifty, elusive “X” receiver capable of winning in space. But he isn’t the only weapon. Chase Claypool is a freaky player able to do damage after the catch while JuJu Smith-Schuster is a Hines Ward-esque receiver capable of barreling his way in the middle of the field.

“Sometimes it’s a way to pick up the pace of an offense, right? When you’re not sending the ball 50, 60 yards down field, guys can get back to the line of scrimmage faster.”

It’s a way to run tempo and keep players fresh. Send everyone deep downfield and receivers can get worn out. Pittsburgh’s had some of its best success when playing with tempo and spreading the field. It’s how they came back to beat the Baltimore Ravens in the first matchup, running a ton of 01 personnel in the second half of the game to mount a comeback.

Another obvious benefit is keeping Roethlisberger upright. He was sacked 13 times in 15 games this season, historically low numbers, and the quick-pass game is one reason for that.

“Obviously the line doesn’t have to protect quite as long. You can avoid blitzes when the ball’s coming out. So, there’s a lot of different things that you can attribute to why we’ve done it.”

“I just think that we know when the time is right, we gotta take our shots down the field like we saw last week. But it doesn’t mean we need to revamp our offense. What we’ve done is we’ve been successful. We’ve won a lot of football games this year doing it and so we’ll do it, but we’ll also take our calculated risks down the field.”

Throwing downfield was the catalyst for the Steelers erasing a 17-point deficit in Week 16 against the Indianapolis Colts. A critical win for the Steelers to secure the AFC North and allow Roethlisberger and other key stars to rest for the regular season finale. That’ll have to continue in the playoffs if they potentially some of the most potent offenses in football like the Bills and Chiefs.