A little less than two months from today the 2021 NFL league year will start and at that time all 32 teams will need to be compliant with the Rule of 51 regarding the salary cap. These next seven weeks figure to include the Pittsburgh Steelers making quite a few moves in order to get salary cap compliment and especially if the league’s salary cap number comes in at the floor amount of $175 million.

With so much misinformation already floating around on other sites concerning the Steelers current salary cap situation and the things the team will need to do to be compliant in the next seven weeks, I thought I would begin setting the record straight on this Tuesday evening with a series of posts that go over the first major set of hurdles the team will have between now and March 17, the start of the 2021 NFL league year, in terms of them getting cap compliant.

To begin this series, we need to establish a current snapshot of the Steelers salary cap situation for 2021 as we sit here seven weeks out from the start of the 2021 NFL league year. The below snapshot is of the team’s Rule of 51 status and accounts for current expected salary cap rollover from 2020 and an estimated NFL salary cap amount of $175 million. All estimations below result in the Steelers being $30,058,665 over a $175 million salary cap number as we sit here in the latter part of January.

DISCLAIMER: We are forced to use $175 million as a projected league-wide salary cap amount until further notice due to that being the low floor amount the NFL and NFLPA collectively bargained ahead of the 2020 season getting underway due to possible economic impact caused by the coronavirus pandemic. Obviously, the greater the final number is for 2021, the more beneficial it will be for the Steelers. While I personally believe the 2021 league wide salary cap amount will ultimately come in higher than $185 million, that’s mere speculation on my part. Obviously, if the 2021 salary cap number winds up being flat and thus $198.2 million like it was in 2020, it considerably changes the Steelers salary cap outlook for the offseason. 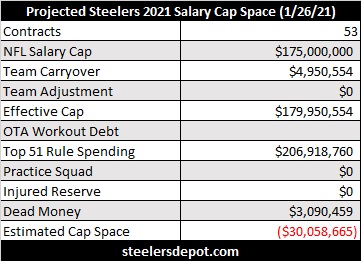 You can see at the bottom of this post a list of the 53 total players currently under contract with the Steelers as of January 26. You will also notice that tight end Vance McDonald is not on that list following his retirement last week.

Likely forthcoming costs prior to start of new league year in March:

WORKOUT BONUS ADJUSTMENT: All 32 NFL teams are expected to have an offseason adjustment placeholder of roughly $792,000 added to their salary cap for 2021 team offseason workout bonuses. To summarize, this is the total amount of CBA mandated workout bonuses that could be earned by the players during the offseason. This amount is first debited from the team’s salary cap and once training camp begins it will be removed and then replaced with the actual amount of workout bonuses earned by the players during the offseason.

PROVEN PERFORMANCE ESCALATOR INCREASES: In 2011, the CBA implemented the Proven Performance Escalator (PPE), which allows draft picks (third through seventh rounds) to receive an upgraded salary that is equivalent to the low Restricted Free Agent (RFA) tender if the player performed well over the first three years of his contract. The 2020 CBA added second round picks to this calculation and changed the criteria for earning the PPE in addition to adding additional compensation levels.  Under the revised PPE rules, meeting playing time thresholds (35%) still will earn the PPE at the low RFA tender level, while more playing time (55%) will earn the low tender, plus $250,000, while reaching the Pro-Bowl (first-ballot only) will be paid at the second-round RFA tender. The Steelers have one player from the 2018 draft who will earn the PPE this offseason and that’s tackle Chukwuma Okorafor. He will see his $920,000 base salary jump to the estimated low restricted free agent tender amount of $2.24 million. In short, Okorafor is expected to get an increase of $1.32 million for 2021 and it will go against the Steelers salary cap as well. That expected increase in salary is not yet accounted in our early offseason salary cap snapshot.

EXCLUSIVE RIGHTS FREE AGENT TENDERS (ERFA): Exclusive Rights Free Agents are players that must be tendered contracts of the league minimum, based on the player’s length of service in the league. Once tendered, these players are fully under the team’s control and are not free to negotiate with other teams. The Steelers have two players who are scheduled to become Exclusive Rights Free Agents (ERFAs) in March: Those players are ILB Robert Spillane ($850,000), ILB Marcus Allen ($850,000) and C/G J.C. Hassenauer ($780,000). If the Steelers were to tender all three in the coming weeks, the offset in the Rule of 51 based on the current players under contract would be just a $500,000 increase in cap cost.

RESTRICTED FREE AGENT TENDERS (RFA): Restricted Free Agents are players whose contracts have expired and who have three years of accrued service time. The Steelers must decide if they want to tender the player with an RFA offer. Once tendered, another team can still sign the player to an offer sheet, but the Steelers then have seven days to match that offer sheet and thus retain the player under the terms of that tendered offer sheet from the other team. If the Steelers were to choose not to match the RFA offer sheet, they would then receive compensation based on the level of RFA tender they had made to the player. The Steelers have 2 players who are pending Restricted Free Agents (RFAs) and they are OLB Olasunkanmi Adeniyi and wide receiver Ray-Ray McCloud. If either are restricted tendered by the Steelers, the level would likely be the lowest one and thus in the currently estimated amount of $2.24 million.

Part 1 Summary: Please note that this 2021 salary cap snapshot and look ahead only takes the Steelers to the start of the new league year. While other offseason costs certainly await the Steelers such as draft class, undrafted free agents, practice squad, 52nd and 53rd roster spots and in-season cap space allotment, that’s not the focus of this series just yet. The first focus of this series is to project how the Steelers will go about getting themselves cap compliant, which is the biggest part of the offseason process. In the second part of this series, I will focus more on the path the Steelers are likely going to have to take to get cap compliant in the next seven weeks.

Credit: Some data used in this post came courtesy of Over the Cap, Joel Corry, and Ian Whetstone. 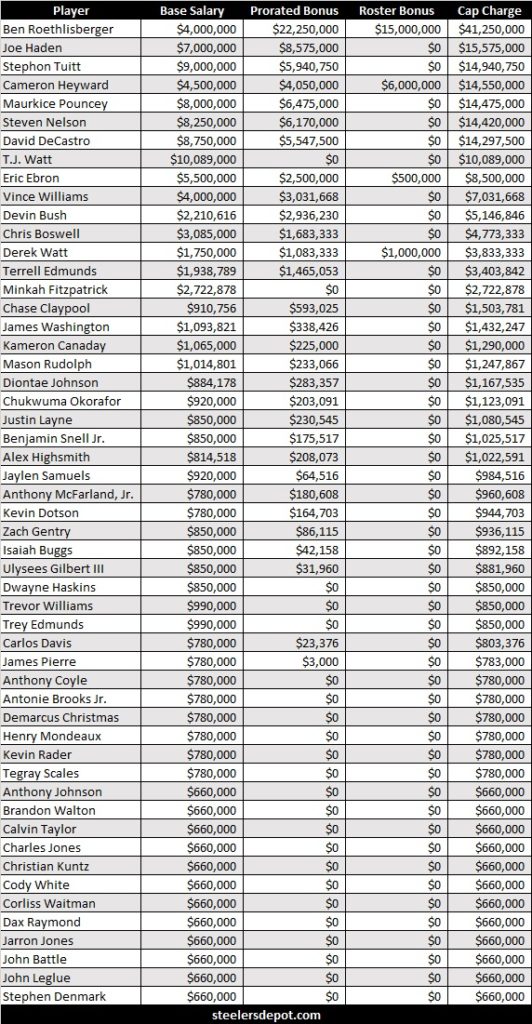