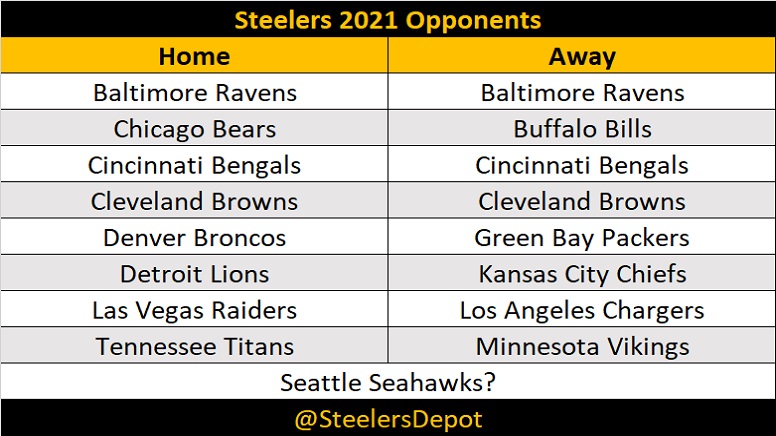 Now that all of the week 17 AFC games have been played, we now know all the teams the Pittsburgh Steelers will face during the 2021 regular season. Sunday opened with us knowing 13 of the 14 teams.

Thanks to the NFL’s rotating schedule, we’ve known for a while now that the Steelers will play the NFC North and AFC West divisions in 2021 in addition to their usual 6 games against the three teams within their own AFC North division, the Baltimore Ravens, Cincinnati Bengals and Cleveland Browns.

In addition to those 14 games, we’ve known for a week now that the Steelers will play the Buffalo Bills in 2020 due to both teams finishing in first place in their respective divisions in 2020 as the rotating schedule calls for them to p[lay the corresponding team in the AFC East division.

The remaining 2021 unknown opponent for the Steelers is the AFC South division winners, the Tennessee Titans. Like the Bills, the Steelers played the Titans during the 2020 season.

The Steelers five home game opponents outside the AFC North in 2021 will be against the Denver Broncos, Chicago Bears, Detroit Lions, Las Vegas Raiders and the Titans.

The Steelers five road games outside the AFC North division in 2020 will be against the Green Bay Packers, Minnesota Vikings, Kansas City Chiefs, Los Angeles Chargers and the Bills.

There is news these last few weeks that a 17th game will be added to the NFL in 2021 as well. According to several reports, that 17th game for the Steelers is expected to be against the 2020 NFC West winners, which is the Seattle Seahawks. Will that game be home or away for the Steelers? It’s hard to say for sure but early speculation is that the Steelers will host the Seahawks, if indeed that’s their extra opponent in 2021.

The times and dates for the Steelers 2021 schedule won’t be announced until sometime in April or May.