The Pittsburgh Steelers seemed to lack explosive playmaking throughout the 2020 season.

A good place to begin exploring this is by looking at running and/or wide receiver screen passes. In general, these passes end up being charted as negative air yardage. In this case, playmaking can be evaluated by calculating the overall net yardage gained after the receiver receives the negative air yardage pass.

The more net yardage gained – calculated from the line of scrimmage due to the limitations of the data – means more playmaking ability. This is, of course, a slight overgeneralization. The receiver catching the ball on these screen passes is still at the mercy of proper blocking in front of him which is why doing this as an individual statistic is not as telling as doing it as a team statistic.

Based on this calculation, the Steelers are not in a good place.

As seen in the table, the Steelers have a net air yardage of -1.6 on those passes that are likely charted as screen passes to either the running back or wide receivers. In terms of air yardage, the Steelers throw, on average, some of the shallowest screen and bubbles passes in the league. Only Matt Ryan and the Atlanta Falcons throw these types of passes closer to the line of scrimmage at -1.5 air yards.

However, despite starting their passes second closest to the line of scrimmage compared to the rest of the league, the Steelers are the fifth worst team in the NFL at gaining yardage off these screen or bubble passes.

On the other side of the spectrum, the San Francisco 49ers throw, on average, 2.9 yards behind the line of scrimmage on screen and bubbles passes but have turned those plays into an average net gain of 8.5 yards (based on an average of 11.3 YAC).

Simply put, the playmaking ability from the Steelers’ running backs and wide receivers was largely nonexistent on screens and bubbles passes.

To further contextualize this, let us look at another critical situation in NFL games that often requires playmaking ability: throwing on third down with minimal yardage to go.

Specifically, let us examine how well the Steelers’ wide receivers use yards after catch to get a first down, on third down, when the air yards alone are not enough to move the sticks.

In this case, we will look at all third-down plays, with less than ten yards to go, wherein the total air yards were less than the yards needed, but the yards after catch successfully moved the sticks.

After crunching the numbers in the R programming language, the results are quite surprising.

In these specific situations – and despite the horrid playmaking ability on screens and bubbles as highlighted above – the Steelers are in the top-third of the league at converting third down passes when the air yardage was less than total yards needed for the first.

At a 38.4-percent conversion rate, the Steelers seem to have more playmaking ability receiving the ball upfield than when catching the ball at the line of scrimmage or slightly behind. Slightly unrelated, but the difference between the Kansas City Chiefs and the Detroit Lions in this analysis is startling.

Lastly, since the Steelers are in the top third of the league in these situations, which specific receivers are doing the playmaking to get a first down with their yards after catch? 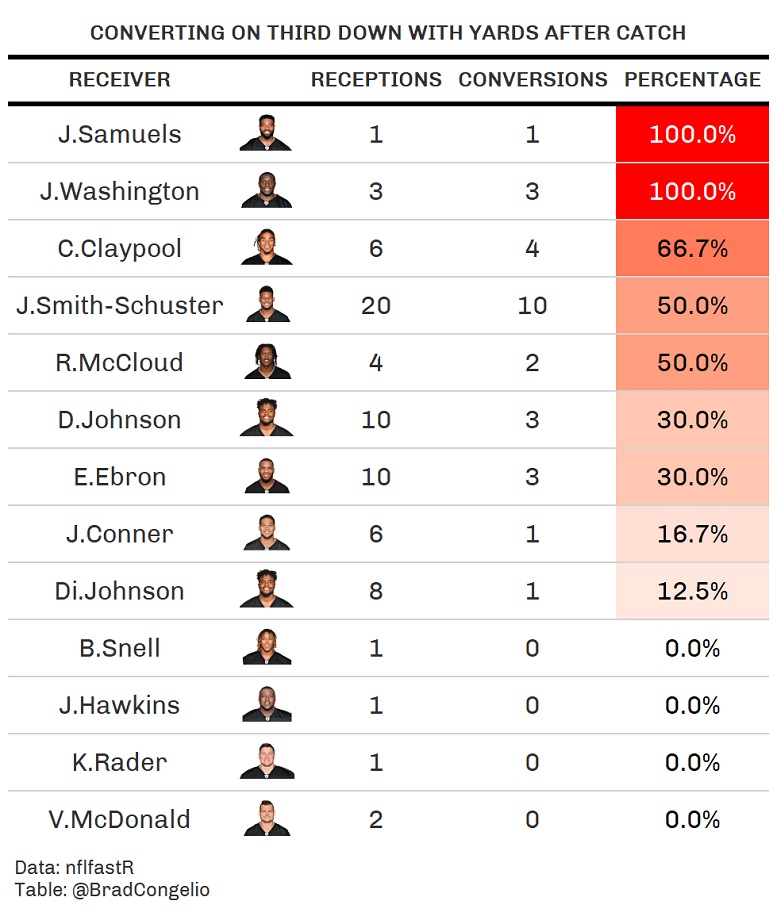 I made the decision to not filter out for a minimum number of receptions, which is why Jaylen Samuels, Kevin Rader, Benny Snell, and Vance McDonald are included with a minimal number of catches. As well, I absolutely refuse to remove Jerald Hawkins. Those big guys don’t get the opportunity to show up on a chart like this often.

Given the circumstances, JuJu Smith-Schuster and Chase Claypool are likely the biggest playmaking threats to get a first down when the air yardage neccsitates using yards after catch to get it. In fact, Smith-Shuster leads the league in conversions in these scenarios with ten (though his 50-percent conversion rate, while near the top, is not the best).

In the end, the analytics point to the Steelers being one of the worst teams in the league at playmaking off of screens or bubble screens. On the other hand, things are somewhat promising when needing playmaking slightly downfield to get a first down. Perhaps, in the future, I will “open the data” up to explore all downs and distances to go, rather than just third-down situations as in this article. However, the contrast between the two scenarios – at least with the Steelers – is pretty clear.