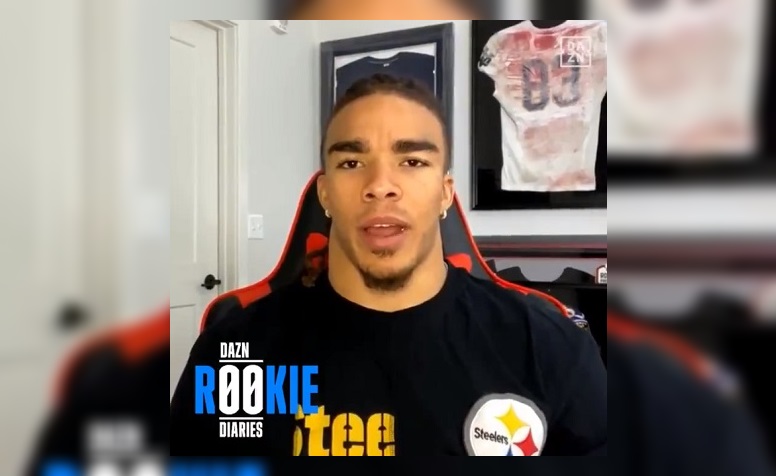 Pittsburgh Steelers rookie wide receiver Chase Claypool certainly has had a lot to say about the Cleveland Browns since Sunday’s loss to them at Heinz Field in the Super Wild Card round of the playoffs. On Monday, Claypool did a TikTok interview and during it, he said he expects the Browns to “get clapped” this weekend by the Kanas City Chiefs, so “it’s all good. Since then, Claypool has doubled-down, so to speak, when it comes to his weekend prediction.

During an interview with DAZN, Claypool was asked about his Browns getting “clapped” on Sunday by the Chiefs and if he still stands by what he said.

“Yeah, I mean, not like I’m praying on them getting beat really bad, but someone had just asked me a score prediction and that was kind of a way of me saying that I think the Chiefs are gonna beat the Browns,” Claypool said. “I think if the Browns had won with more class [against the Steelers] then I wouldn’t have been so salty about it. But them mocking JuJu [Smith-Schuster] during the game and after the game, it just didn’t sit right with me.”

The Browns players were obviously mocking Steelers wide receiver JuJu Smith-Schuster for comments he made about their team on the Friday before the game. While Smith-Schuster’s were seemingly taken out of context to some degree, which Claypool also attempted to explain during his Monday TikTok interview, the damage was already done and it’s in the past by almost a week now.

During his DAZN interview, Claypool was asked to explain the mocking that Smith-Schuster was receiving from Browns players Sunday night.

“They were just super classless against JuJu you toward JuJu what they’re saying on the field towards the end of the game,” Claypool said. “So, you know, I’m not gonna have respect for a team that doesn’t have respect for us.”

Claypool was next reminded about some comments made toward him from a few Browns players since his Monday TikTok video. One of those comments came Browns linebacker Sione Takitaki.

“It’s really just funny. He’s salty with the loss. You can hear it in his voice. We don’t really dwell, put too much time about it,” TakiTaki said per Keith Britton of 92.3 FM The Fan. “Obviously, we got the win, so we got the last laugh … leave it at that.”

“Just go on vacation already young fella,” Clayborn tweeted, in response to a tweeted out video of Claypool’s TikTok interview.

So, what does Claypool think of those Browns players clapping back at him?

“Yeah, I mean, I don’t mind it, like they can enjoy the win and another week of football, but they’ll be on the couch right next to me next week, so it’s all good,” Claypool said.

Since the DAZN clip made the rounds on social media on Thursday, Claypool jumped on Twitter to attempt to cool things down a bit.

“This is an OLD interview happening right after the fact,” Claypool tweeted. “Talked to some friends on the browns and it’s all love! Hoping them nothing but the best for the rest of playoffs! Go rep the division.”

Claypool is obviously making some media rounds right now due to him recently signing an endorsement deal with Nike’s Jordan brand. In short, I don’t think we’ll be done with Claypool interviews until after the Super Bowl. If that’s the case, expect Claypool to be asked several more questions about the Browns and especially if Cleveland winds up getting “clapped” by the Chiefs this coming weekend.

Claypool had an outstanding rookie season, earning the Joe Greene Great Performance Award as the Steelers’ top rookie for 2020. The Notre Dame product caught 62 passes for 873 yards and nine touchdowns in 2020 and rushed for a pair of scores, tying Louis Lipps for the most touchdowns scored by a Steelers rookie with 11.

This is an OLD interview happening right after the fact. Talked to some friends on the browns and it’s all love! Hoping them nothing but the best for the rest of playoffs! Go rep the division 😝🤙🏾 https://t.co/GuQJWHeB2U