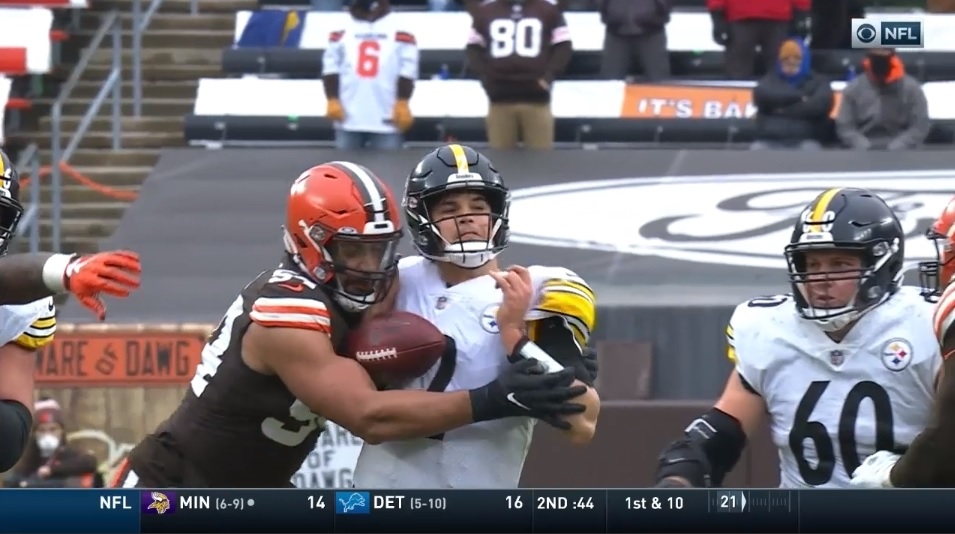 Foe the final time in the regular season, breaking down the one sack allowed by the Pittsburgh Steelers in Week 17 against the Cleveland Browns.

Once the postseason ends, we’ll do a year-end regular season recap, as we do every season.

Two issues here. One on the line, one on the quarterback. But let’s start with the line. RT Chukwuma Okorafor gets beat by LDE Oliver Vernon here. Okorafor is bending at the waist, potentially losing his footing on his punch a bit (field conditions weren’t great Sunday) and Vernon is able to get past him with a two-handed swipe. 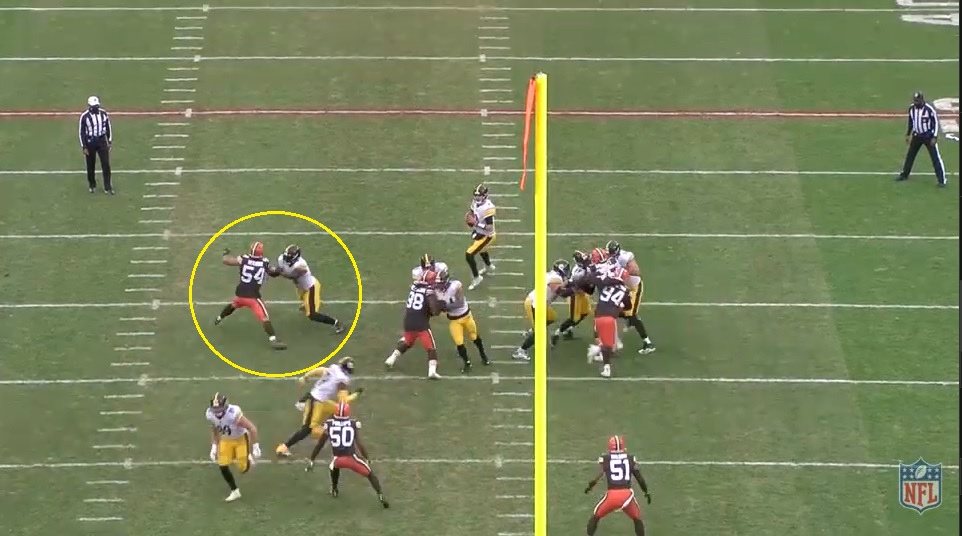 With RG David DeCastro occupied by the DT, Vernon now has a free shot to the quarterback. He takes Mason Rudolph down and knocks the ball loose, though Rudolph manages to keep it, mostly because Vernon squished the ball back into Rudolph’s possession.

But Rudolph isn’t blameless here either. Knocking QBs for missing open receivers can be overdone, it’s easy to armchair things, but Rudolph is slow on his reads here and has underneath options. Take a look from the overhead view. Browns are playing a soft, two-deep zone. Looks like Rudolph’s first read is Vance McDonald on a deep curl over the middle but the hook zone LBs get depth and take it away. Rudolph needs to go through his progression and hit one of the underneath options, either JuJu Smith-Schuster on the shallow cross or Benny Snell on the checkdown.

Rudolph moves to Smith-Schuster and is about to throw but he runs out of time. The pressure gets home.

Okorafor got beat here, there’s no question about it, but Vernon did slip trying to corner. From snap to throw, Rudolph had about 3.5 seconds, a long time in the NFL. And he had options if he got off his first read (McDonald) when he saw the loose coverage and hit an underneath option. This is 2nd and 4, not 3rd and 9, so you don’t need to throw to the sticks here. Hitting Smith-Schuster or Snell probably nets you the first down anyway.

Sack blame depends on your perspective. What angle you’re watching. Watch the end zone view and you put it on Okorafor. Watch the aerial, you assign it to Rudolph. Ultimately, I’ll put half on each guy to close out the year.