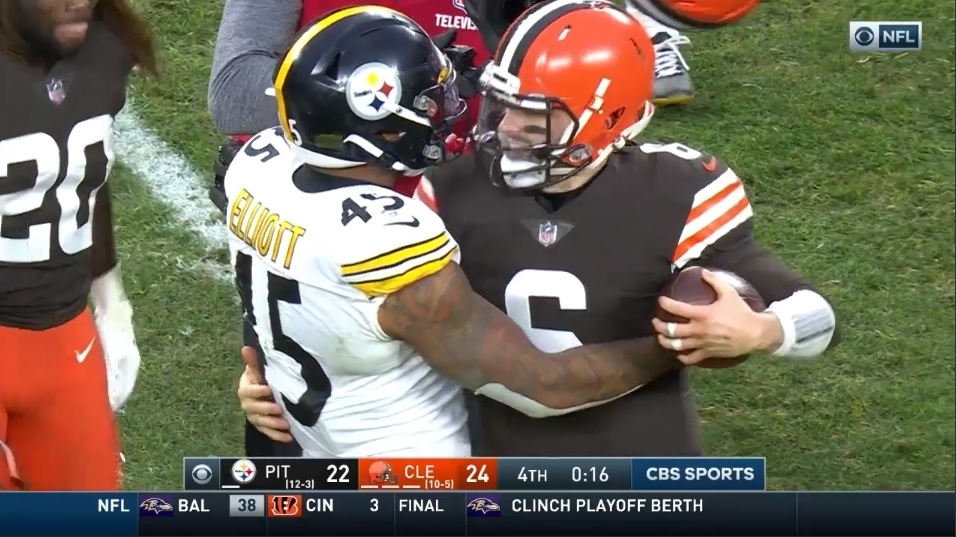 Once Mike Tomlin decided to sit Ben Roethlisberger, fans began guessing which starting players would sit with him. Mason Rudolph’s time to shine was arriving. The Cleveland Browns ravaged by players either testing positive for the COVID-19-virus or isolated due to contact tracing severely weakened their defense.

However, the Steelers discovered their own problems. These were self-inflicted. Joe Haden along with Eric Ebron and newly signed player Cassius Marsh opted to get together with their children. Pictures posted on social media and unsurprisingly Joe Haden tested positive and lost for both the final regular season game and wild card game. Ebron and Marsh sat out the game with their eligibility to play contingent on continued negative tests.

The Steelers punted the ball on their first possession. However, Mason Rudolph did complete a third down pass to Chase Claypool to prevent a three and out. The Browns encountered little resistance on their first drive. Chubb started with an 11-yard run. Mayfield completed passes to Jarvis Landry and Austin Hooper for first downs. Then from midfield, Chubb ran 47 yards for a touchdown. Minkah Fitzpatrick ineffectually tried to stop him. The defense never forced a third down on the drive.

The Steelers and Browns exchange punts on their next possessions. The first quarter ends with the Browns up 7-0.

The Browns get another explosive play on Higgins catch for 42 yards with Fitzpatrick pushing him out of bounds. Chubb carries the ball twice to the four-yard line. The Steelers defense makes a great stand. Fitzpatrick breaks up a pass in the end zone. Defense stuffs a run, and David Njoku can’t come down inbounds with the ball. Browns settle for a field goal and it’s 10-0.

The Steelers conduct two scoring drives of their own. Mason Rudolph connects with Diontae Johnson for 41 yards on a third and 11 play taking the ball to the 25. Joshua Dobbs comes in and gains 13 on a keeper. Matthew Wright comes on for the 29-yard field goal.

The second score starts with 2:25 left in half. On third and nine, JuJu Smith-Schuster catches a short pass and runs out of bounds after gaining 26 yards. Olivier Vernon sacks Rudolph who somehow holds onto the ball. Matthew Wright drills a 46-yard field goal. Folks were nervous since he does not have a strong leg.

CLOSE BUT NO CIGAR

CREEP NEAR BUT THROW BALL AWAY

The defense shut down the Browns to start the second half. Jayrone Elliott sacked Mayfield after they got a first down. On fourth and one, Joe Bitonio false started forcing a punt. The Steelers take advantage and score on the ensuing drive. On third and seven, Mason Rudolph passes to Chase Claypool for 41 yards. Following two incompletions, James Conner catches the ball over the middle but can only gain eight of 10 needed yards. Wright kicks his third field goal to make it a one-point game. 10-9.

Mayfield takes charge and shows why the Browns drafted him. He completes a third down pass to Njoku to keep drive alive. On next play he scrambles for 28 yards. He sets up a first and goal with a 10-yard pass to Hodge. Mayfield completes the drive with a two-yard touchdown pass to Hooper. Browns 17-9.

The Steelers tried to answer but on third and nine, Rudolph throws an interception. Benny Snell missed blocking pass rusher and Rudolph threw the ball toward JuJu. Probably should have taken the sack. Instead, the Browns have the ball at the 20.

The defense can’t hold Browns on third and eight. Mayfield throws for first down at the three. One play later, Jarvis Landry runs it in for the touchdown. Browns up 24-9 early in fourth quarter. Looks like you can stick a fork into the Steelers, but they aren’t done yet.

Rudolph operates exclusively from shotgun formation. First play is 14-yard completion to Vance McDonald. Conner picks up a first down on the ground. Claypool gets another with a 10-yard reception. Rudolph pass to Kevin Rader on third down is incomplete. On fourth down connects with Diontae Johnson for eight yards and a first down. On a fourth and 10, Rudolph connects with Chase Claypool for a 28-yard touchdown. It’s 24-16.

The Browns drive down the field after the kickoff. Stephon Tuitt sacks Mayfield on third down to set up fourth and seven. Mayfield throws incompletion and Steelers offense back in business with 3:37 to play.

On third and 10, Rudolph finds JuJu for 13 yards. Then connects with Diontae Johnson for 47 yards to the 10-yard line. Rudolph throws touchdown pass to JuJu. However, with a chance to tie, Rudolph throws high to Chase Claypool who cannot come down with the ball.

The Steelers attempt an onside kick down 24-22 with just 1:23 to play. Initially, it looked like Steelers all over the ball but somehow, the Browns come up with it. Chubb runs for eight. Then on third and two Mayfield picks up three. Game over.

Steelers achieve two of five keys. Did very well on third on short but the failure on two-point conversion critical failure.

Most of the Steelers played with heart in a losing cause. The Steelers have played for a long time with no real break so Mike Tomlin’s decision to rest key players is hard to argue with.

The real game is next week. Chubb only ran the ball 14 times. Next week he will run the ball a lot more. On the one hand, the Steelers will get huge help with T.J. Watt, Cam Heyward and others returning o the line-up. But that does not equate to necessarily shutting the Browns running game down. Mayfield is extremely competitive in the Philip Rivers mold.

I love Joe Haden. He has been a huge asset to the Black and Gold. However, he along with Eric Ebron and Cassius Marsh made a critical error. While the Steelers escaped significant injuries during the game. The off-field decisions of these three players has the same effect. Haden will not be available to play in the wild card game. We must wait for the test results for the others.

The Browns played well enough to win to end the regular season. My question is whether Ben Roethlisberger and the Steelers will play well enough to start the postseason with a win?

Hope the Steelers can light them up after next week. Here we go.

I always like to include a music selection. Next week Cleveland Browns come to Pittsburgh. Here is Won’t You be My Neighbor sung by Mr. Rogers.