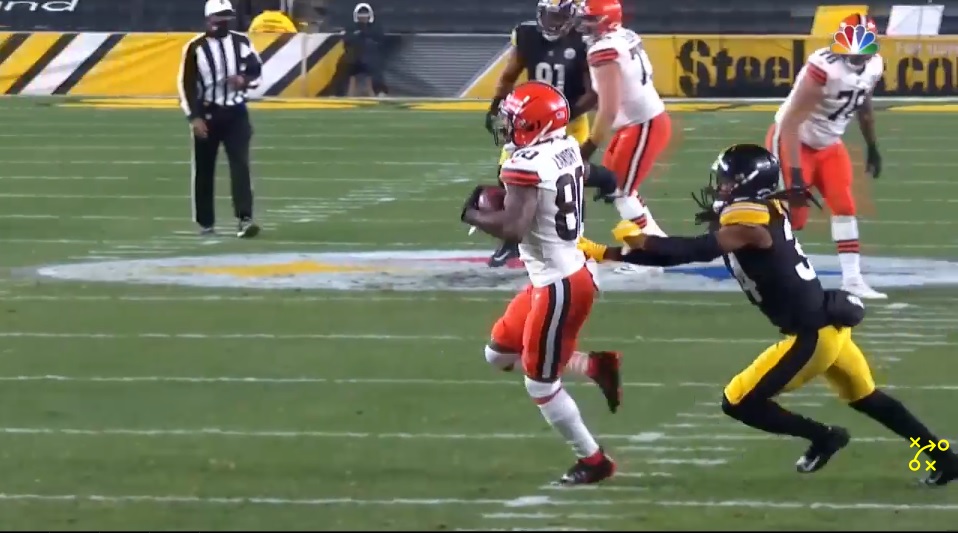 Depending on when you’re reading this story, we’re nearly a week removed from the embarrassing 48-37 Wild Card Weekend loss to the Cleveland Browns.

Time does not heal all wounds, apparently, because I – for one – and still embarrassed by that loss. Rewatching the debacle a couple of times to track missed tackles just hurt worse.

While the number isn’t the worst tackling performance of the year for the Pittsburgh Steelers, it was pretty darn ugly.

Let’s dive in and officially put that game behind us as we move into the off-season.

There was a theme down the stretch in the regular season with the Steelers’ defense when it came to tackling: the secondary was really struggling, especially against the run as running backs reached the second level.

That reared its ugly head in the Wild Card upset as Terrell Edmunds, Minkah Fitzpatrick, and Mike Hilton combined for 8 of the 14 missed tackles on Sunday night.

Fitzpatrick played a decent game overall, coming downhill to stop the run at a decent pace as the Browns gashed the first two levels of the Steelers’ defense on the ground.

Three missed tackles from an All-Pro safety in a playoff game simply isn’t acceptable though.

Neither is the effort Edmunds displayed on Sunday night. He was incredibly passive, which leads me to believe he simply wasn’t healthy and was worried about his injured shoulder, which caused him to miss the Week 17 finale.

The Browns did a great job here getting Jarvis Landry isolated against Mike Hilton in the slot, especially coming off of the motion.

After that, it’s an easy pitch and catch between Baker Mayfield and Landry to convert. Watch Edmunds though. That’s about as poor of an attempted tackle you’ll see from a starting NFL safety.

He ole’s him. Embarrassing.

Landry sprints right on by and later breaks a tackle attempt from Hilton before diving into the end zone to make it 14-0.

Just two plays after failing to come downhill and pop Mayfield out of bounds short of a first down, Edmunds turns in yet another rough rep in the tackling department.

Nick Chubb is a tremendous running back, don’t get me wrong. He’s not known for having a ton of wiggle in the open field though.

Here, he jukes Edmunds out of his jock strap, leaving Edmunds to reach for air as Chubb skates right on by, moving the chains on a drive that eventually led to a touchdown and a 35-7 lead for the Browns late in the first half.

Finally, in the fourth quarter after the Steelers bizarrely punted on 4th and 1 year midfield, the Browns answered back quickly with a Chubb screen that resulted in another 40-yard touchdown.

The Browns catch the Steelers in a blitz and hit the screen perfectly. But man, Hilton and Vince Williams have to make this stop. Hilton goes low for the ankles of Chubb and knocks Williams off the tackle by taking his legs out.

It’s an ugly rep, and when ugly reps happen with this defense in the tackling department, there’s a good chance they end in six points.

On a third and three, pressure forced Ben Roethlisberger to have to hurriedly check it down to Conner over the middle. As soon as Conner catches the ball, he’s hit by Cleveland linebacker Sione Takitaki. Fortunately for the Steelers, Conner slides out of the tackle and converts the first down, keeping the drive alive for the time being.

Early in the second quarter with the Steelers down 21-0, James Washington made a heck of a play forcing a missed tackle on his first catch over the middle.

Washington does a great job of changing his angle just slightly, forcing Cleveland safety Karl Joseph to miss in space.

I did not give Washington a forced miss on Cleveland linebacker Jacob Phillips on the spin because Vance McDonald is blocking him slightly. Either way, it’s a heck of a play by Washington.

I’m looking forward to him getting more run next season.