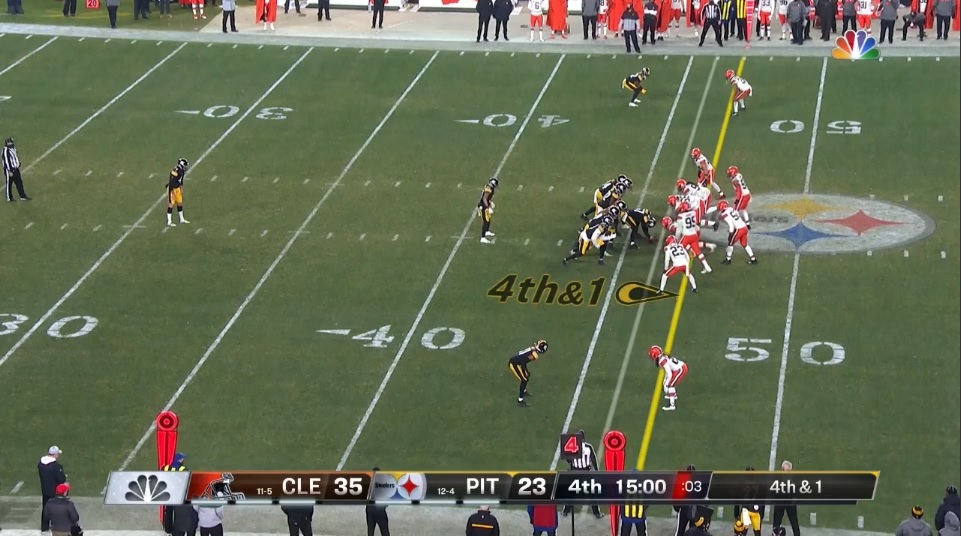 Mike Tomlin was trying to play the field position game.

Instead, he gave the game away.

Facing 4th and 1 on their own 46 on the first play of the fourth quarter, trailing 35-23 but cutting into the Cleveland Browns’ deficit, Tomlin decided to punt the ball away. Jordan Berry’s boot went about two yards too far, landing in the end zone, and netting the Steelers only 39 yards. The Browns took the ball and drove 80 yards on just six plays, ending in a Nick Chubb 40 yard score. That essentially ended the game.

After the game, Tomlin asked why he punted.

“We had had some stops,” he said in a somber, post-game press conference. “I wanted to pin them down and provide a short field for our offense. We had maybe two or three consecutive stops. I just wanted to keep the momentum going in terms of field positioning. But we weren’t good enough in terms of doing that.”

Tomlin’s correct in the way the defense had tightened the screws the previous possessions. Cleveland punted the ball on their first three possessions to open the second half, allowing the Steelers to turn a 35-10 score into a 35-23 contested ballgame.

It’s likely the Steelers…let’s say, mixed results on 3rd and 4th and 1 played a factor as well. Pittsburgh began the game 1/2 in those moments, both dives to FB Derek Watt. Pittsburgh finished the regular season as the league’s worst “get a yard” offense.

Hindsight is 20/20. If the Steelers’ punt pinned the Browns back, the defense gets a stop, it’s a great decision. If the Browns flip the game back in their favor, as they did, it’s a bad call.

But Tomlin mentioned the key word. Momentum. Pittsburgh had all of it in that moment. Roethlisberger was picking the Browns’ prevent defense apart. Cleveland was playing on their heels and you could feel the shift in the game. Going for it was arguably the right decision, before the punt and definitely after seeing the outcome. And Tomlin, who famously says he doesn’t live in his fears, took the more conservative option.

His decision-making overall is certainly worthy of questioning after another one-and-done playoff defeat.