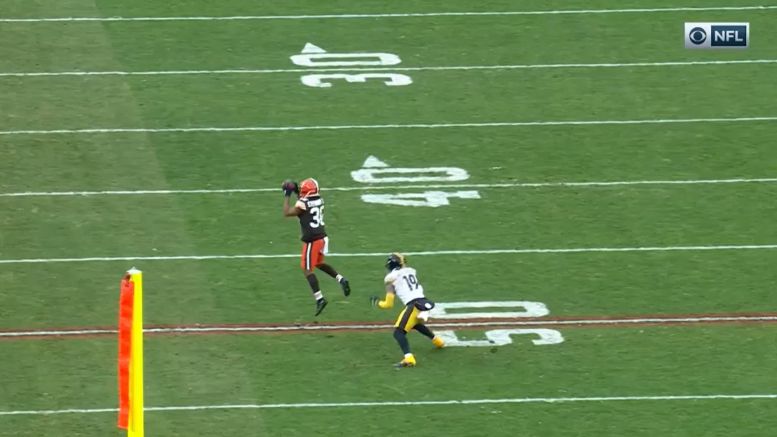 The Pittsburgh Steelers entered the regular season finale tied with the Miami Dolphins for the most takeaways in the NFL at 27. They had failed to come up with any takeaways in two of their previous four games entering the finale, but seemed to be back on the right path after getting tow last week.

On Sunday, the Dolphins got two more takeaways to finish the year with 29, despite being blown out and embarrassed by the Buffalo Bills. The Steelers failed to come up with a takeaway as well, and also lost, but kept it close, and in fact their lone giveaway was probably the difference in the game.

Coming with 1:42 to play in the third quarter and facing a 3rd and 9 from their own 42, the Steelers faced a blitz from the Cleveland Browns defense that put pressure in Mason Rudolph’s face. The pressure forced him to make a bad decision and force a ball vertically that was intercepted and returned to the 20-yard line.

The Browns would capitalize in the momentum and field position to score within four plays, ending the drive with a three-yard Jarvis Landry rushing touchdown, which at the time give them a 24-9 lead. The Steelers would come back and score 13 unanswered points, but fell two points short.

“We knew we had to take care of the ball. We knew that if we didn’t take care of the ball, we needed to support our offensive unit”, head coach Mike Tomlin said after the game. “When you really look at it, that sequence is probably the most significant in terms of determining the outcome of the game”.

Even though they finish overall with one of the best turnover margins in the league, they now have a 1-3 record on the season in games in which they lose the turnover battle this season, their lone win coming against the Tennessee Titans.

They enter the postseason having lost four of their final five games, and they failed to win the turnover martin in any of those four losses. In fact, they failed to record a single takeaway in three of those games, and had two takeaways to two giveaways in the other.

It should be noted that the interception that Rudolph threw should have been negated due to a roughing the passer penalty on the play, though it’s difficult to say that it actually affected the throw itself. The young quarterback must still take the blame for that.