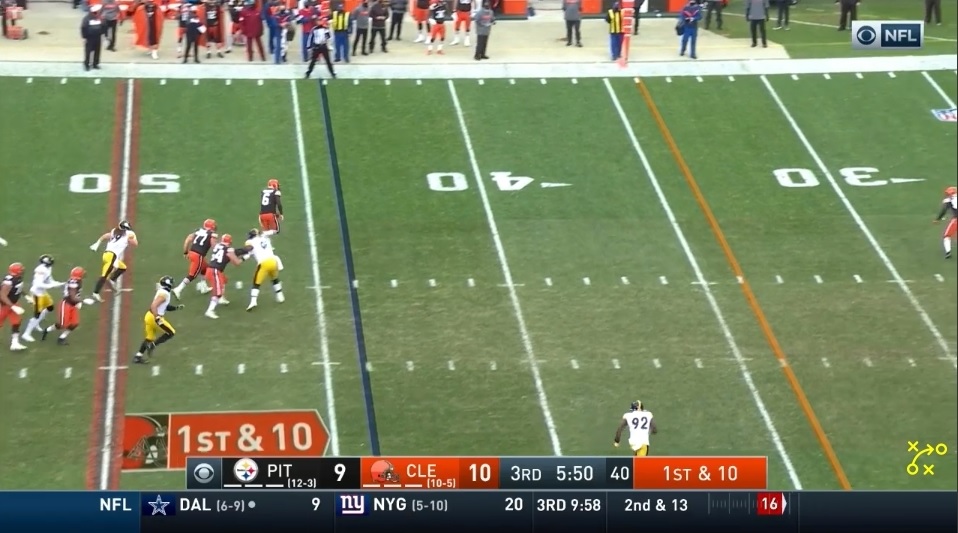 How do you stop Baker Mayfield? According to Keith Butler, the first thing you have to do is contain him. That’s the Pittsburgh Steelers’ mission each time Mayfield drops back to pass in Sunday night’s Wild Card game. Butler says his group needs to do a much better job of that this weekend than they did this past one.

Speaking with local reporters Thursday, Butler detailed the importance of keeping Mayfield in the pocket. And what went wrong in Week 17.

“What happened to us in the game is a lot of times we will bring an extra guy sometimes, and then the guy who has coverage of somebody in the backfield, we usually hug him up and then close down the escape lane,” he said via team transcript. “We messed up a couple times and the quarterback takes advantage of it. He had something like a 40- or 50-yard run on it because we weren’t on the right guy. We were covering the wrong guy at the time. The guy in the backfield, we should have been covering that guy and then we would have hugged him up and we wouldn’t be talking about him scrambling.”

The play Butler’s seemingly referring to is a 28 yard run by Mayfield in the third quarter of the Browns’ 24-22, Week 17 victory. Marcus Allen is the extra guy who blitzes on the play, a six man pressure, and it appears Avery Williamson was responsible for the “hug” blitz, referring to covering Chubb but then blitzing/spying if he stays in to block.

Williamson dropped into coverage to carry the tight end. When Chubb picked up Allen’s blitz, Mayfield found an escape lane to a big gain.

Rush lane integrity has been critical all year given the number of scrambling QBs the Steelers have faced. Most of that coming in their own division. Twice against the Ravens (Lamar Jackson and Robert Griffin III), twice against Baker Mayfield, and once versus Joe Burrow (then the Steelers too late found out that Ryan Finley could run, too). Rushing the QB is like coverage. It all has to work together. Unless the scheme is designed to allow it, that’s called a “two-way go,” players can’t freelance. And here, the coverage has to work in tandem with the rush to account for the QB running.

As Mayfield did in the play above, he ran while moving to his left. Common for most right-handed quarterbacks when moving to their left.

It’s obvious to most fans but Butler knows he’ll be seeing the Browns attempt to get Mayfield on the move this weekend.

“They boot him, they do what we call dash or rollout passes and stuff like that to get him on the edge.”

Dash may have multiple meanings by now but they’re designed, long rollouts. Dick LeBeau described how to defend them in this 2002 playbook as a coach of the Cincinnati Bengals.

The Browns ran it at least once Sunday at the end of the first half, just as LeBeau’s notes describe. It was a one-man route, nine blockers, and Mayfield’s throw downfield sailed 20 yards out of bounds. Butler said his goal is to force Mayfield to make plays from within the pocket.

“The thing we have to do if make sure we don’t let him out much and we keep him in the pocket and make him see if he can see over those guys in front of him.”