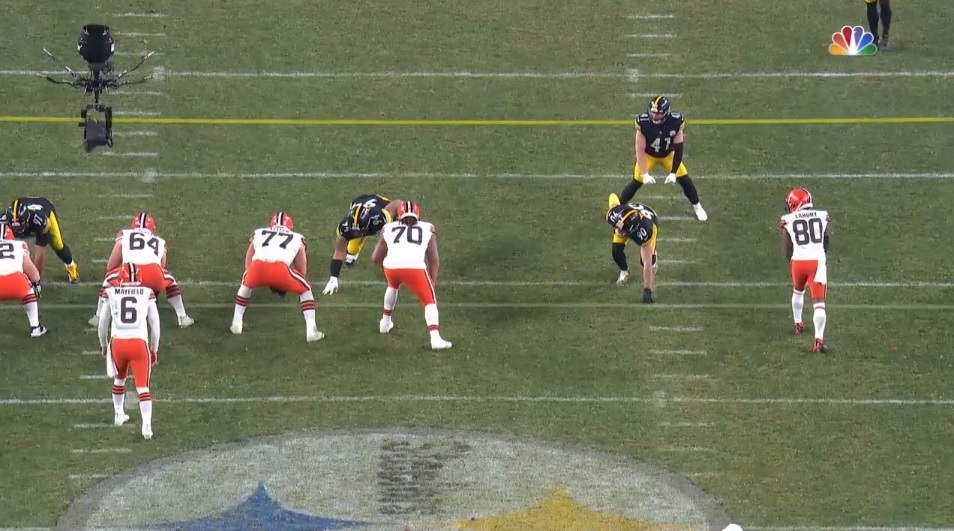 After the Week 17 finale, we highlighted one looming issue in the rubber match between the Pittsburgh Steelers and Cleveland Browns. Baker Mayfield picked apart the Steelers out of empty, heavy personnel. Take the field with multiple TEs, keep the Steelers in their base defense, spread them out, and pick apart man or zone coverage. Mayfield went 7/9 for 72 yards and we warned the Browns were likely to do it again in the Wild Card game.

Granted, not as often in this game as Week 17. But when the offense needed a big play, a third down conversion or to get back on schedule, they knew exactly what to call.

Pittsburgh tried some different ways to attack it but ultimately, feel into their old ways. Let’s break it down.

On two of Mayfield’s throws, the Steelers stayed in their base defense. On the other two, they were in nickel. That’s how we’ll separate the following four clips.

Which is what the Steelers were in most of last week. It’s hard to blame them. With Cleveland’s potent run game, when the Browns bring out their big people, you’re compelled to stay in base. You don’t know if they’re going to spread the field or stay in tight.

This comes on third and two early in the fourth quarter, right after Mike Tomlin’s controversial decision to punt on 4th and 1. Tomlin banked on the defense getting a stop and this was their chance. But Cleveland gets the matchup they want. Steelers playing split field coverage. Zone to the bottom, man up top, with Minkah Fitzpatrick looking to rob/cut any crosser.

Linebacker Robert Spillane gets matched up on the #3 receiver (furthest slot), WR Jarvis Landry. It’s a total mismatch. Landry runs a whip route to shake him loose and creates space as he breaks outside. With everyone else manned up and Fitzpatrick looking to take away any in-breaking route, Spillane has no help. Mayfield hits him for a 17 yard gain, and a first down. Three plays later, Nick Chubb takes a screen 40 yard to the house, effectively ending the Steelers’ comeback.

Take a look at the play below. We’ve highlighted the Spillane/Landry matchup.

Here’s a less egregious but still important example. First time the Browns did it in the game. 2nd and 10 in the first quarter. Pittsburgh’s in their base and plays zone. Cover 3. Quick curl route by TE Austin Hooper, sitting down in front of LB Vince Williams and it’s a six yard gain.

It’s *only* six yards but the context is important. A 1st and 10 incompletion knocked them off schedule. Cleveland relies on its run game to set up third and manageable situations. This six yard completion got them back on track, setting them up for 3rd and 4. Where they could still run, throw short, boot out, the whole playbook was open.

What happened on 3rd and 4? Three step slant complete to Jarvis Landry, who took it 40 yards to the house. Can’t call that play if you’re in 3rd and 9. So the completion to Hooper was critical.

Pittsburgh did try to play some sub-package in these situations. Both came in higher-pass percentage situations, both on 2nd and 9. Where you’re willing to take the risk of them aligning heavy and running the football, getting 4-5 yards, and still having a few more yards to go on third down.

But the matchups still weren’t great. This is the least offensive example of the four. Steelers playing Cover 1 (man-free) with no bad matchups on the board. CBs on receivers, Spillane on a tight end. But Rashard Higgins runs a great route to stem inside and separate against Mike Hilton and Mayfield hits him for a 16 yard gain.

Hard to blame the design here. This is defended on paper as well as you can imagine. Browns just made a nice play.

Finally, a backbreaker. 2nd and 9, midway through the fourth quarter. Two-possession game. Steelers in nickel but again align Spillane on their #3, Landry. Again, the Steelers are running man coverage and Landry’s on an option route here. Head fake outside, Spillane bites in his impossible matchup, and Landry bursts away inside. 17 yard gain and the Browns are in field goal range. They bleed more clock before kicking it, making it a three-score contest, and the Steelers don’t get the ball back until there’s about five minutes left.

The Steelers did try to make a couple adjustments in the playoffs. Less two high, which was just killing them in Week 17, and taking a couple calculated risks by playing sub-packages.

But defending empty/heavy and receivers getting aligned as #3 has been a problem the Steelers have had forever. New England killed them with it. Keenan Allen made them look silly. And the Browns had success in back-to-back weeks. In the two games, Mayfield went 11/13 for 128 yards out of these looks. Seven of his completions picked up first downs and the Steelers got pressure on just two of 16 total dropbacks, only 12.5% of the time.

It isn’t easy to have an answer to this. Defending empty in general sucks as a DC. I’m not sure there’s any team that defends it well. But Pittsburgh – and we’ve said it before – can do a much better job.

Putting blame on a specific person, Mike Tomlin or Keith Butler, isn’t the point here either. Blame falls on the defensive coaching staff. They all can spot these issues; if I can point it out, they can too. They knew it was coming. They’re all part of the meeting rooms and gameplan. At this point, I don’t expect these things to get any better. Opposing offenses know when they need an easy completion, this will work.