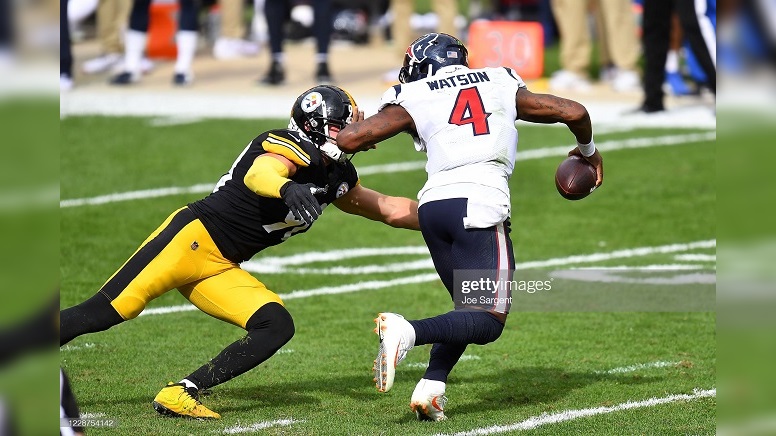 According to a few Thursday morning reports, Houston Texans quarterback Deshaun Watson continues to request he be traded even on the heels of the team hiring David Culley be the next head coach. With that news that Watson still wants out of Houston as soon as possible running even more rampant, quite a bit more trade speculation is beginning to surface. Bill Barnwell of ESPN has now even gone as far as to speculate what the other 31 NFL teams would need to do to acquire Watson from the Texans via a trade. Within his latest article, Barnwell has quite the interesting scenario for the Pittsburgh Steelers when it comes to what it would take for them to acquire Watson from the Texans via a trade.

According to Barnwell, the Steelers would need to send the Texans their 24th overall pick in 2021, their 2022 first-round pick, their 2023 third-round pick, and both outside linebacker T.J. Watt and fullback Derek Watt to the Texans to get Watson in return. For good measure, Barnwell has the Steelers also receiving the Texans 2023 fifth-round selection as compensation along with Watson.

Barnwell goes on to explain his reasoning for putting together that specific package for the Steelers to acquire Watson from the Texans.

Technically, the Steelers can fit Watson under their cap if they were to move on from Ben Roethlisberger, which would free up $19 million in space. (I assume that Roethlisberger would retire if he were traded to another team, making this idea a non-starter.) Pittsburgh is in rough cap shape and needs to use these first-round picks to replace outgoing free agents such as Alejandro Villanueva and Bud Dupree.

The Steelers also need to re-sign their two young defensive stars T.J. Watt and Minkah Fitzpatrick, and this would be a roundabout way of using some of that defensive core to build their future on offense. The chances of the Steelers moving on from Watt and Dupree in the same offseason are basically nil, but Pittsburgh could at least try to use the $10.1 million it saves from trading Watt to work on locking up Dupree. The Texans would reunite the Watt brothers in Houston, something previously only accomplished in sandwich commercials. This one isn’t much more than a pipe dream.

So, there you go. Currently, outside linebacker T.J. Watt is only under contract through the 2021 season after having his fifth-year option exercised by the Steelers last offseason. He’s now scheduled to make $10.089 million in 2021. That noted, Watt will sign a long-term extension with the Steelers at some point during this offseason that will likely result in him becoming the NFL’s highest paid defensive player at around $30 million per season.

As for fullback Derek Watt, him being thrown in as compensation in a trade for Watson is cute because of older brother J.J. Watt being with the Texans and thus such a deal would reunite the three siblings in Houston. For now, Derek Watt is under contract with the Steelers through the 2022 season and that obviously could change between now and March 17 should the fullback be deemed worthy of being an offseason cap casualty due to his lower-than-expected overall production in 2020, his first season with the Steelers.

So, while it would never happen, at least I don’t think it would, you have to wonder if the Steelers would even remotely consider giving up two first-round selections and a third-round selection in addition to the Watt brothers to get Watson and a measly future fifth-round draft pick in return. Obviously, the team would need to part ways with quarterback Ben Roethlisberger in one way or another for such a deal to take place. Dumping Roethlisberger and trading away the Watt brothers would also instantly free up roughly $31 million in 2021 salary cap space as well pending Watson’s arrival and Barnwell theorizes some of that cleared space could go toward the team re-signing a few of their higher profile soon-to-be unrestricted free agents.

As I wrote on this site less than two full weeks ago, the Steelers acquiring Watson via a trade is plausible from a cap standpoint because his contract isn’t that big of an albatross overall and especially in 2021 as he’s due just $10.54 million in earnings. If Watson were acquired by the Steelers, or any other team, the quarterback’s $10.54 million base salary could instantly be restructured with roughly $9 million of it being turned into a signing bonus to cut his 2021 cap charge in more than half if need be.

So, yes, in theory, it’s very plausible that the Steelers could make a trade for Watson work from a financial and cap standpoint. From there, all that needs to be worked out is trade compensation and showing Roethlisberger the door. Personally, I can’t see the Steelers giving up the kind of compensation that Barnwell believes they would need to give up to acquire Watson in a trade.

Personally, I think we’ll see Watson dealt between now and the first-round of the 2021 NFL Draft. Once again, his contract isn’t that big of an issue and he’s obviously currently one of the best young quarterbacks in the NFL. Several NFL teams will likely inquire about trading for Watson, but I doubt the Steelers will be one of them. In case you’re curious, Barnwell as the Miami Dolphins, Carolina Panthers and the San Francisco 49ers as the three likeliest teams to acquire Watson via a trade. The Steelers are ranked 15th overall on his list when it comes to likelihood.