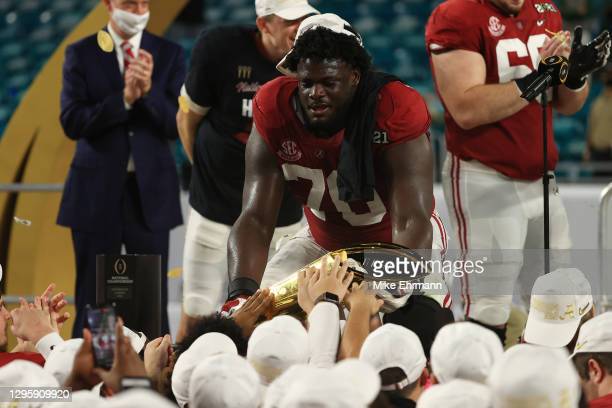 CBS Sports released their latest mock draft on Monday, making a logical selection for the Pittsburgh Steelers at #24. They have the team taking Alabama offensive tackle Alex Leatherwood with their first round pick. Explaining the selection, author Chris Trapasso writes:

“The Steelers are going to have plenty of difficult decisions to make this offseason, and rebuilding the offensive line is a must.”

Short, sweet, to the point. And an accurate assessment of the Steelers’ situation. Their offensive line won’t look the same in 2021 and considering how poorly they run blocked, that’s a good thing. But the Steelers are likely to lose one of their best pass protectors in LT Alejandro Villanueva. With uncertainty for how they’ll fill the position, Leatherwood could become the Day One starter on Ben Roethlisberger’s blindside.

Leatherwood had a decorated career with the Crimson Tide, winning the Outland Trophy while being named a unanimous All-American. A three-year starter, he kicked out to left tackle after playing guard in 2018, replacing Jonah Williams, who would go on to be the Bengals first round pick.

Elsewhere in CBS’ mock draft, Clemson’s Trevor Lawrence predictably goes first overall to the Jacksonville Jaguars. The top three picks are quarterbacks – Justin Fields to the Jets, Zach Wilson to the Texans (in a hypothetical trade that sends Deshaun Watson to Miami). Around the AFC North, the Bengals address their offensive line by selecting Oregon’s Penei Sewell at #5, the Ravens give Lamar Jackson another weapon with Ohio State WR Chris Olave, while the Browns boost their defense with Georgia LB Azeez Ojulari.