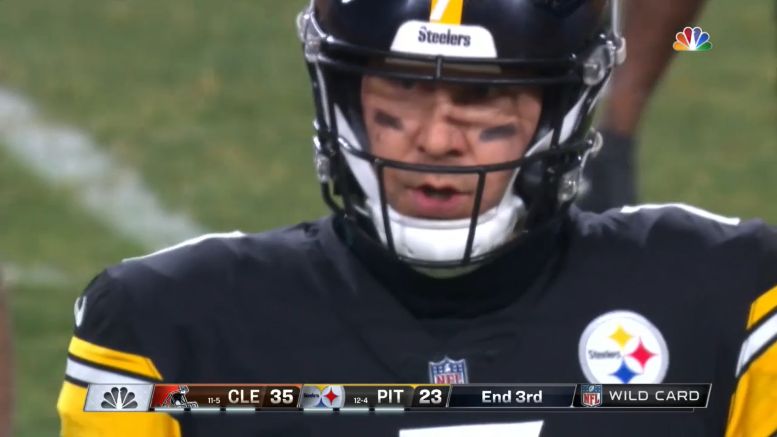 While the Pittsburgh Steelers dug themselves what would ordinarily be received as an insurmountable 28-point hole before the first quarter was even through, a lot of people are taking the final turning point of the game being a decision made by head coach Mike Tomlin on 4th and 1 at their own 46-yard line with 15 minutes left to play.

By that time, the Steelers were on a 23-7 run, climbing back to a 35-23 margin. After Ben Roethlisberger found JuJu Smith-Schuster on 4th and goal from the five for the touchdown, the defense responded with a key three and out that seemed to shift the momentum.

The offense, however, stalled, Smith-Schuster coming up a yard short on a seven-yard reception on 3rd and 8 at the end of the third quarter. Tomlin sent out the punting unit to start the fourth quarter, but used a number of motions in the hopes of drawing the Cleveland Browns offside, ultimately taking a delay of game before punting.

The analytics overwhelmingly favor attempting the conversion, even though the Steelers have been one of the worst teams in the league in short-yardage possession downs. During the regular season, they only converted eight of 16 attempts on 4th down with 1-3 yards to go.

Tomlin said after the game that he wanted to retain the momentum of the field position with his decision to punt, hoping to pin the Browns down deep in their own end. It ended up going for a touchback and they responded with a six-play, 80-yard touchdown drive, making it 42-23 and pretty much the nail in the coffin.

“I mean, that’s Coach’s decision”, Roethlisberger said about the decision to punt the ball in that spot after the game rather than attempt to convert it on offense. “I was prepared to go for it. He said we were punting it. That was the end of the discussion”.

Had the Steelers been able to convert, then obviously things would have been much different. If they failed, which was at worse a 50-50 proposition, they would have given Cleveland great field position and dashed their momentum.

The worst-case scenario ended up playing out anyway, making it ever easier to second-guess Tomlin’s decision, which goes against the analytic logic, and yes, you can certainly make the case that he made a crucially wrong decision here.

It goes without saying, however, that they never should have been in a position where such a decision with 15 minutes to play would be so decisive in the game. But it’s all in the rearview mirror at this point.