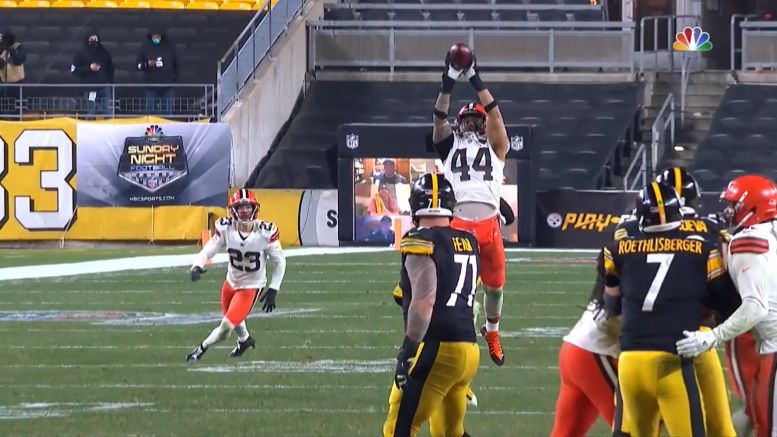 Longevity has a way of accumulating things. Pittsburgh Steelers quarterback Ben Roethlisberger has been in the league for a long time, though with that said, you’re never guaranteed a postseason berth, so playoff accomplishments are still notable no matter how long you have been around, since you have to qualify first.

Last night’s game was the 22nd playoff start in his career, surpassing John Elway to move into fourth place for the most playoff starts by a quarterback in NFL history. A win would have tied him for the third-most postseason wins in NFL history as well. But that didn’t happen.

After throwing four picks against the Cleveland Browns—the most interceptions in a postseason game in Steelers history—he is now tied with Buffalo Bills Hall of Fame quarterback Jim Kelly for the third-most postseason interceptions thrown in NFL history.

He is, of course, in good company, and like all cumulative statistics, they come with longevity. After all, Tom Brady with 35 has the most postseason interceptions in NFL history, five more than Brett Favre, who is second, but he has played in 42 postseason games.

The fact that Roethlisberger has the third-most postseason interceptions isn’t the story here, though, of course. The story is the fact that he threw four interceptions in this past game, and those turnovers were certainly one of the principle deciding factors in the ultimate result.

Naturally, they came in a variety of ways, including a batted pass that resulted in a diving interception by a defensive lineman. The late interception thrown directly to linebacker Sione Takitaki was particularly crushing, given that it sealed any even implausible possibility of a comeback.

Roethlisberger, for the record, only recorded the 44th postseason game in NFL history of a player throwing at least four interceptions, though the only active starter that that list includes other than him is Russell Wilson of the Seattle Seahawks, who won that game. Teams are now 4-40 in such games in postseason history when their starting quarterback throws four or more interceptions.