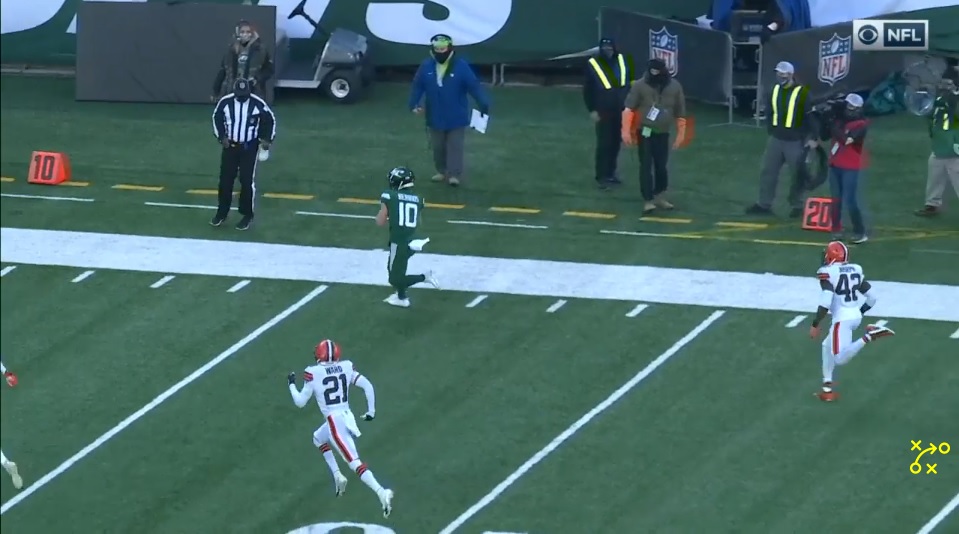 The Jets have one receiver split wide to the left and to the right a three man bunch set tight to the end of the line.  There is a player in the backfield behind the quarterback who is under center. Cleveland in in there nickel defense with 5 defensive backs, 2 linebackers and 4 defensive linemen.

Wide receiver Jameson Crowder (82) is split left with Denzel Ward (21) across from him.  The bunch to the right consist of running back Ty Johnson (25) on the inside, tight end Chris Herndon (89) is in the middle and wide receiver Breshad Perriman (19) in on the outside.  Lined up behind the quarterback is wide receiver Braxton Berrios (10).

At the snap, the offensive line along with Herndon will block down to their left and this gets the defensive line and linebackers to mirror them. Quarterback Sam Darnold (14) will open to his left and reverse back to the right making it look like a bootleg where he can pitch it to Berrios.  Johnson will break to his left and take the inside handoff from Darnold and will flip the ball to Crowder who is coming across the field behind the line of scrimmage in what looks like an end around.

Perriman will run a crossing route which takes his defensive back Terrance Mitchell (39) with him and his route will slow Ward who is following the movement of Crowder. Nickel back Kevin Johnson (28) thinks he has the play read well by initially following Johnson but isn’t sure where to go making movements toward Berrios, Darnold and eventually Crowder.

Safety Karl Joseph (42) is also confused first heads toward Berrios but then taking a step toward Crowder before realizing he should have stuck with Berrios whose sweep motion is turning into a wheel route. Crowder lofts a pass to Berrios who due to all the confusion is wide open for a 43 yard score.

Steelers Scenario – Mason Rudolph will be getting the start and what better way to help him than with some trickery. You want the play to look like formations and plays they already run. The inside handoff should go to Chase Claypool or Ray-Ray McCloud because they are the WR’s who usually run the ball. Diontae Johnson has run the end around so he is throwing the ball in this play and we’ve been waiting for wheel to Anthony McFarland so this is as good a chance as any.

New York has three receivers to the left side and one to the right with a running back to the left of the quarterback who is in shotgun.  The Browns are again in nickel personnel playing Man coverage.

To the left the Jets have from inside to outside Herndon, Denzel Mims (11) and Perriman. To the right is Crowder and in the backfield is Johnson. The Jets are going to run crossing routes to get a natural pick in the middle of the field.  Herndon and Perriman are going to run intermediate crosses to the right and Crowder a shallow cross to the left.  The routes will force Ward (covering Crowder) to find his way around two receivers and two defenders.

Mims will run a curl and his route will nearly align right behind the throwing lane to Crowder. Darnold looks like he might be looking at Mims initially so to Mitchell who is covering Mims and the safety Andrew Sendejo (23) the pass looks like it is going to Mims which will slow their reaction going after Crowder. These routes along with the flat route by Johnson clears a lane for Crowder to take a 4 yard pass and make it a 25 yard gain.

Steelers Scenario – I highlighted a similar play from the Rams last year and would love to see the Steelers use this.  Get big bodies to run the dual crossers so use Eric Ebron and Claypool and run Johnson underneath them and let him create after the catch.

The Jets have one receiver to the left and three to the right with a running back to the left of the quarterback who is in shotgun. Cleveland is again is in their Dime personnel with 6 defensive backs, 3 defensive linemen and two linebackers and they are again in Man coverage.

Once again the Jets are going to use the Browns Man coverage against them.  To the left Mims will run a whip route and be the safety valve.  To the right they have Crowder on the inside, Herndon in the middle and Perriman to the outside.

Perriman is going to run a post route that will take the corner Mitchell with him.  Herndon is going to run a curl route which is actually a pick/rub route.  He will set up his curl to block out Kevin Johnson (28) who is covering him and Joseph who is covering Crowder. Crowder already has an advantage being covered by a safety but add the pick to his out and up route and you a have a nice design that results in a touchdown.

Steelers Scenario – Johnson should be on the whip route to the left giving him the one on one option. You can have Ebron run the curl/pick route, have Claypool run the post route and use JuJu Smith-Schuster on the out and up.