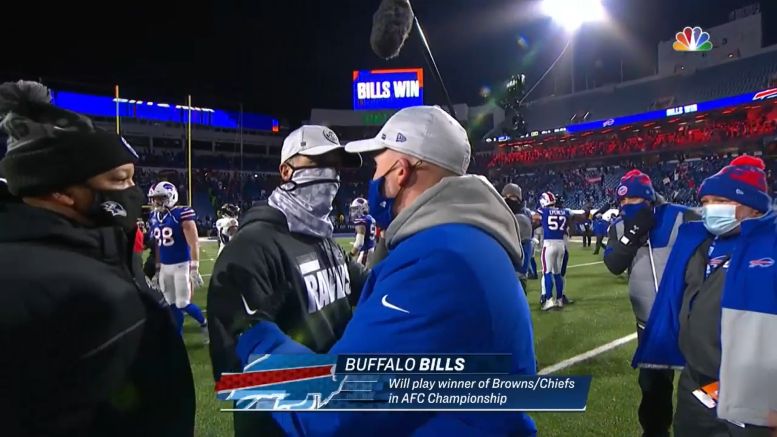 The AFC North may have sent three teams into the Wildcard Round, with one eliminating another, but so far, the division is 0-for-1 in the Divisional Round, and things aren’t looking too good, as the Cleveland Browns have the Kansas City Chiefs to contend with.

While the Baltimore Ravens and Lamar Jackson may have gotten the proverbial monkey off their back last week, securing their first playoff win of the Jackson era, they will have gone no further than last year, as they blew it last night against the Buffalo Bills. While they held the home team to just 17 points, they only scored three themselves.

The fateful play came in the third quarter when Jackson, trailing 10-3 at the time, marched the Ravens’ offense down the field, looking for his Pro Bowl tight end, Mark Andrews, in the end zone, only to find cornerback Taron Johnson, instead, who took it the other way for 101 yards and the score.

So instead of driving for the  game-tying score, he chose the worst possible time for his first career red-zone interception, producing a 14-point swing. Neither team would score for the remainder of the game, but the Bills didn’t need to as they march on to the AFC Conference Finals for the first time since the early 1990s.

Perhaps things might have gone slightly differently had Jackson not suffered a concussion late in the game, though, trailing by two touchdowns, and with his history of struggling when playing from behind, the odds are that the end result wouldn’t have changed.

The long and short of it is that the Ravens are now 1-3 in the postseason over the past three seasons, though at the same time, that also means that they have reached the postseason three years in a row. The Pittsburgh Steelers, in contrast, are 0-1 in that same span, their loss coming to the Browns.

Baltimore entered this season as two-time defending AFC North champions, but even though they would finish the year 11-5, they would finish second to Pittsburgh, with Cleveland also advancing as two of the three wildcard seeds.

Following a three-game losing streak in the middle of the season, which culminated in a loss to the Steelers in a game in which they were without more than half a dozen starters due to Covid-19, the Ravens went on a five-game winning streak to end the regular season.

Then they overcame their first double-digit loss in the Jackson era last week in coming back to beat the Tennessee Titans, 20-13, to whom they lost last season. So that’s progress, I suppose, but clearly, there is still more work to be done.