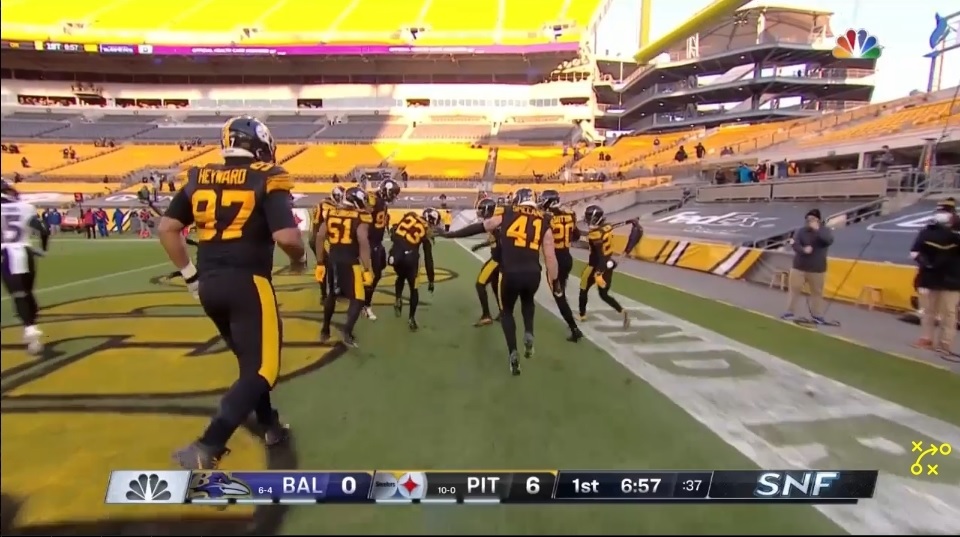 1. That Was … – A win. First and foremost that is most important. Playing the Ravens is never an easy game and I didn’t expect one tonight. Could it have been easier if the Steelers played well? Absolutely, but I am going to give them the benefit of the doubt after the numerous schedule changes and all the other issues we are all having during this pandemic. They are up three games in the division and that is step one winning the division.  It was ugly but it’s another win.

2. They Were … – Unable to hold onto the ball. I think I counted 6 dropped passes with Diontae Johnson at the top of the list with three. I’ve brought him up before and he really needs to improve on his concentration during the catch and protecting the ball after the catch. Chase Claypool had the first drop on a deep ball he has to catch with his hands and not let it get to his body.  Eric Ebron was the only one catching it early and he had a key drop in the red zone too.  I hope they got rid of all their drops. We don’t want to see them going forward.

3. What was… – Going on with the play calling and execution in first and goal situations? The first time they tried to run outside of Ebron who can’t block. Then they threw consecutive two yard passes to Ebron and followed that up with spreading out 22 personnel (which I like) but then trying to throw it to the side with Ebron and Claypool where the Ravens had extra coverage instead of hitting the wide open fullback over the middle.  Nobody covers the Steelers fullback because he’s never used on passes.

4. I Had … – A feeling Ray-Ray McCloud had a mistake coming in the return game. And before you spout off about how good he has been, I agree and I am a fan of what he has been able to do so far. The last few weeks his decision making hasn’t been his best.  Early in the season he was getting north and south and now it’s more lateral and blocking has a lot to do with it.  But reversing your field and running backwards while doing so are bad desicions.  He has also had some other punts that he should have fair caught that he got away with.  Trying to return a punt with a guy in your face is a bad decision. And on the last kickoff he should catch it, get forwards and then get down when he has no blocking.

5. I Never Thought … – That the Steelers would have a game where the running back combo of Benny Snell and Anthony McFarland would average more yards per catch than all of the other receivers. Snell had 3 catches for 33 yards and McFarland had one for 17.  I really liked the use of the RB’s in the passing game and would like to see more.  Keeping a running back in the backfield will help the short passing game by not letting the defense continually drop 7 or 8 guys into coverage.

6. I Hope … – The early reports are wrong and Bud Dupree isn’t severely injured. That would be a huge blow to the pass rush for the Steelers. Neither Alex Highsmith nor Ola Adeniyi has been able to get a solid amount of pressures in their limited opportunities.  Dupree has made an impressive ascension the last two years and has made himself a huge part of this defense.  He is a difference maker against the run and pass and they will need him down the stretch.

7. I’m Not Sure … – How I feel about the lack of holding calls in the NFL this year. There clearly has been an effort by the NFL to limit the number they call this year.  It makes the game move along faster with less laundry on the field but I’m sure the players know they aren’t being called for holding as much so wouldn’t that entice them to hold more? Doesn’t that put more pressure on the referees to only throw them at certain times? And I’m not going to take about the “roughing” the passer calls again.

8. I Can Not … Tell a lie. I love me some James Washington. His two receptions came late in the game when they needed it most. First on a shallow cross where Ben Roethlisberger through a dart to him and secondly on that floater that made me stop breathing before, during and for some time after the catch. He probably should have caught the back shoulder throw as well in the end zone but that was a tough catch.  I wish he was more involved in the offense but it’s a deep WR group.

9. The Next … – Man up philosophy was put to the test again and at first look they seemed to do okay. C. Hassenauer got his first start and despite missing a blitz early in the game seemed to do alright.  Chris Wormley and Henry Mondeaux were part of the group to replace Stephon Tuitt and they combined for 4 tackles.  Snell had 19 touches for 93 yards and flattened a defensive back on a big run late in the game. He gets stronger as the game goes on so he may not be the best fit in this pass heavy offense but the dude runs hard and I love that.

10. I Am Guilty … – Of not appreciating Joe Haden enough. He got his 10th interception as a Steeler in this game and he was a big step in filling a hole in the defense that was there for a long while. Remember the likes of Artie Burns, Coty Sensabaugh, Russ Cockrell and Antwon Blake. And then adding Steven Nelson gave the Steeler two quality starting corners. Their coverage ability helps the pass rush and allows them to move the safeties around more.  Huge part of the defense.