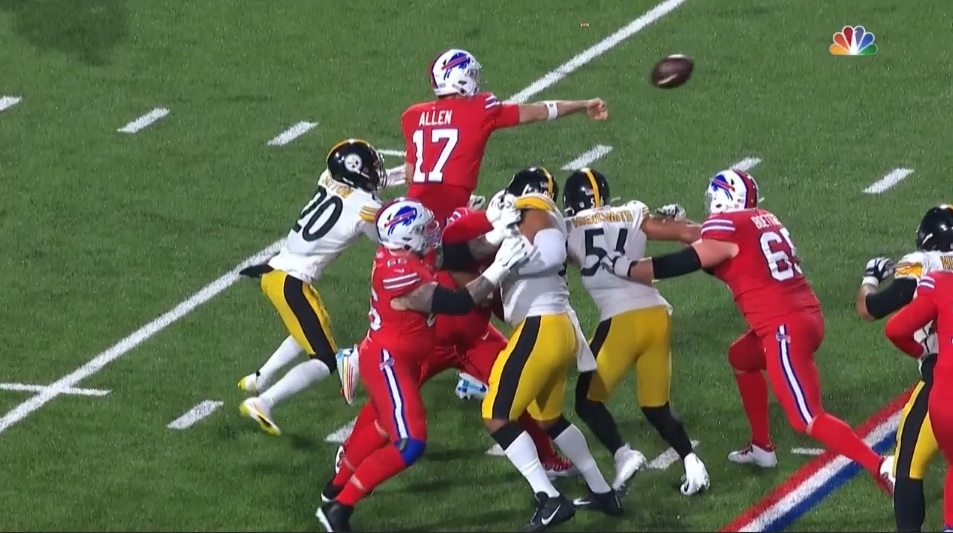 1. Are We Blaming the Wrong Guy? – Many of us including myself are very critical of the offense, Randy Fichtner and the play calling.  It has become very predictable and if we as fans can see it you know defensive coordinators can too. I hadn’t really thought of it this way but what if the play calls are not a result of the play caller but of what the quarterback can do.  Could Fichtner be hamstrung in what he can call?  Ben Roethlisberger’s mobility is nearing zero.  He barely moves in the pocket anymore and doesn’t step into his throws.  It seems he doesn’t like to play under center or use play action.  Even no huddle seems to be used less than in the past and its more of a take your time vibe than speeding up to put pressure on the defense. He is older and maybe he doesn’t want to stand back there and get hit so he prefers the short passing game so he can get it out and preserve his body.

2. The Dilemma of Diontae – No matter what your sport is if you get a case of the yips is does a number on your head. Eight drops in three weeks is hard to do with how sticky those gloves are that the receivers use. I give Mike Tomlin credit in sitting him down for the rest of the first half.  Johnson was hurting the team and must be held accountable.  I also give credit to Johnson for coming back in the game in the second half and making some plays. Hopefully this was a teaching moment and the lesson was learned.

3. Good Half/Bad Half – The coverage by the Steelers defensive backs in the first half was pretty darn good. Buffalo had only 68 passing yards in the first half, the coverage was tight and defenders were breaking up passes.  Other than the lack of physicality in their tackling where they would just hug a receiver until the whistle blew they played very well.  The second half was the complete opposite. Stephon Diggs ran free in the second half and racked up big numbers. Others were open, the throws were easy and that resulted Allen having and easy second half with minimal incompletions. Give credit to Brian Daboll for making adjustments at half time.

4. You Hesitated – Injuries have depleted the linebacking corps leading to Avery Williamson and converted safety Marcus Allen getting the start. They combined for nearly 20 tackles and given the circumstances you have to give them some credit. Each of them at one point was asked to blitz. Each of them had a big hole to run though. Each of them started through the hole and then hesitated for some reason. What could have become sacks did not because they hesitated. I wonder what they were thinking.

5. Hot Hand Haters – Stop me if you’ve heard this before but the run game was for the most part ineffective. A revolving door of offensive lineman had something to do with that but there was a small positive.  Benny Snell ran the ball 3 times for 14 yards.  Earth shattering no but we have to take what we can get at this point. His third carry came at with 12:41 left in the second quarter.  He was never seen again. The Steelers were up seven then.  Where was he? I can sort of understand the Jaylen Samuels usage when you want to throw the ball later in the game but come on.

6. Kick Coverage Can’t Continue – Earlier in the season I gave some praise to the kick coverage team that had showed a lot of improvement over previous year but they’ve taken a turn downward the few games. Of the last seven kicks returned six have been between 26 and 35 yards. I’m not sure why the returns have been better but you get the feeling someone is going to break one.

7. Sutton Shines and Slips – Like a lot of others in this game Cam Sutton had his ups and downs. He has played well this year and may be the Steelers most aggressive defensive back when it comes to attacking the ball in the air.  He was credited with three pass breakups in this game; he made a nice play on his interception and brought pressure on a blitz.  In the second half there was at least one missed tackled and he got manhandled by Diggs. He wasn’t the only one and Diggs is hard to cover and I expect the missed tackles report to be high. Still has a good future just very up and down in this game.

8. Physicality Faltering – Other than the defensive pass rush and JuJu Smith-Schuster the whole team lacks physicality. There is no mean streak in the offensive line. There is usually at least one guy with an attitude.  The running backs don’t run behind their pads. The wide receivers are more likely to fall down than to run through a guy like JuJu. Remember that stiff arm by Vance McDonald a hundred years ago? There is none of that in the tight ends.  The inside linebackers are sliding off guys. The defensive backs and safeties don’t strike fear in anybody.  Where is the anger? Where is the moxie? Where is the not here, not now tenacity?

9. The Challenge of Challenging – Tomlin’s track record is not good we all know that but if the announcers think it was a fumble, the players thought it was a fumble and the fans thought it was a fumble then why wouldn’t you challenge if it was a fumble? We all make mistakes even the referees. I won’t get into yet another “roughing” the passer call but this team is distressed right now. It was the first half and worst case scenario is you burn at timeout. They need to capitalize on any opportunity now and they may have missed one.

10. Limping to the Finish Line – Injuries are going to happen in the NFL but for the Steelers that snowball is heading downhill at great speeds. It seems to be a gaggle of players being affected weekly.  The offense is terrible and opponents are not threatened.  The defense has lost a pass rusher, inside linebackers and defensive backs for a least a game over the last few weeks.  With three weeks left in the season confidence is waning. The team is frustrated and we as fans are frustrated and there are no foreseeable fixes forthcoming.