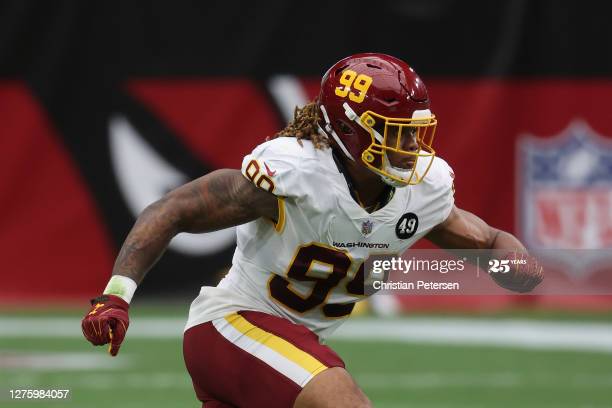 The Pittsburgh Steelers arguably have the NFL’s best defense. But their Monday opponent might have the most underrated. By the way Mike Tomlin talked about Washington Football Team’s defense in his Thursday presser, he’s probably inclined to agree.

We know Tomlin makes every team sound like the ’27 Yankees but he had nothing but good things to say about the job head coach Ron Rivera and DC Jack Del Rio have done in Washington this season.

“They got a bunch of high round draft picks and talented young ones that provide a wave that others ride,” Tomlin told reporters. “I can’t say enough about the edge pressure presence with the talented edge rushers. Chase Young being a top draft pick from this past draft. They got quality Alabama guys on the interior that really wreak havoc and are really interchangeable. They got quality depth. I can’t say enough about the development of a guy like Tim Settle who’s a third interior rusher who’s providing pressures and sacks for them as well.”

Few teams have the level of pedigree up front like Washington has. First round picks across the board; Chase Young, Jonathan Allen, Da’Ron Payne, Montez Sweat, and veteran Ryan Kerrigan. Three of those guys taken in the top 15, all four selected in the top 20. That talent is translating too. Sweat leads the team in sacks with Kerrigan right behind. Young is the favorite for DPOY and coming on strong in recent weeks, recording a sack and two TFL in their Thanksgiving blowout win over Dallas. And Settle, about the only non-pedigree guy up front as a former 5th round pick, has five sacks on the year.

Only trailing Pittsburgh, Washington is second in the NFL with 36 sacks. That type of pressure is providing chances for guys to make plays in the secondary.

“They’re opportunistic on the back end much like defenses that Coach Rivera and Coach Del Rio have been apart in the past. They’re fundamentalist in nature. They do a great job of mixing zones and mans and they have the turnover production to boot. But that turnover production is driven by the pressure that they apply to the quarterback. No doubt. I think they have 36 sacks or so through 11 ball games. And you feel that that consistent pressure when you watch the tape.”

Their ten interceptions is top ten in football. CB Kendall Fuller leads the way with four but six different players have picked off at least one pass. Their safeties support the run hard, they don’t make many mistakes, and the Steelers will have to play much better against them than they did versus Baltimore if they want to walk away with a win.

“When you watch the tape, they’re solid against the run. They’re gap sound, again another signature of Coach Rivera and Coach Del Rio defenses. They’re fundamentalists in what they do. They’re thoughtful, they’re small menu, they’re big understanding. They play extremely fast.”

All that adds up to not allowing many points. Washington ranks 7th in that category, a far cry from the 27th ranked place they found themselves in a year ago under the old regime. More proof that coaching matters.