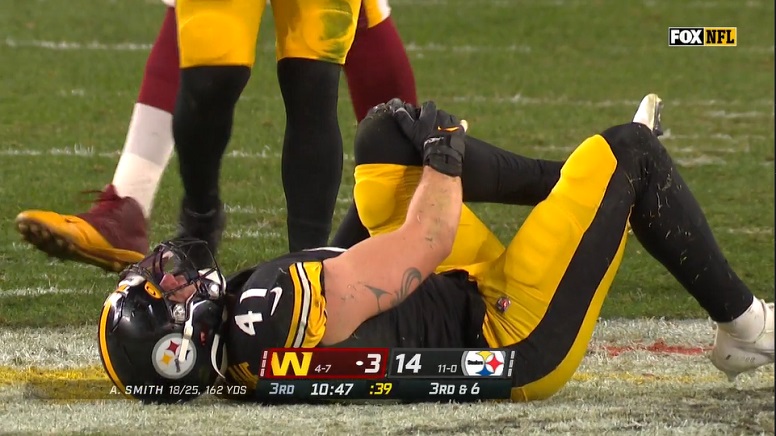 Will the Pittsburgh Steelers have inside linebacker Robert Spillane back from his knee injury in time for the team’s first playoff game? It’s hard to say for sure judging by the response Steelers head coach Mike Tomlin gave on Tuesday during his weekly press conference when asked about Spillane and if the inside linebacker will resume practicing this week and ultimately play in the team’s Sunday regular season finale against the Cleveland Browns.

“You know, we’ll see,” Tomlin said. “I hadn’t had a chance to talk to John Norwig, our head athletic trainer. I know that he’s down the hall working as we speak and so we’ll get some clarity there. Make no mistake, we’re looking forward to getting him back and when we do, it’ll be appropriately so, and he’ll be capable of putting his hand in the pile and helping us with our efforts.”

In short, it sounds like Spillane’s continuing with his rehab, but it’s not guaranteed that he’ll be back practicing this week. If Spillane is to return to action on Sunday against the Browns, he’ll obviously need to practice on Wednesday, Thursday, and Friday. To do so, the Steelers will need to announce on Wednesday that his 21-day practice window as a possible designated-to-return player has been opened.

If it’s not announced on Wednesday that Spillane is resuming practicing, perhaps he will do so next week when the Steelers begin preparations to play their first playoff game. Currently, the Steelers inside linebacker depth chart on their 53-man roster includes Vince Williams, Avery Williamson, Tegray Scales and Marcus Allen, who missed the team’s Week 16 with a neck injury.

Spillane was placed on the Steelers Reserve/Injured list with a knee injury on December 12. He sustained that injury during the team’s Week 13 home game against the Washington Football Team.
For the season, Spillane has registered 43 total tackles, two sacks, four tackles for losses, three quarterback hits, one interception, four passes defensed and a fumble recovery. He was the Steelers defensive signal-caller before going down injured.