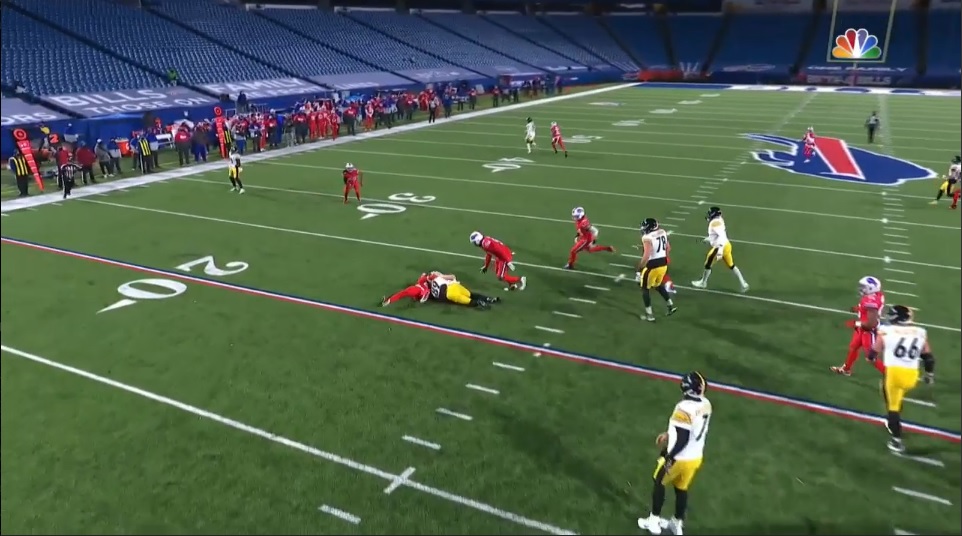 Three games into the year, I complained about the Pittsburgh Steelers’ running back/tight end screen game.

I’m the grinch griping about how bad it’s still been. There have been marginal improvements from the first three weeks but man, it’s still been ugly.

I went through the miserable experience of combing through all targets to running backs and tight ends this year to see how many of those were screens and how (un)successful they were. Receivers are a different story. Pittsburgh’s actually a solid WR screen team, smoke and bubble screens to playmakers in space without linemen needing to get in the way.

But RBs and TEs? Pulling teeth.

Let me get to the results. For the season, here are the results of their RB/TE screens.

The completion percentage isn’t bad, you would expect that number to be high on screen plays, but everything post-catch is a mess. 3.6 yards per attempt is 0.1 yards worse than the Steelers’ yards per carry on run plays. And you know how bad those have been. Their yards per reception is still a meager 4.6.

As you can expect from those boring numbers, there aren’t many big plays here. Here’s the range of yards gained on those 17 completions.

To be fair, I don’t have a comparison for the rest of the league. Such context is key when evaluating these types of numbers. But considering it feels like every week, some team is hitting a big 40+ yard gain off it, the Steelers have to be among the worst in the league. And have been for some time. It’s a wonder why these plays even remain in the playbook, much less are called on gameday. Though given they’re averaging less than two of these a game, despite throwing 40+ times with regularity, maybe they’re catching on.

Why the team struggles so much with these screens is another question I wish I had an answer to. Maybe it’s a lack of practice time. Maybe it’s a lack of reps with Ben Roethlisberger, where the timing and selling of these screens are important. Maybe it’s an offensive line not selling pass well enough – we identified those issues in the above linked article. Pittsburgh has seemed to slightly change their approach, letting their OTs pass set to try and influence edge rushers upfield instead of releasing as blockers but it isn’t making that much of a difference. And Pittsburgh lacks an explosive back to use on these plays. Anthony McFarland is an option but he’s struggling to get a helmet on gameday.

That last point is why I’m expecting Pittsburgh to draft a capable, receiving back in this upcoming draft. They’re not hard to find in today’s pass-happy college system. This team has reaped the benefits of playmakers at receiver. They need to find the same out of the backfield.