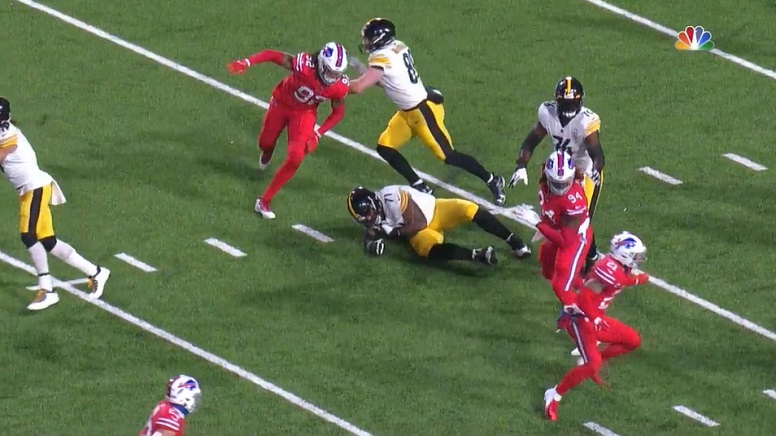 In their Week 14 Sunday Night Football matchup with the Buffalo Bills, it was reasonable to expect a physical battle typical of December football between two teams primed for the playoffs.  And a physical game it was, which meant more injuries sustained.  This time, the Pittsburgh Steelers lost not one, but two offensive linemen, both Guards Matt Feiler and rookie Kevin Dotson, who filled in for Feiler after his exit early in the game.

Feiler got tangled up with Bills linebacker A. J. Klein on a 2nd and 7 with 8:41 left in the 1st quarter and his right arm was briefly on traction.  He got up immediately after the play, swinging his right arm in a circle and showing decent range of motion.  He stayed on the field for the 3rd down, helping to give Ben Roethlisberger time to move in the pocket and get his pass off.  Unfortunately, the pass was deflected and the Steelers punting team came on the field.  By the next offensive series, Dotson was the next man up and Feiler did not return to the game.

Dotson’s injury isn’t as clear.  The last time he played in this game was the Steelers first offensive series of the second half, beginning with 10:01 left in the 3rd quarter.  On the first play, James Conner rushed for only a yard but was able to cut and escape getting tackled behind the line of scrimmage due to a block by Dotson, who popped right up after the play.  On 2nd down and 9, an incomplete pass, Dotson got caught behind Alejandro Villanueva and didn’t have a lot of contact with the defender.  On 3rd down, Roethlisberger was sacked.  Dotson stayed on his block and was actually the only player to try to run down Bills DE Jerry Hughes, who scooped up the ball and ran into the endzone – which didn’t result in a score since Roethlisberger was ruled down when the ball came out.

There was no sign that Dotson sustained an injury during this set of downs.  Dotson never seemed to pay any particular attention to either arm during this series or seem limited in any way and I didn’t see any unusual traction on either arm during those plays.  The next time the Steelers offense took the field, J.C. Hassenauer had taken over at the left guard position and Dotson was ruled out for the rest of the game.

Following the game, Head Coach Mike Tomlin described it as a pec injury but didn’t have any details on the severity of injury for either player.  Then again, Tomlin probably had more on his mind at the moment, like how to get his team back on track after an ugly loss.

It would be a huge blow for the team to potentially lose 2 offensive linemen in one night.  They will both undergo MRI, most likely tomorrow morning, and we will hopefully know more about whether both Feiler and Dotson will be able to work their way back to the team when we hear from Tomlin on Tuesday.

We have seen pectoralis injuries that are season ending for many players, including Steelers defensive linemen Cam Heyward, who sustained this injury in November 2016 and came back better than ever the following year (and just keeps balling out), and Stephon Tuitt, who was having his best season ever in 2019 until his pectoralis injury required season-ending surgery and has also come back roaring.

So what is a pec injury?  And what makes the difference between returning or needing season-ending surgery? 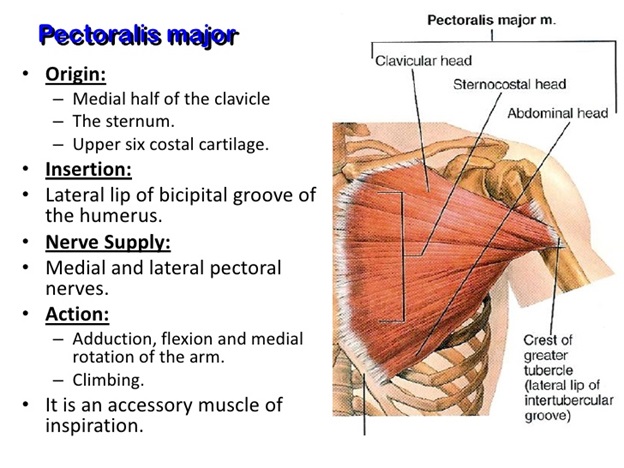 In other sports, such as football, the tendon can tear when there is extreme force on the arm while it is in an abducted, extended, and externally rotated position or with severe traction on the arm.  This was clearly the case with Feiler’s injury, whose right arm was on traction as he gets tangled up with the linebacker (#54).  When he gets up, he clearly knows something’s different and immediately starts checking his right arm range of motion:

There was no obvious injury for Dotson that I could see in any of the downs he played from the 1st Q when he took over for Feiler until the 3rd Q when he was ruled out.

In the NFL, pectoralis muscle injuries weren’t that common in the past, although they seem to be increasing.  In a review of the NFL databank from 2000 to 2010 published in The Physician and Sports Medicine, only 10 injuries were found, 5 in defensive players while making tackles.  8 ruptures were treated operatively, and 2 cases did not report the method of definitive treatment. The average days lost was 111 days (range, 42-189). The incidence was 0.004 pectoralis major ruptures during the 11-year study period. 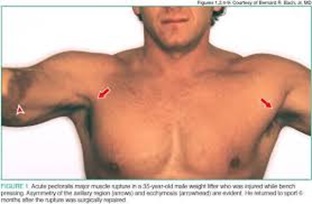 An MRI is used to confirm the diagnosis and assess the extent of the muscle damage.

So what about return to play if no surgery is needed?  We have an example from this year.  In the season opener against the New York Giants, Right Guard Stefen Wisniewski was filling in for an injured David DeCastro and sustained a pec injury.  He was placed on injured reserve but was cleared to return to practive on October 14, exactly 4 weeks after his injury.  He was activated prior to the 21 day deadline but was released 3 days later and then signed by the Kansas City Chiefs.

The general consensus at the time was that Wiz had recovered well but that the Steelers let him go because the team had confidence in Dotson as a backup.  Given the recent turn of events, the team needs to hope that they will get at least one of their guards back quickly.

Fortunately, I think there is good reason to hope that neither player will miss significant playing time.  Feiler actually stayed on the field for the following play, only heading to the locker room after the Steelers failed to convert on 3rd down.  He didn’t seem to be in terrible pain after the injury and appeared to be moving his arm reasonably well based on the limited video available.  Dotson showed no limitations at any point, a sign that his injury may not be serious.  Between the two, I would give Dotson a better chance to be back for the Bengals next Monday night.  Let’s keep our fingers crossed.