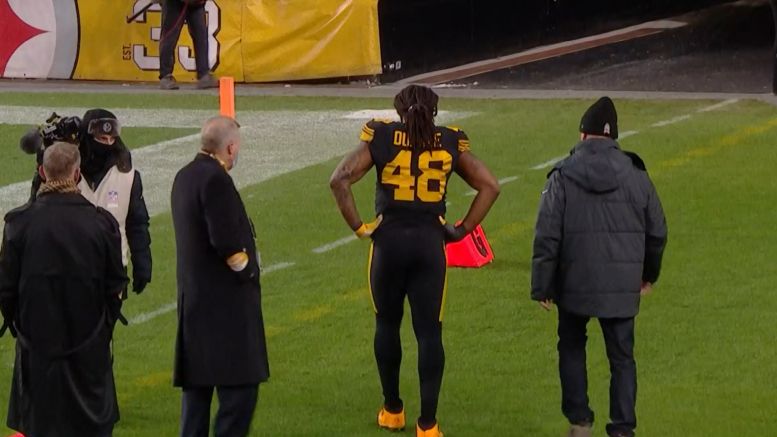 There was a sense of gloom within the Pittsburgh Steelers after second-year inside linebacker Devin Bush suffered a torn ACL in the middle of the year and was lost for the remainder of the season. As a former top-10 pick, he was destined to be a staple of the franchise for some time to come, and one of their most important pieces.

While not intending to diminish his impact and what he is able to bring to the table from the inside linebacker position—he certainly presents a completely different level of speed that the Steelers otherwise lack—they have, all the same, gone 6-0 so far since he was injured.

Now with veteran outside linebacker Bud Dupree also going down with a torn ACL, his teammates are processing his absence. They understand what this means both for them as a team, for him personally, and between them as friends when one is going through something, with T.J. Watt calling it “very deflating”.

“It’s just so much going on. When you hear something like that happens, it’s like holy cow his season could potentially be over, he’s in a contract year”, he told reporters before the game. “He’s such a phenomenal player, a key player for what we do and what makes us who we are as a defense”.

But he also recognizes that, in a certain sense, they have already gone through something like this, and have gotten through it. They might have to get more creative, variable, and adaptable in order to compensate, but they can continue to be successful.

“You have to know it’s the next man up mentality”, Watt added. “You have guys like Alex Highsmith who is preparing like he has been a starter this whole time. We have to trust that the coaches are going to put him in the best position, us in the best position, to keep going forward. I have all of the confidence in the world in the guys in this locker room that we are going to be all right”.

It also helps that the rest of the Steelers’ front four, including Watt, is fantastic. Even just himself, Cameron, Heyward, and Stephon Tuitt could rival for the best defensive front in the NFL, and it’s no coincidence that they have a comfortable lead for the most sacks in the league.

And now, as they have in the past, they can use Dupree’s injury as motivation, to play for him and to win for him, especially if this is to be his last season in Pittsburgh before he hits a big payday in free agency, which is likely.