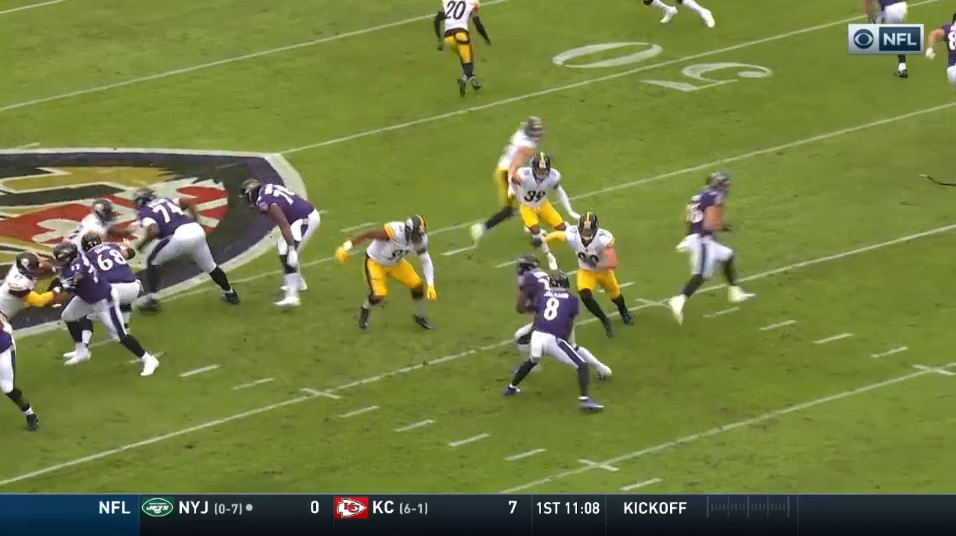 Keith Butler and the Pittsburgh Steelers employ a gameplan against the Baltimore Ravens they don’t use against any other offense. Of course, few teams run an offense like Baltimore’s. A run-centric mindset in a pass-happy world, filled with great athletes at quarterback and running back.

For the last two games, Week 17 of 2019 and Week 8 this year, the Steelers’ defense have used a “mesh charge” on the QB. Robert Griffin III last year, Lamar Jackson this season. A method of attacking the QB at every mesh point so the player can’t be “read” like a traditional zone/read scheme. It forces the QB to hand the ball off to the back. The theory being, especially when facing Jackson, taking him away as a running threat altogether. It also reduces the threats of playaction and rollouts. If someone is going to beat you, let it be a less talented back, not the reigning MVP.

Watch LOLB TJ Watt go straight after Jackson, even though the ball has been handed off to the back.

Steelers "mesh charge" vs the Ravens was one reason why run defense struggled. Only playing with ten once the QB gives.

Not on this rep though. Charge makes the CB fit in the run game much more important. Joe Haden plays the run with as much effort as any CB in football. pic.twitter.com/MOVWcOVO7N

To be fair, it’s been mostly effective. In 2019, RG3 had just 15 yards rushing. In 2020’s first meeting, Jackson had just 65 yards and barely more than four yards a carry. Most of that coming on scrambles, not designed runs.

Pittsburgh won those battles but lost the war. Their run defense was gashed in both games. 223 yards allowed in Week 17, a whopping 265 given up in Week 8. Blame some of that on mitigating factors. Last year, the Steelers knew their season was over and played like it. This year, they lost NT Tyson Alualu six plays in and struggled to adjust. Still, bad run defense is bad run defense and the normally stout Steelers have looked weak with this gameplan.

The issue with mesh charge is that it takes a run defender away. And a good one. Normally, either Bud Dupree or TJ Watt are the ones “mesh charging” the QB. When the QB hands the ball off, Dupree/Watt aren’t part of the run fit. The defense has just lost one of its best run stuffers.

It changes the force player, no longer one of your EDGE guys, and it reduces the number of players you have by one. If you came into the play with a +1 box count, say, eight defenders against seven blockers, by mesh charging, you’re now even. Seven vs seven. If you came into the play even, you’re now -1, short a man and a gap. You’re now forcing someone to win their 1v1 matchup and track down one of the Ravens’ talented backs. Sometimes, the defense wins. But if they lose even 25% of the time, the back is into the second level with a lot of space.

There’s pros and cons to every defense. If the perfect scheme existed, everyone would run it, and Jackson wouldn’t have been league MVP. Don’t run the mesh charge and the QB becomes a bigger threat. Your EMOL – Watt and Dupree – are now being read and putting them in difficult situations where they can’t be their typical, attacking selves. But with Jackson out of the lineup and RG3 less of a threat with his legs, get back to basics and play a more traditional game. It can’t produce worse overall results than the last two matchups. Right?