The Pittsburgh Steelers have now released their second official injury report of Week 17 ahead of their Sunday road game against the Cleveland Browns and the Thursday offering shows that a few players are moving in the right direction and another one moving in the wrong direction.

Not practicing again for the Steelers on Thursday were safety Terrell Edmunds (shoulder), center Maurkice Pouncey (not injury related), quarterback Ben Roethlisberger (not injury related), and outside linebacker T.J. Watt (not injury related). Of those four players, Edmunds is the only one dealing with an injury as the other three are being rested this week and not expected to play on Sunday against the Browns.

Also sitting out on Thursday was kicker Chris Boswell (groin) after he was listed on Wednesday as being a full participant. It will now be interesting to see if Boswell is able to practice on Friday. If he can’t, the Steelers might need to sign kicker Matthew Wright off their practice to kick against the Browns.

Also practicing fully again on Thursday were outside linebacker Olasunkanmi Adeniyi (shoulder) and safety Marcus Allen (neck). Both Adeniyi and Allen missed the team’s Week 16 game with their respective injuries. 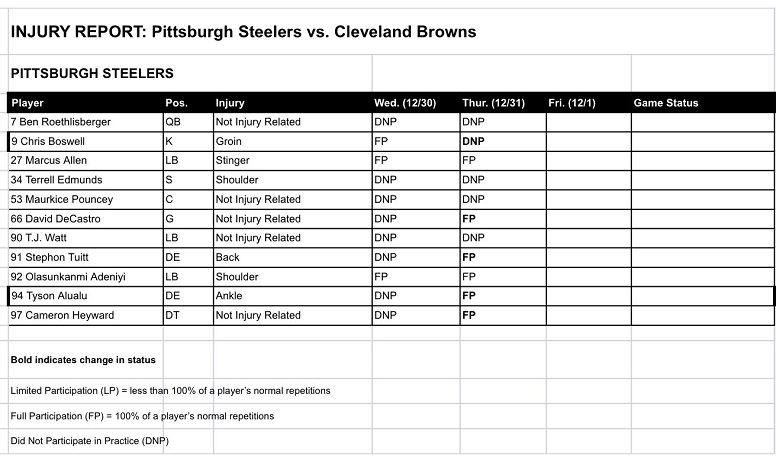