The Pittsburgh Steelers have now released their second official injury report of Week 16 ahead of their Sunday home game against the Indianapolis Colts and the Thursday offering shows that a few players are moving in the right direction.

Also practicing fully on Thursday for the Steelers were running back James Conner (quadricep), guard Kevin Dotson (shoulder), and fullback Derek Watt (concussion). It’s now looking highly probably that all three of those players will be able to play Sunday against the Colts. Conner and Dotson were both sidelined in Week 15 with their respective injuries while watt left the Week 15 game early with a concussion.

Not practicing again for the Steelers on Thursday were outside linebacker Olasunkanmi Adeniyi (shoulder), inside linebacker Marcus Allen (neck), inside linebacker Ulysees Gilbert (ankle), and defensive end Stephon Tuitt (back). It will now be interesting to see how many of those four players will be able to practice in some capacity on Friday. There’s a good chance that one of them or more will ultimately be sidelined on Sunday and hopefully Tuitt is not one of the.

In more concerning news related to the Steelers Thursday injury report, kicker Chris Boswell was added to it after being limited in practice with a groin injury. If Boswell is not able to kick on Sunday, practice squad kicker Mathew Wright would likely be the one to handler those duties. He would need to be elevated on Saturday to do so. 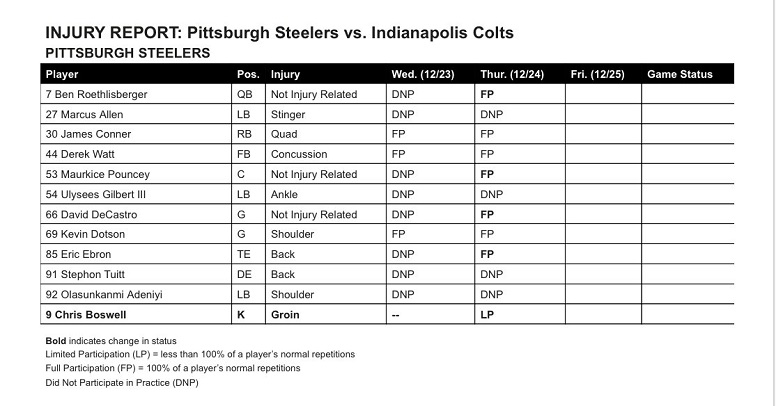