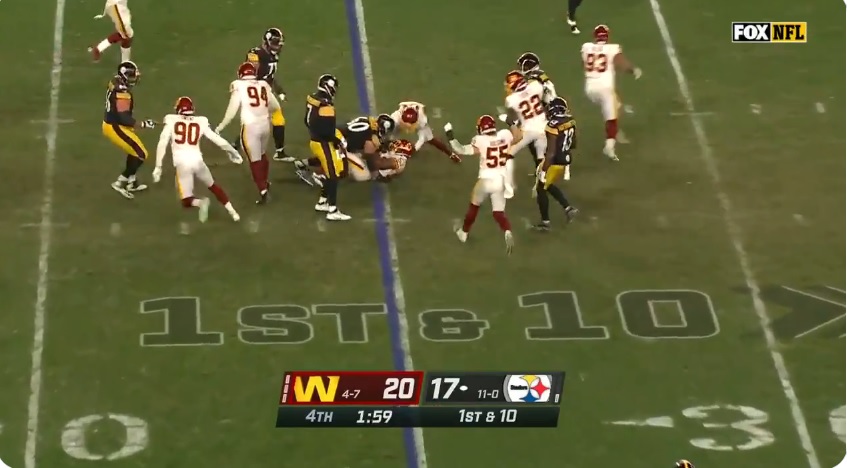 The Pittsburgh Steelers were unable to pull away from a tough Washington Football Team, and lose their first game of the season, 23-17.

In a game that featured two of the league’s top defenses, both were up to the challenge early in this game. Neither team’s offense could capture a rhythm, as both the Steelers and Washington Football team punted three times each in the first quarter.

Finally, near the end of the first quarter, the Steelers offense would finally come alive. A couple of big plays from Ben Roethlisberger to Eric Ebron would get them near midfield. Then, Big Ben would hit Diontae Johnson for a big 17 yard gain, putting them in Washington territory. The 14 play, 72 yard drive would conclude in a three yard touchdown from Roethlisberger to Johnson to put them ahead 7-0 with 10 minutes left in the second quarter.

On Washington’s next drive, they would be stopped on fourth down and one, as Steelers corner Mike Hilton would make the play in the backfield to give the ball to the Steelers.

Unfortunately, the Steelers next drive would stall out on a missed fourth down conversion as well. The Steelers had a fourth and goal from the one yard line, and Benny Snell was stuffed by Rookie of the Year candidate Chase Young.

After the Steelers defense forced a quick three and out, the Steelers offense would take over at midfield with just four minutes left till halftime. On the first play of the drive, Roethlisberger found James Washington for a 50 yard touchdown to extend their lead, 14-0 with a few minutes left in the second quarter.

After both teams exchanged punts on each of their next possessions, Washington would take over at their 41 yard line with less than a minute left in the half. Quarterback Alex Smith would find Cam Sims for a big gain, to get them in field goal range. After two consecutive sacks by TJ Watt and Stephon Tuitt, Washington would settle for a 49 yard Dustin Hopkins field goal to cut the Steelers lead to 14-3 at the half.

The Washington Football team would carry that momentum in the second half, going on a 14 play drive of their own, 82 yards covering six minutes of clock. Smith would find Cam Sims and Steven Sims Jr. for timely first downs, and the drive would be capped off by a Peyton Barber one yard touchdown. It would cut the Steelers lead to 14-10 with just over eight minutes left in the third quarter.

The Steelers next offensive drive was stalled by a fumble between the center and Big Ben, leading to a punt. Washington’s next possession would end in a punt as well, giving the Steelers the ball a few minutes before the end of the third quarter.

Another Big Ben to Diontae Johnson connection helped jumpstart the Steelers ensuing drive, this time for a gain of 16 yards. A defensive pass interference call on the Washington Football team moved the Steelers near the redzone. Their drive would stall at Washington’s 19 yard line, and they would settle for a field goal at the beginning of the fourth quarter. Kicker Matthew Wright, filling in for Chris Boswell, would convert on a 37 yard field goal, extending their lead to 17-10.

Washington’s offense finally gained traction and found some success on the Steelers defense, much like they did early in the third quarter. J.D. McKissic would pick up big gains of 15 and eight to put them near the goal line. Alex Smith would find tight end Logan Thomas for a 15 yard touchdown to tie the game up at 17 with nine minutes left in the fourth quarter.

A good kickoff return by Ray Ray McCloud put the Steelers offense in good field position to begin their next possession. Big Ben would find JuJu Smith-Schuster for a few small chunk gains. However, after moving the ball into Washington’s territory, the Steelers drive would stall again, and for the second time in the game, were stopped on fourth down with four minutes to play.

Washington would take advantage, as J.D. McKissic would pick up back to back chunk gains. On a crucial third and four, Alex Smith finds Cam Sims for a 29 yard gain to put the Washington Football team at the Steelers 27 yard line. However, the Steelers defense would force a field goal, and Hopkins would connect on a 45 yard field goal to take the lead 20-17 right before the two minute warning.

The Steelers fate would be sealed on their next drive, as Ben Roethlisberger had his pass tipped at the line of scrimmage by Montez Sweat, and intercepted by Washington’s Jon Bostic. Washington would take over at Pittsburgh’s 25 yard line. They would milk the clock down to 17 seconds, and connect on another field goal to extend their lead to 23-17.

The Steelers would suffer their first loss of the season to Washington, 23-17. Alex Smith would finish completing 31 of 46 passes, for 296 yards and one touchdown. Logan Thomas would lead the way, catching nine passes for 98 yards and a touchdown catch. Washington would extend their win streak to three.

The Steelers only finished with 21 rushing yards on 14 attempts. Despite the loss, Watt finished with two tackles for loss and one sack. Big Ben finishes the night completing 33 of 53 passes, 305 yards, two touchdowns and one interception.

The Steelers will travel to Buffalo to take on the Bills Sunday night at 8:20 pm ET.