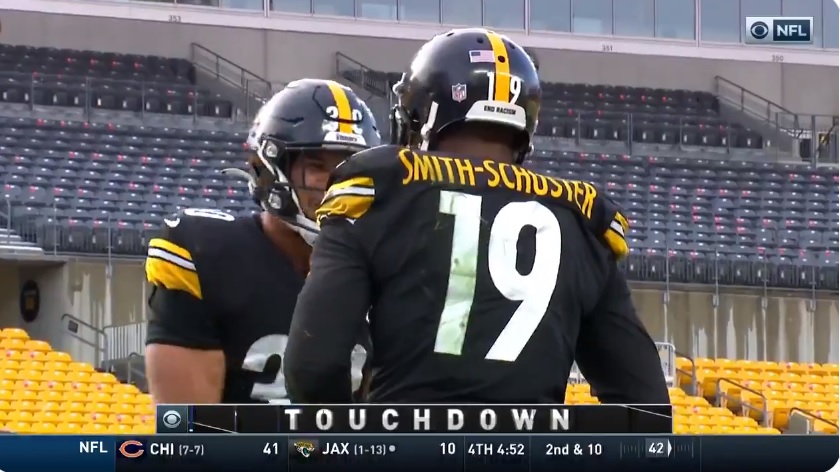 Sunday was a tale of two halves for the Pittsburgh Steelers. In the first half, they felt like a team fighting for the top pick in the draft, not one jockeying for postseason positioning. The second half felt closer to the team who won 11 straight games to begin the season. Ultimately, the latter team won out, beating the Colts 28-24 Sunday afternoon.

For that first half, it was a similar story to the previous three games of the losing streak. An offense with no run game, a quarterback playing his worst football, and a defense that looks worn down and stumbling to the finish line.

Pittsburgh, as has often been the case the last two years, punted on their opening possession. Three straight passes, three straight incompletions. The Colts showed how to start a game. Philip Rivers led them on a nine play, 70 yard drive, ending in a Jonathan Taylor six yard rushing score on third and long.

The Steelers punted on their next two possessions. They finally saw their first signs of life when TJ Watt knocked the ball out of Rivers’ arm as Rivers cocked back to throw deep. Mike Hilton recovered and returned the ball to the three yard line. On third and goal from the one, James Conner squirmed his way over the goal line to tie the game at 7.

But it was all Colts the rest of the half. Indianapolis immediately responded with a lengthy 12 play drive. Rivers found T.Y. Hilton for multiple chunk plays in the passing game. And the rookie Taylor consistently pushed the pile forward, including on his one yard score when it looked like Joe Haden and Vince Williams had him stopped at the line of scrimmage.

Roethlisberger and company went three and out on their ensuing drive. Rivers and the Colts got great field position and needed just two plays to score. Rivers hit Zach Pascal for a 42 yard score on a post, beating Haden, to go up 21-7.

Fumbling a chance to get points at the end of the half, Mike Tomlin didn’t call a timeout with a minute to go and the Colts facing a third and 18. The Steelers didn’t get the ball back until there were 13 seconds left and went into the half trailing 21-7.

The Colts got the ball at the half and added to their lead with a 28 yard field goal by Rodrigo Blankenship. Roethlisberger strung together a 10 play drive that got as close as the Colts’ one on the ensuing possession. But the drive stalled, Roethlisberger throwing incomplete on 4th and goal to James Washington.

The Steelers’ defense forced a three and out and Roethlisberger hit Diontae Johnson for a 39 yard score deep down the right sideline to make it 24-14. Johnson made a spectacular diving catch into the end zone to beat second-year CB Rock Ya-Sin.

That was the catalyst for the Steelers’ offense. The defense held up their end of he bargain, sacking Rivers five times on the day. Late in the third quarter, Roethlisberger quickly drove the Steelers’ offense downfield – partially thanks to a pass interference called against Indy – that led to an Eric Ebron five yard TD. That cut the Colts’ lead to just three, 24-21.

A crucial Cam Heyward third down sack of Rivers forced another Colts’ punt. The Steelers put together a ten play drive, eight passes, finished by Roethlisberger throwing a perfect pass to Smith-Schuster on an over route from 25 yards out. Matthew Wright’s extra point made it 28-24 Pittsburgh.

Alex Highsmith’s pressure forced Rivers into an interception the next drive, intercepted by Mike Hilton deep down the left side. Pittsburgh couldn’t kill the rest of the clock and Rivers got the ball back with just over two minutes left at their own 15. It appeared the Steelers got the game-winning stop but Steven Nelson was called for pass interference on 4th down to keep the drive going. The Colts got as far as the Steelers’ 33 but on 4th and 8, Alex Highsmith’s pressure forced Rivers’ throw to be slightly off the mark and off the hand of Pascal. Pittsburgh needed two kneeldowns to win the game and clinch the AFC North.

Pittsburgh will conclude their regular season travelling to Cleveland next Sunday. Kickoff is set for 1 PM/EST.