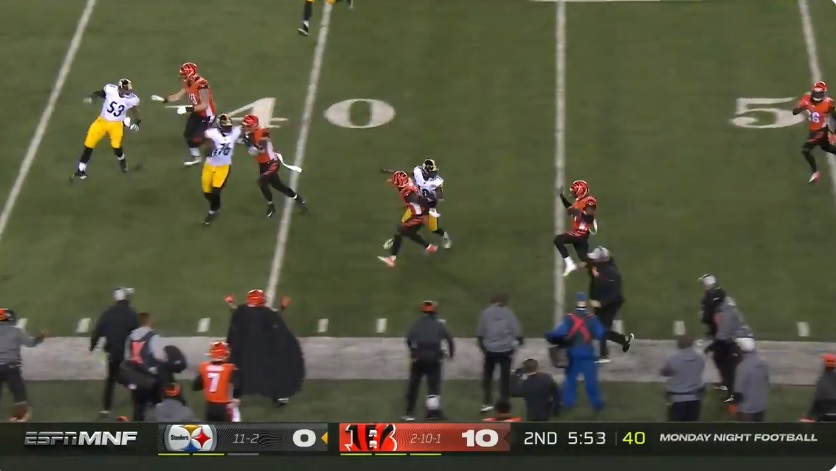 Monday night was supposed to be the Pittsburgh Steelers “get right” game against the Cincinnati Bengals. Instead, it was their “everything’s wrong” moment. A second half comeback wasn’t enough as the Steelers were upset by the Bengals in primetime football, losing 27-17 and dropping their third straight game of the season following an 11-0 start.

Pittsburgh’s first half was as brutal as brutal can be. The offense sputtered throughout, turning the ball over three times. A botched exchange by Ben Roethlisberger, batted by David DeCastro into Bengals’ hands, a fumble by JuJu Smith-Schuster after a crushing blow by Vonn Bell (who clearly wasn’t pleased about JuJu’s logo dancing) and a blind throw by Roethlisberger near the end of the half.

Cincinnati capitalized with two touchdown to Gio Bernard and a field goal by kicker Austin Seibert. The Steelers were into the half trailing 17-0, netting only 40 total yards of offense. The Bengals has 123.

The Steelers showed life coming out of halftime. Roethlisberger went up-tempo on their opening drive, hitting Diontae Johnson down the right sideline for a 23 yard score. After forcing a three-and-out, the Steelers went on a 10 play, 67 yard drive to set up a Chris Boswell 25 yard field goal. That brought things to a one-score game.

But Cincinnati came up large after getting the ball back. The offense stayed on schedule with short throws to AJ Green and carries by Bernard. On 2nd and 2 from Pittsburgh’s 23, Ryan Finley kept the ball on a zone read – rookie OLB Alex Highsmith crashed down on the running back – and sprinted untouched into the end zone for a 23 yard score. The extra point made it 24-10.

Roethlisberger drove the Steelers downfield for a 75 yard play drive, ending in a Benny Snell one-yard dive over the goal line.

Minkah Fitzpatrick made a crucial third down, open-field tackle on Ryan Finley to give Pittsburgh the ball back with 2:17 to go. But Roethlisberger and the offense did little with the opportunity. Roethlisberger missed on first, second, and third down. On 4th and 10, he threw high over James Washington’s head and incomplete.

Notes: Roethlisberger finished the game 20/38 for 170 yards with 1 TD and 1 INT…he surpassed 5000 career completions and 60,000 career yards in the loss…AJ Green led the Bengals with two catches for 40 yards….the Steelers went 4/16 on third down, including 0-3 on 3rd and 1…Derek Watt (concussion) and Eric Ebron (back) left the game with injuries…Pittsburgh will host Indianapolis for their final regular season home game next Sunday at 1 PM/EST.