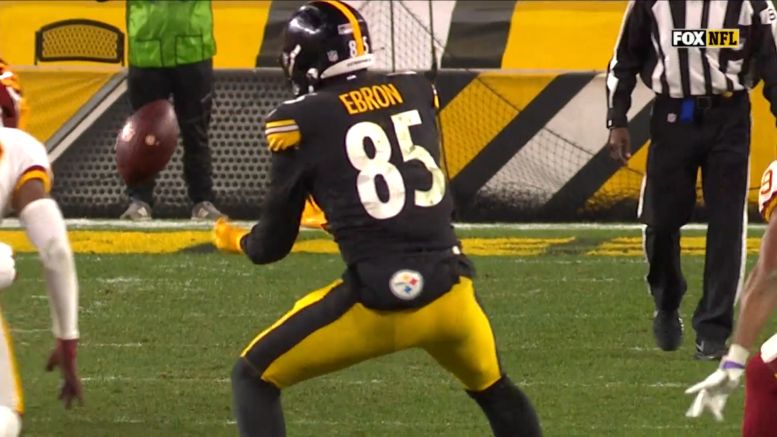 You thought that it was over. You were wrong. For the second consecutive game, the Pittsburgh Steelers’ skill position players have continued to put the ball on the ground, and to nobody’s surprise, it involves the same set of culprits, primarily second-year wide receiver Diontae Johnson and tight end Eric Ebron, who combined for two drops on just the opening drive of the third quarter alone, and then did it again on the second drive of the quarter.

Each of them had already previously had a drop in the game, and JuJu Smith-Schuster also had one dropped pass. According to ESPN State and Info, they have now dropped five or more passes in consecutive games after having only two total games in the previous 15 seasons with that many drops.

The drop numbers are as bad as you think:

Per @ESPNStatsInfo, the Steelers had 7 drops against Washington, their most over the last 15 seasons and most by any team this season. They’ve now dropped a league-high 31 passes this season (10 more than anybody else). #Steelers

Drops, of course, are subjective. What one person calls a drop might for another person simply be an incomplete pass on a difficult catch, or credited to a pass defensed. It really all depends upon how conservative the evaluator is.

Some drops, however, are clear cut, and the Steelers have had a bunch of clear and obvious drops over the course of the past two weeks, during a stretch in which they have had to deal with schedule adjustments. They had just five days to prepare for Monday’s game against the Washington Football Team.

Pittsburgh has had the good fortune of having a primary pass catcher with great hands for long stretches. For a long while, that was Antonio Brown, who had been one of the most sure-handed receivers in the NFL. Before Brown, it was Hines Ward, who was similarly sure-handed.

While Smith-Schuster has pretty good hands overall, they are not at the same level as Brown or Ward, and it’s actually Johnson who has emerged as the volume target in this offense with ben Roethlisberger. While he is a tremendous talent, he is at least approaching double-digit drops on the year, if he isn’t already there—again, depending upon the individual evaluator.

These players will continue to be some of the primary featured targets in the offense next year, and perhaps beyond, so it’s likely that the Steelers offense is simply not going to be as reliable in the pass-catching area as it had been in the past.

Head coach Mike Tomlin said after the last game that catching the ball has to be a “non-discussion” for players at this level of the game whose job it is to catch the ball. Unfortunately, as you can clearly see reading along to this, we are having that discussion once again, and in fact for the second time in a row.