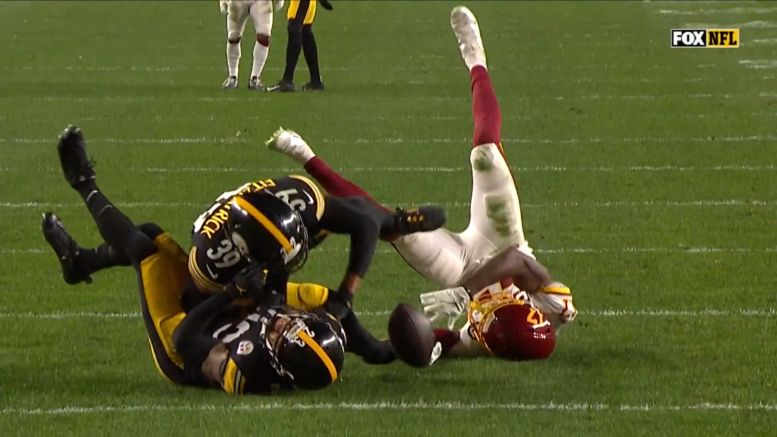 The Pittsburgh Steelers’ past two games have been shuffled as a result of the Baltimore Ravens experiencing a Covid-19 outbreak, which resulted in that game being postponed on three separate occasions, being moved back a total of six days from Thursday, on Thanksgiving, to the following Wednesday.

As a result of that game being moved, the NFL also moved the Steelers’ following game, the one that was just watched against the Washington Football Team, from a Sunday afternoon kickoff time to Monday at 5PM.

One thing that both of those games had in common is that it very much looked like a couple of teams who were being placed in unusual circumstances and being thrown off of their rhythm. In this one, in fact, it was even the production crew off its game.

Not only were the announcers getting facts incorrect—player names, whether or not a team had gone three and out—but the graphics were off. As Ben Roethlisberger entered the field for the opening drive, a graphic listed him with nine touchdowns in three games against the NFC East so far this season—which is accurate—but with 250 interceptions. And a quarterback rating of…35/12? I don’t even know what that was supposed to reference.

Of course, there was plenty going wrong on the field, too, from Roethlisberger’s opening pass going yards out of bounds down the right sideline to JuJu Smith-Schuster dropping a third-down pass on the second drive. J.C. Hassenauer failed to snap a ball, resulting in the rest of the offensive line called for a false start.

Worse still, the Steelers had a touchdown taken off the board early in the second quarter because Alejandro Villanueva was flagged as an ineligible man downfield. On the following play, Eric Ebron couldn’t hold on to a tight-window throw in the end zone. But it all worked out in the end, as two plays later, Roethlisberger would find his original target, Diontae Johnson, for the score.

We even ended the first half with an ‘administrative issue’ that basically allowed Washington to attempt a field goal kick at the end, the officials having an inability to get the K ball—the ball used to kick—resulting in the clock stopping.

And that’s not even mentioning all of the dropped passes and the batted balls in the second half. For two weeks now, this Steelers team, and their opponents, have looked discombobulated, as though they recognize that they are playing when they’re not supposed to. It’s resulted in a pair of close games, one their first loss of the year.