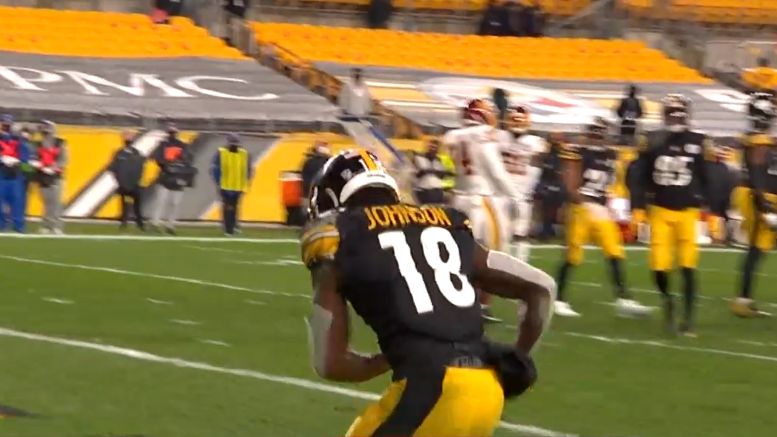 This was one of those games in which it seemed like nothing would come easy. The Pittsburgh Steelers opened the game by going three and out on each of their first two drives. While they did connect on a 30-yard pass on their third drive, it would quickly stall after that.

Their fourth drive was a bit like pulling teeth, but it provided an important turning point, involving numerous conversions on third down, a red-zone touchdown that was taken off the board due to an ineligible man downfield penalty, and then a re-do on the touchdown that finally counted.

Given the Steelers’ struggles both on third down and in the red zone last week against the Baltimore Ravens, it was a significant series in the game. This past Wednesday, they went just 1-for-4 in the red zone, and their 6-of-14 performance on third down was only bolstered by some late-game conversions that didn’t represent their overall performance over the course of the game.

The drive began late in the first quarter, with Ben Roethlisberger finding tight end Eric Ebron for 13 yards—their first opening play of a drive to go for a first down. After two short passes, they got their first conversion on third down with a two-yard Benny Snell carry on 3rd and 1.

It would continue to go that way for the rest of the drive, every three plays needing a conversion on a possession down. Next, it was a 17-yard out route to Diontae Johnson on 3rd and 12. After a batted pass on 2nd and 5, Roethlisberger floated one to Ebron for 15 inside the red zone.

Originally, it looked as though Roethlisberger found Johnson for a touchdown on 2nd and two, but Alejandro Villanueva was flagged for being an ineligible man downfield. An incomplete tight-window throw to Ebron in the end zone resulted in another third-down conversion, this to Chase Claypool to set up first and goal.

It ultimately goes down as a 14-play, 77-yard touchdown drive, but it was more than that, and certainly took more than most to manage. I’m not sure how many touchdown drives feature four third-down conversions, especially in the middle of the first half, in addition to a touchdown being taken off the board.

The only problem is that they were never able to build off of it. They got into the red zone again a short time later and they were unable to get the ball across the goal line. They even had six cracks at it because Washington was flagged.

Then the second half was just completely a mess. They scored just three points. In the end, that one touchdown drive was a mirage. The fact that it was so tough-earned wasn’t a turning point. It was just a symptom of how much they’re struggling, that even one basic touchdown drive was like pulling teeth.