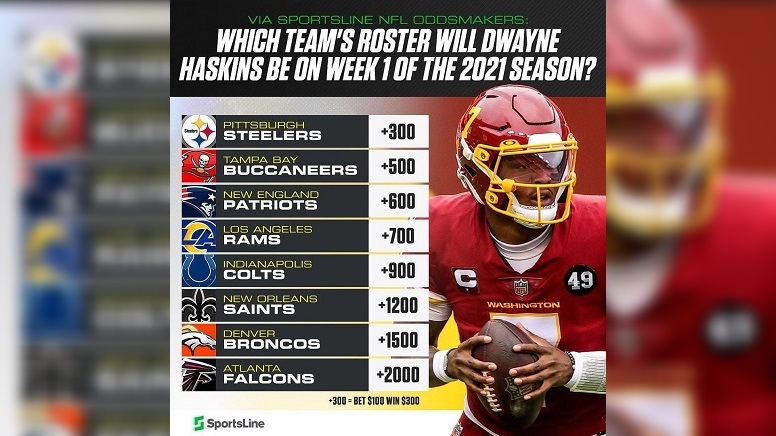 On Monday, the Washington Football Team parted ways with second-year quarterback Dwayne Haskins, their first-round pick in the 2019 NFL Draft. Since then, Haskins has cleared waivers and the assumption is that another team wont take a chance on him until after the 2020 season is over with. So, which team is currently the odds-on favorite to sign Haskins? According to Sportsline, it’s the Pittsburgh Steelers at +300.

Below is what Jeff Kerr of CBS Sports wrote recently about Haskins possibly landing with the Steelers.

The Steelers have Ben Roethlisberger entrenched as the starting quarterback until the end of next season, but they don’t have a quarterback in the pipeline to be his potential successor. Could that player actually be Haskins? Pittsburgh could take a flyer on the former No. 15 overall pick, getting him a second chance in an organization that is the opposite of dysfunctional (Ron Rivera is quickly getting Washington out of the dysfunctional phase in Year One).

Mike Tomlin doesn’t put up with off-field antics, but here’s a chance for Haskins to repair his reputation and re-learn how to play the quarterback position under offensive coordinator Randy Fichtner and quarterbacks coach Matt Canada — who has worked with Colts quarterback Jacoby Brissett in the past.

The Steelers need to improve the backup quarterback spot, as Mason Rudolph and Duck Hodges aren’t exactly players Tomlin can rely on if Roethlisberger goes down with another injury. Haskins can use 2021 as a developmental year and convince the Steelers to give him a shot as Roethlisberger’s successor.

Yeah, sign me up to bet that Haskins will land anywhere but Pittsburgh with the Steelers. While the Steelers heir apparent to starting quarterback Ben Roethlisberger indeed probably isn’t currently on the roster, taking the time to babysit Haskins a while to find out if he can possibly be fixed and be that player just doesn’t seem fruitful. It also kind of goes against what the organization does as well. Haskins has a very Jamarcus Russell-feel to him right now and if you d not know what that means, Google it.

Also, just read the latest report below from Les Carpenter on Haskins following Washington cutting ties with the young quarterback. Below is a quote from that article.

Also via @Lescarpenter: Coaches "were stunned by his constant late arrivals to meetings, failure to master the playbook and refusal to prepare for games as diligently as NFL quarterbacks must. Several around the organization questioned his ability to lead" https://t.co/fvxeyCfQDI

Mostly, though, his Washington tenure was filled with odd incidents, such as missing the final snap of his first NFL victory because he was taking selfies with fans, or the photos that emerged last week of him partying maskless hours after a loss, a violation of league coronavirus protocols. There were loads of complaints by frustrated coaches on two staffs who were stunned by his constant late arrivals to meetings, failure to master the playbook and refusal to prepare for games as diligently as NFL quarterbacks must. Several around the organization questioned his ability to lead and repeatedly said poor throws in practice would carry over into games.

Washington clearly over-drafted Haskins, who made all of 14 starts during his college career at Ohio State. With Washington, Haskins had 2,804 passing yards, 12 touchdowns, 14 interceptions, and a 3-10 record as a starter. In a word, he was awful.

Ian Rapoport of the NFL Network reported Wednesday that Haskins is receiving interest from several teams, including the Carolina Panthers. Even so, Haskins is unlikely to sign before the end of the season, but the Panthers and others remain intrigued by the young quarterback.

Time will tell, obviously, when it comes to where Haskins will ultimately land. The fact that Washington parted ways with him so soon is very disturbing and the fact that the quarterback cleared waivers with such an affordable contract that included a fifth-year option is even more disturbing. While Haskins will eventually land with a team, my betting money is that team not being the Steelers.