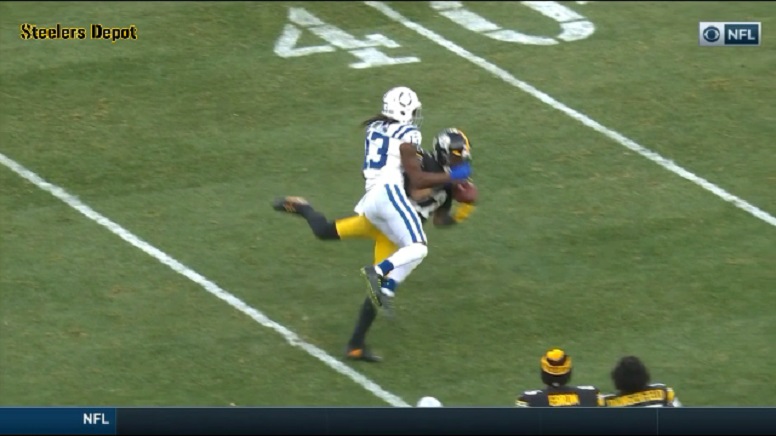 Against the Indianapolis Colts on Sunday, Pittsburgh Steelers cornerback Steven Nelson registered six total tackles in the team’s come-from-behind win. Nelson also had an interception against the Colts in the fourth quarter, but it was canceled out because of him being flagged for pass interference on the play. Nelson, as you can tell by his postgame tweets, was not happy about that penalty being called against him.

Glad we won but them refs gotta get new jobs after today stole my pick for what ? A free sandwich?

Nelson’s complaints are most likely related to his fourth quarter interception of a pass by Colts quarterback Philip Rivers on a fourth down and 5 from the Indianapolis 31-yard-line with 1:55 left in the game. Had that interception stood, the game would have essentially been over with because the Colts only had one timeout remaining at the time. Instead, the pass interference penalty on Nelson gave the Colts a fresh set of downs with the ball at their own 40-yard-line.

The pass in question was intended for Colts wide receiver T.Y. Hilton and you can see Nelson’s coverage on that play below. So, did Nelson get jobbed by the ref on that play? There certainly was a lot of contact between the two players before Hilton broke to the outside. Personally, the replay makes it look worse than it looked in real-time. What say you?

That Sunday penalty on Nelson marked just the fourth time this season he’s been flagged, and it was his first for defensive pass interference. Two of his other three penalties on the season were for unnecessary roughness in Weeks 5 and 11. His other penalty happened way back in Week 1 and was for illegal contact.

Here’s to hoping that Nelson does not get fined for his tweets about Sunday’s officiating.

While we are on the topic, the refs did miss a blatant holding call on Steelers outside linebacker T.J. Watt during a first down pass play in the first half. The Colts went on to score their second touchdown of the game not long after the missed holding call.

T.J. Watt being held big time and was not called #Steelers pic.twitter.com/FBer2hz9CE