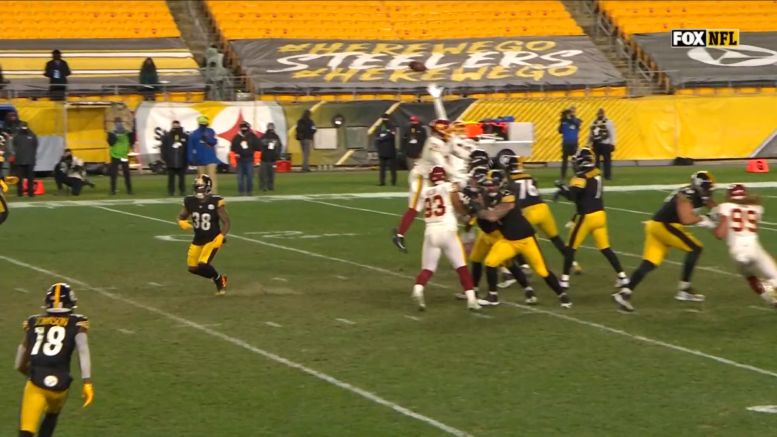 Several weeks ago, after the Tennessee Titans game in which quarterback Ben Roethlisberger had multiple balls batted down at the line of scrimmage, one of which went for an interception, the Pittsburgh Steelers did not seem overly worried about it.

“We’re not too alarmed with it yet”, Roethlisberger said after the game. Offensive coordinator Randy Fichtner said, “I share the non-concern”. Left guard Matt Feiler said of Roethlisberger’s high number of batted passes that it was a fluky stat, even though it was still disappointing as an offensive lineman.

I don’t know that they can continue to express a lack of concern after Monday night’s performance against the Washington Football Team, during which Roethlisberger has three passes batted down from the line of scrimmage.

All three of them were batted down by Montez Sweat, and the final one resulted in an interception, which came with just two minutes remaining in the game, trailing by three points, and giving Washington possession within field goal range.

According to Pro Football Reference, Roethlisberger already came into this game with 10 batted passes on the season, with tonight’s three of course bringing it up to 13. Pro Football Reference had him at 11, tied for the league lead with Cam Newton, so he would now have 14 by their accounting.

Either way, it’s a lot of batted balls, and it’s a problem. They’ve now lost a game in no small part because of it, and two of his seven interceptions on the season have been as a result of passes being batted down at the line of scrimmage.

Granted, for a 10-1 team that is in first place in the conference—they retain control of the first seed over the Kansas City Chiefs because the Chiefs’ loss is in-conference—it’s a pretty minor problem. Yes, this game showed that they have a lot of others, such as dropped passes.

But I think it’s fair to say that the Steelers can no longer brush off this issue. How much of it is a product of the fact that defenses know that he is getting the ball out quickly, and so they are more active and aggressive with getting their hands up? How much of it is on Roethlisberger?

There are only five quarterbacks in the NFL this season with at least 10 passes batted down at the line of scrimmage, according to PFF. Roethlisberger has at least three more than all of them. This has to be cleaned up, because Sweat isn’t the only defensive lineman who knows how to get up in the air.