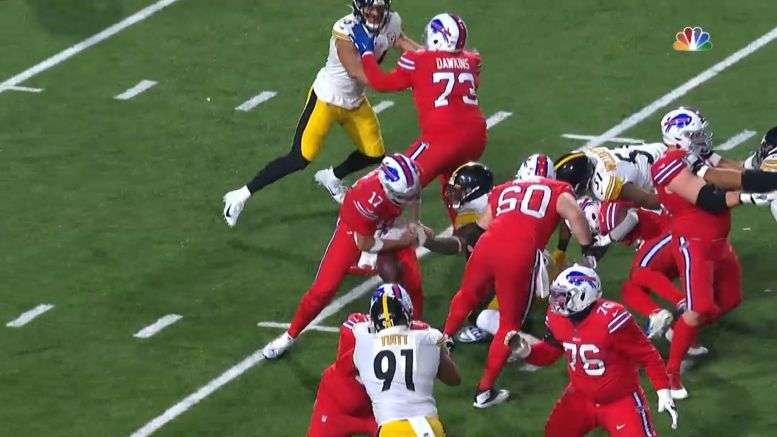 For the 70th consecutive game, dating back to the middle of the 2016 season, the Pittsburgh Steelers recorded at least one sack. That is the most consecutive games with a sack in NFL history now, a feat that they achieved during Sunday’s night’s game against the Buffalo Bills, which puts them past the 69-game mark set by the Tampa Bay Buccaneers from 1999 to 2003.

Last week, it was linebacker Robert Spillane who record the sack that tied the record. This week, it was defensive lineman Tyson Alualu who would record the sack that broke the record. These are not exactly the typical names that you would expect to see recording sacks, but in a way, it’s also fitting, because it’s a testament to the fact that it takes everybody to have such consistency in this department.

They are also on pace to record 50 or more sacks four straight years, another remarkable aspect of their run. It helps to have some All-Pro pass rushers are your disposal like T.J. Watt and Cameron Heyward, and some other very good rushers like Bud Dupree and Stephon Tuitt, but there’s no penalty for having quality talent at your disposal.

Watt entered this week with the outright lead in sacks with 12 on the season through 12 games, but the Los Angeles Rams’ Aaron Donald had a sack and a half on Thursday, putting him at 12.5 on the season. Myles Garrett of the Cleveland Browns is also up there, but will play on Monday night.

Aside from Watt, Tuitt is also having his best season, and he came into this game with eight sacks, which is a sack and a half more than he had had in any other season of his career up to this point. Dupree, before suffering a torn ACL a couple of games ago, also had eight and was headed toward his second consecutive season of double-digit sacks.

Somewhat amazingly, though, they came into the game without anybody else having more than three on the year, with Heyward, Mike Hilton, and Vince Williams (who is on the Reserve/Covid-19 List) all at that number.

Equally amazing is the fact that that was the only sack that they would get in the entire game, and they wouldn’t even get much more pressure on Josh Allen after that play. The defense played very well in the first half. The second half…not so much. But then, the offense didn’t play well in either half.