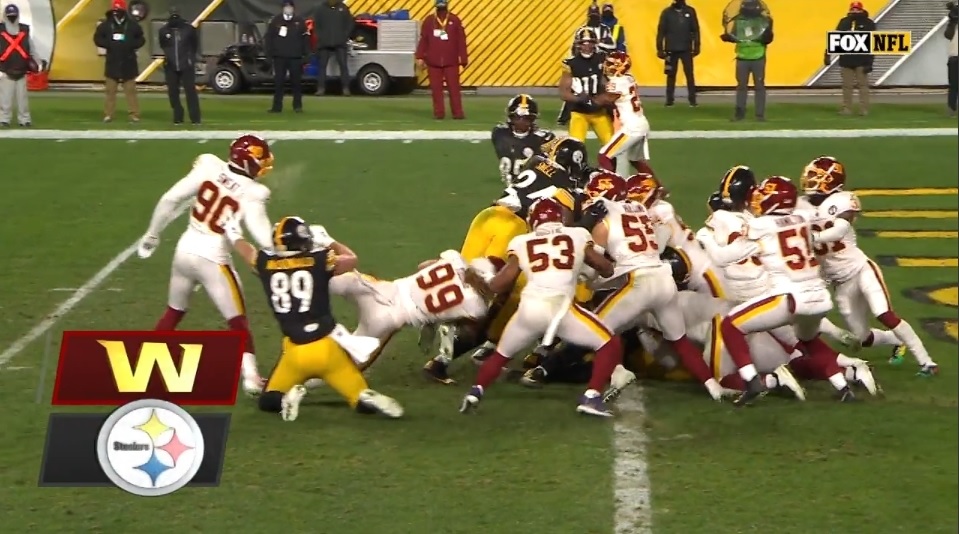 Your weekly dose of weird from the first loss of the season.

– Pittsburgh ran for just 21 yards Monday. That’s tied for their third fewest since the merger. Only 1970 against the Broncos (18 yards) and 2018 against the Ravens (19 yards) were worse yardage outputs. It also ties a 21 yard game in 2006 against Baltimore.

– This was a game that set rushing back for both sides. 66 combined rushing yards for Pittsburgh and Washington (45 for Washington, 21 for Pittsburgh) the fewest combined yards in a game since the Raiders and Broncos played in 2015. They combined for 61.

– Ben Roethlisberger hasn’t been sacked in five straight games and last 252 pass attempts. They’re just the eighth team since the merger to have a 5+ game sackless streak. I’ll get more exact info later this week; Stathead isn’t playing nice right now as I try to filter the results.

– Last week, we brought you the stat that JuJu Smith-Schuster and Diontae Johnson became the first two Steelers’ receivers in team history to have 8+ catches for under 50 yards.

Smith-Schuster followed that up with a seven catch, 28 yard performance against Washington. He became the first WR to have 7+ catches for less than 30 yards since Jacksonville’s Rashad Greene in 2015.

Over his last two weeks, Smith-Schuster has 15 receptions for 65 yards.

– Jerald Hawkins became the first Steelers’ offensive linemen targeted on an offensive play (not special teams so exclude Alejandro Villanueva) since Maurkice Pouncey caught a pass against the Bengals in 2014. I’m pretty sure that wasn’t by design. Willie Colon, Max Starks, and Jim Sweeney are the other three offensive linemen to register a target in the Kevin Colbert era.

– Pittsburgh’s offense is just 2-7 in the red zone the last two games. 1-4 against Baltimore, 1-3 against Washington.

– The Steelers have gone for it on 4th and 1/2 seven times since the Cowboys game. They’re 1 of 7 on those plays. The only conversion a 17 yard run by James Conner he pretty much picked up on his own.

– Matthew Wright made his first field goal in a game that counted since his final college game, January 1st, 2019 against LSU. An upset win for his UCF team.

That last college FG was good from 37 yards out.

Today’s field goal? A 37 yarder. Like riding a bike.

– TJ Watt forced his first fumble of the season. He had an NFL-leading eight last year. He also regained the NFL’s sack lead from Aaron Donald with his 12th of the season.