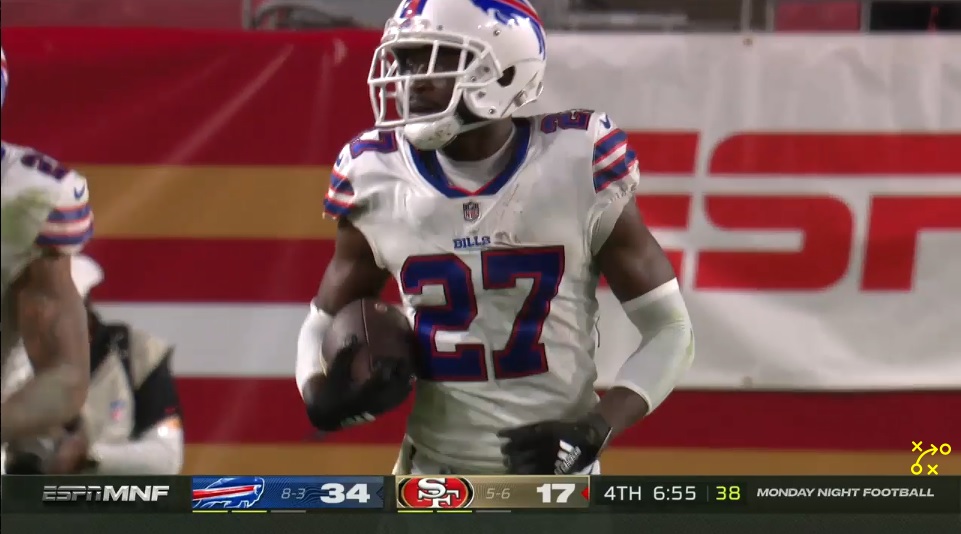 Their run defense has been a sore spot this season. Some ugly numbers in key areas. Allowing 4.7 yards per carry, tied for 28th worst in football. And the 16 rushing TDs they’ve given up are tied for 26th most. Giving up explosive plays here, too. 47 runs of 10+ yards (tied 27th) and eight of 20+ yards (tied 24th).

Buffalo runs a 4-3 front. Those have typically given Pittsburgh more trouble in the run game than the odd fronts they practice against every day. Of course, the Steelers’ run game has struggled against any look over the last two months.

Back to the Bills. Their leading tackle is safety Jordan Poyer with exactly 100 of them. Third year LB Tremaine Edmunds – Terrell’s brother – is second on the team with 91.

Buffalo shifts their front a lot. They’re capable of shifting the line weakside with the linebackers strongside… 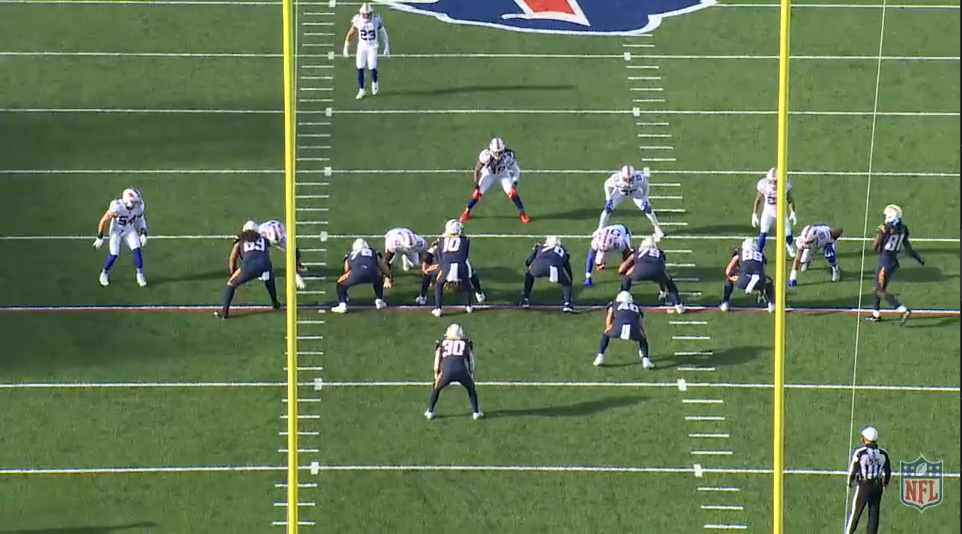 And will even fan out with two three techs. That makes them prone to running up the A gaps, as the 49ers did here.

And when they stack the box against eight man fronts, they’ll often slant their DT and run stunt with their LBs to create penetration up front knowing they have immediate secondary support. In the first clip, watch #91 slant down and shoot his gap. In the second, watch #91 again slant his gap with the LB replacing into the B gap.

Some other defensive stats for this unit. Slightly below average in points per game, allowing 25.5 which ranks 18th overall. Some highs, some lows. Four games of 30+ points, three games holding the opposition under 20. This defense has been poor on third down (44% conversion rate, 24th) and average in the red zone (61.2%, 15th).

Good bit to discuss here. Pass defense has been better than their run defense but still not as good as it could be or where it was last season. They’re tied for 22nd in opposing QB completion percentage at 66.7% and 21st in YPA at 7.4. Better job keeping receivers out of the end zone with 19 given up this season, tied for 13th in the league. The Bills have allowed 36 completions of 20+ yards (tied 12th best) and seven of 40+ (tied 19th).

As a unit, they’re doing a decent job getting after the QB. Their 30 sacks are tied for 12th most this season. But that number should be a little higher considering their blitz rate of 37.2% – 8th in the league – and they’re actually struggling to get pressure. About 23.5% of the time, which is only 21st.

Their sack leader is AJ Klein, who often plays off-ball linebacker. So surprising to see him on the list. Their sacks are spread out among the team. No one guy is dominating. Combined, their DBs have 3.5 sacks this season so they’re bringing pressure from all over the lot just as they did when they sacked Devlin Hodges four times a year ago.

Buffalo has ten interceptions this season. Led by Tre White. He had six last year and up to three this season. One other element is how the Bills’ defensive line are tipping passes, a real problem area for Pittsburgh in recent weeks. Buffalo defensive linemen have deflected ten passes this season. Defensive end Mario Addison paces the group with four of them.

Schematically, they do a good job of showing pressure. Lot of 5 man/5-1 fronts putting the LB head up over center. Cover up every linemen, show potential pressure into every gap. Doesn’t always come and sometimes they’ll stunt and twist but they’re going to stress and strain the defensive line a lot of the time. 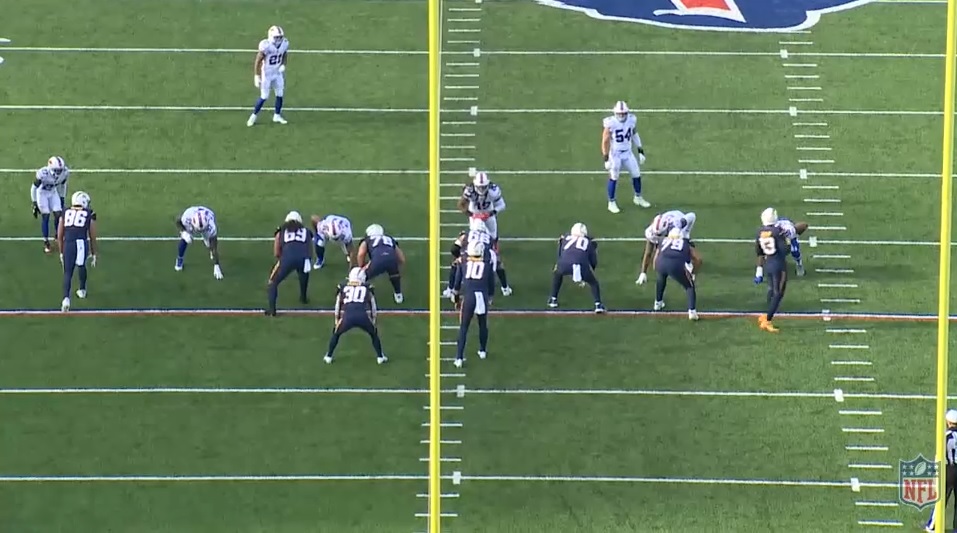 Get a lot of Cover 1 Rat/Robber. Show a two high safety look pre-snap, spin down, and the safety looks to rob anything over the middle. One way the Bills will look to take away JuJu Smith-Schuster Sunday night.

Because they have a lockdown corner in Tre White, they can play their coverages differently than most other teams. See a lot of split coverages. Zone to one side with White in “MEG” (Man Everywhere he Goes) coverage, often on the backside. An example. Here’s White playing man to man on the X receiver to the bottom while they play zone to the trips side.

The Buffalo Bills come in to this big AFC matchup relatively healthy on the defensive side of the ball. They got a linebacker back last week and have another designated for return and they have two defensive players on their injury report this week.  Let’s take a look at the individuals.

We’ll start up front from left to right.  Jerry Hughes is the left defensive end. He is their best pass rusher with good quickness at the snap and he uses is his hands well and is best winning with speed around the edge. Vernon Butler is the 1 tech and is a stout run defender, solid against the double team and has active hands.  Ed Oliver is the 3 tech and is athletic with good motor and quick hands. He has the snap quickness to penetrate gaps and disrupt plays. Veteran Mario Addison is the right defensive and is a consistent contributor versus the run and the pass with good play strength and is good on twists to the inside.

Addison (97) is on the left side of the screen and will use his hands well to hold off the block of the left guard before shedding him to the outside and accelerating to chase down the QB for the sack.

Backing up the starters is a diverse group. Rookie DE A.J. Epenesa has powerful hands and the strength to set the edge and likes to use power rushes. Darryl Johnson is a raw, athletic DE who converts speed to power well and can bend around the edge. Quinton Jefferson is on the injury report with a hip issue. He’s a 3 tech playing with good pad level and solid quickness to play in a 1 gap scheme. He likes to swim to the inside when rushing the passer. Justin Zimmer and Harrison Philips are part of the 1 tech rotation. Zimmer has very good play strength and good athleticism while Philips is stout defender playing with good pad level and a balanced base.

At linebacker Tremaine Edmunds is the man in the middle. He is a very good combination of size and speed to play sideline to sideline, fill gaps or blitz from the inside or edge. A.J. Klein became a starter due to injury and has solid mental processing, attacks downhill and is adequate in coverage.  Matt Milano was that injured starter (pec, hamstring) and he just returned last week were he played mostly on third down to work him back in. He is agile, is good in coverage and is an aggressive blitzer.

Here is a look at Edmunds (49) who reads the play quickly, will slide to the right before cutting up field into a gap to make the tackle for a loss.

The linebackers also include a familiar face in Tyler Matakevich an excellent special team player and good play processor. Andre Smith has been getting some snaps and plays with good leverage and is a strong tackler. Tyrel Dodson (hamstring) may be back this week from injured reserve and he’s a physical player with strong hands.

The safety tandem of Micah Hyde and Jordan Poyer are a strong pair and work well together.  They are practically interchangeable and you’ll see them both playing deep and near the line of scrimmage. Hyde is the free safety with solid range and is a very good tackler. Poyer is the strong safety and will fill gaps versus the run, is also a good tackler and will blitz from the slot. Dean Marlowe has good size and might get a few snaps on defense but is primarily as special teamer. Jaquan Johnson is on the injury report and as of Thursday had not practiced this week.  He’s isn’t that big but likes to throw his weight around and is a solid tackler.

Here you’ll see Poyer (21) communicating pre snap to get everyone in the right position and then he will see the gap and attack into the backfield before getting help from Hyde (23) to make the stop in the red zone.

Tre’Davious White is their best corner.  He excels in Man coverage, has good length, likes to disrupt routes with his hands and will attack any ball in his vicinity. Whomever he covers will have a difficult night. Levi Wallace starts opposite of White and is better playing Zone coverage where he can play facing the QB. He has adequate play strength in coverage, is an adequate tackler is used to blitz from the outside. Taron Johnson is the nickel corner who is active against the run and is a good tackler and does his best to hang in against bigger physical receivers. Veteran Josh Norman is the primary back up on the outside and has played just 1 snap the last two weeks.  Siran Neal has good size and is a physical player who plays a lot on special teams.

Against San Francisco, White (27) is to the top of the screen and will move wider with the motioning running back. He has him in Man coverage and will trail him about 30 yards across the field before undercutting the throw and wrestling it away from the receiver for the interception.