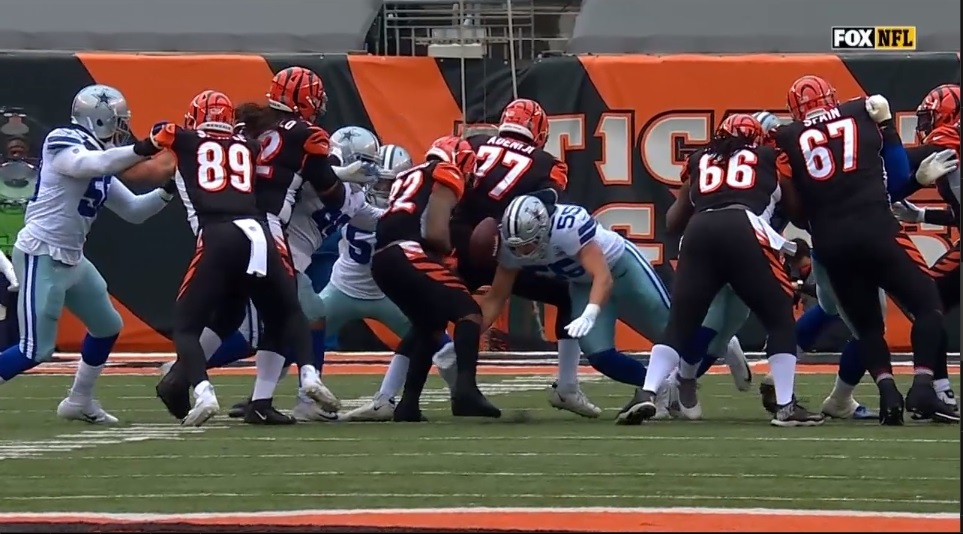 Today, we’re checking out the Cincinnati Bengals’ offense for a second time this season.

A run game that’s gone ice cold with Joe Mixon shelved the second half of the season. He won’t play Monday night. For the season, their run game is averaging 3.8 YPC (that’s tied for 28th) with just nine rushing scores (tied 27th). They do nearly lead the league in one category…fumbles. Eight of them, tied for 26th most in the league. Was really ugly in their last loss to the Dallas Cowboys. Two fumbles by backs, one by a receiver on 4th and 1 (that they would’ve otherwise converted). Let’s see if Pittsburgh – especially guys like Cam Heyward, Tyson Alualu, and TJ Watt – can punch a ball out tonight.

As you might expect, they’re not getting any big runs out of this offense. Just 25 of 10+ yards which is dead last in the league and two behind the Steelers. And only five runs of 20+, tied for 23rd. Of those five, Joe Mixon (again, not playing) is responsible for three of them, Joe Burrow (on IR) responsible for one, and Tyler Boyd the other. Gio Bernard and Samaje Perine have combined for 117 attempts this season. Their long is 16 yards.

Conceptually, they pull linemen about as much as any team in football. Whether it’s counter, pin/pull, dart, or this interesting fold block on the backside of runs between the LT and LG. Comes when the Bengals want to run weakside.

Being able to penetrate and disrupt the track of the pullers would be ideal to slow down and string out these runs. But guys on the edge, especially rookie Alex Highsmith, have to be strong at the point of attack as guards and tackles meet them downhill.

And they have their traditional inside zone game, too. As Josh writes about below, Trayveon Williams is the best guy in these situations as a decisive, explosive back.

Some other offensive stats. For the year, their offense is an ugly 30th at 18.8 per game. Even worse without Burrow. Without him, they’ve scored: 17, 7, and 7 points in their three games since Burrow got hurt (and they had nine in the game he went down). Of those last three, seven of those points came on a KR TD. So they’ve had just three offensive scores in their last three games and averaging ten points a game over their last five. Yikes.

They are 29th on third down at 37.3% and 28th in the red zone at 51.3%. Terrible situational numbers. They’re in the holiday spirit of giving the football away with 22 turnovers in 2020. That’s tied for 27th. They’ve turned it over at least twice in each of their last five games. Unsurprisingly, their turnover differential is -10, tied for 29th worst.

Watch out for their special teams. Might be their best way to generate offense at this point. Brandon Wilson is 5th in KR average while Alex Erickson is 6th in PR average. Upback Shawn Williams has 49 yards on two fake punts this year, one coming late in their loss to the Steelers.

Ryan Finley is next man up. Third stringer replacing the injured Brandon Allen, who will miss with a knee injury. 1st overall pick Joe Burrow suffered a serious knee injury a few weeks ago that will likely cause him to miss a good chunk of 2020. Finley’s thrown 19 passes this season and already been intercepted twice. He did make a start against Pittsburgh last season, struggling with his accuracy but playing reasonably well, all things considered.

The offense has been very conservative, especially without vertical threats like John Ross in the mix. 6.5 YPA is tied for 25th, 16 passing TDs are 27th. Those numbers are still more reflective of Burrow’s time under center.

Common thread for all these QBs have been sacks. As a team, they’ve been dropped 46 times this year. That’s second most only behind the Eagles. Finley has somehow been the worst offender. He’s been sacked seven times this year. And only thrown 19 passes. It leads to an absurd, 26% sack rate. Sample size is small, I know, but he has the fourth highest sack rate of any QB with 15+ attempts. It’s the highest since Atlanta’s David Archer had a 28% sack rate in 1984 (seven sacks on 25 dropbacks).

Tyler Boyd is still their top weapon, leading the team in targets and receptions. Does a lot of damage on possession downs. Pittsburgh will likely employ a similar gameplan as they did in the first meeting, even though they’re facing a different QB. Bracket coverage on Boyd in the slot on third down, force passes downfield and outside the numbers.

It feels like the Bengals have some better threats on the outside this time around. Tee Higgins has become a bigger piece of the offense as lesser talents like Auden Tate have taken a backseat. Higgins is averaging a team-high 13.4 YPC and paces the group with five TDs. He has 9+ targets in five of the last six games.

This group still isn’t making many plays downfield. Dead last in completions of 20+ yards with only 26 (less than two a game) and only four pass plays of 40+ yards (tied 25th).

With their poor QB play, they’ve looked to boost things by running a lot of boots and playaction from under center. Often see it on the first play of drives out of two tight end sets and reduced WR splits.

And watch out for quick-hitting jet passes to receivers, usually Boyd, to try to gain the edge. Way to make their run game more explosive out on the edges.

Against Dallas, at least, AJ Green rose from the ashes. Brandon Allen loved going to him as the singled up, backside “X” receiver. At the end of the first half, they threw pass after pass to him. Curl, fade (in no huddle), and finally a slant for a TD. All in three of their last four plays.

Riding a two-game losing streak, the Steelers get the perfect get-right game in Week 15, riding into Cincinnati to take on the 2-win Bengals.

Cincinnati might be down to its third-string quarterback for the Week 15 matchup, which will be a big boost for the Steelers, who have struggled in the second half the last two weeks against Alex Smith and Josh Allen.

With likely no Brandon Allen this week, Cincinnati’s offense could be significantly hindered. Once Allen took over for the injured Joe Burrow, the offense took a step back, but Allen played well overall in relief.

He really had developed a strong rapport with second-year tight end Drew Sample, and really spread the ball around to Tyler Boyd, Tee Higgins, AJ Green, and Auden Tate.

Allen hurt his knee in Week 14 late in the game, a game in which he was playing relatively well.

He showed a decent arm with good accuracy and really seemed to make decisions quickly to get the football out. He showed good work in play-action too.

Here against Dallas in Week 14, he does a great job selling the play-action before then getting his head whipped around as soon as his plant foot hits the turf, throwing a high, tight strike to Green in traffic to move the chains.

Allen also did a really nice job getting the ball out quickly on short throws, protecting the football and giving his guys a chance to make plays in space.

Ball placement is great here, leading Boyd to the sideline with the throw, and Sample does a nice job on the outside blocking it up to spring Boyd for the 72-yard touchdown.

As of late, Sample has really emerged as a pass-catching threat in Cincinnati’s offense.

In his last three games, Sample has hauled in 13 of his 36 passes on the year, including a seven-catch effort against the Dolphins in Week 13. He’s big, physical and has sure hands. He’s not very good after the catch, but he’ll secure the football and force defensive backs to tackle him.

Cincinnati has done a great job of moving him around within the offensive formation as of late, allowing him to use his size and athleticism to win on routes as the possession tight end.

Make no mistake though, this passing game runs through Boyd and Higgins. Steelers fans know all about that duo, considering what Boyd has done over the years, while Higgins went off in his first game against the Steelers earlier this year.

The nice thing though, as I said earlier, is that it looks like it will be Ryan Finley and not Allen. The last time Finley faced the Steelers in 2019, he finished 12-for-26 with 192 yards a score.

In the backfield, the Bengals are in a rough spot. Joe Mixon remains out, and Gio Bernard fumbled the football last week, resulting in a benching. Second-year back Trayveon Williams also fumbled the football and was benched for a short time, giving Samaje Perine some run.

This offense should probably lean heavily on Williams this week, thanks to his burst, vision and power. He’s a really solid dual-threat back that might be the future behind Mixon.

Up front, the Bengals have been a revolving door along the offensive line due to injuries and poor play. I expect them to line up like this on Sunday, left to right:

We all know how poor of a right tackle Hart is, but left tackle is a key spot right now for the Bengals. Adeniji had been playing well in place of Jonah Williams, but Fred Johnson earned some run last week against the Cowboys. He could see some playing time on Monday against the Steelers at left tackle.

Inside, Spain has had issues with penalties the last few weeks, but he’s solid in the run game, as is Su’a-Filo.

On special teams, the Randy Bullock should be back this week. He’s been mostly up and down on the year. He has a strong leg, but accuracy really lacks. Punter Kevin Huber is a solid veteran who is good at direction punting, pinning returners to the sideline.

Brandon Wilson and Alex Erickson will return the kicks on Monday. Wilson is an elite-level special teams player in this league. He does a little bit of everything and has home run speed.

Erickson is usually solid returning punts, but he fumbled against the Steelers a few weeks ago and nearly muffed a couple of punts in recent weeks.

Aside from the loss of Burrow and the injury to Allen, this team hasn’t changed all that much offensively and on special teams from a few weeks ago.