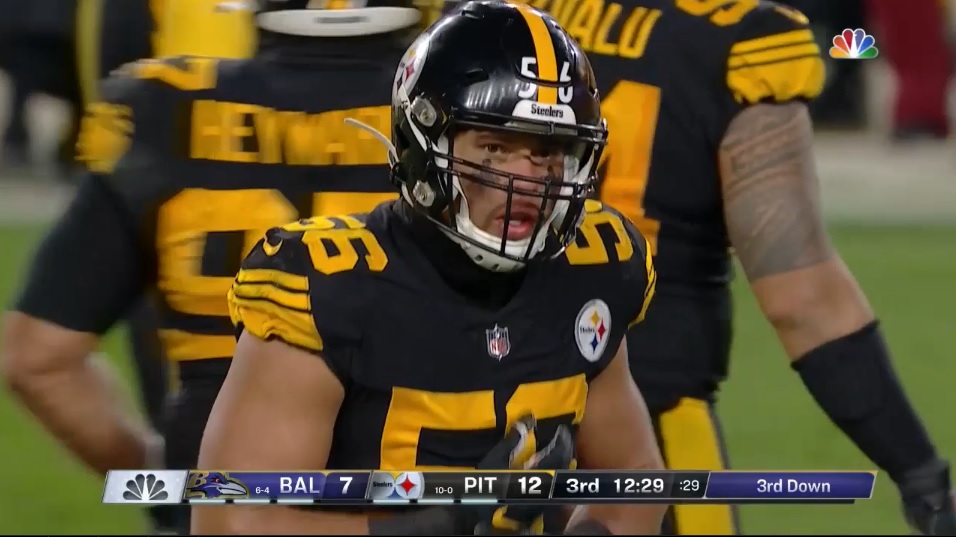 He had a good game overall but it could have been better. His first target was a deep shot down the right side and if he had gone up with his hands instead of letting it get to his body the defensive back would’ve had less of a chance to break up the pass.  The first half he ran a lot of deep routes and that was not very effective in a quick passing offense.  The second half he was running more short routes and received more targets.

In the red zone they lined him up in the backfield before motioning him out to the right. He was covered well on his Out route but showed very good hustle first on the scramble drill working across the field and then getting in on the tackle on the interception. He was targeted on a slant on the left side where again he let the ball get to his body. If he had extended his arms he may have gotten a pass interference call as the DB swiped his right arm a little early.

He was targeted on fourth down play that was knocked away and third down pass that was defended well and kept him well short of the line to gain. He used his hands much better in the second half.  He his reps on special teams included a solid kick out block on one of the kick returns.

His first two pass rushes didn’t get much pressure with the first having him slipping to the ground around the edge and the second having a lot of side to side movement and no forward. He had one rep in coverage on a slot WR and was in solid position at 15 yards down field. He was called for a neutral zone infraction rushing from the right side and on his last pass rush showed an impressive dip to get under the left tackle.

Against the run he makes a nice play shedding the block of the left tackle and coming back inside to make the tackle.  He showed solid pursuit from the backside but slowed at the first sign of someone in his way.  Would like to see his motor step up a bit and play all the way to the whistle on every play. He added a tackle on kickoff coverage and was solid blocking on punt coverage.

It’s a big week for him as he will likely step in for Bud Dupree.  I expect him to be good against the run and would like to see more creativity as a pass rusher. He should get plenty of one on one situations this week.

Highsmith (56) is on the left side of the screen. He gets a little wide setting the edge but sheds the block of the tackle and cuts inside to make the tackle.

Highsmith (56) is on the right side on this play and look at the dip under the tackle. I don’t think I’ve seen him do this move previously.

Of his three carries I think he made the right gap decision on only his final run.  His first run was outside to the right and I think he should have continued following the guard outside but he cut back inside.  The second run he had a clear lane in front of him and cut off to the left. His final run showed good pace and patience and chose the correct option cutting outside to the left.

His lone reception was on a quick out displaying good balance through the first tackle and getting good yards after the catch. I think he (and all the RB’s) should be used more in the passing game.

Here is the good rep showing good tempo and patience before accelerating to the outside.

This one is frustrating.  The hole will be literally right in front of him and he breaks it to the outside.  In practice the staff should tell him not deviate from the blocking scheme. Go to where the hole is supposed to be to work on his patience, timing and acceleration into the correct gap.

It was nice to see Dotson back on the field getting a few snaps. His first came as the right tight end in goal line and unfortunately the defensive end beat him to the inside to make the tackle. His second snap was at left guard when Chukwuma Okorafor had to leave the game for a snap and he had a solid pass pro rep on a quick throw to the outside. The third snap was again at the right tight end and it was a good run block to the inside that with teammates formed a wall for the RB to run behind. His last snap was as the left tight end in the victory formation at the end of the game.

Here is Dotson (69) as the right TE and he along with teammates will form a wall to the inside.

All four of his snaps came consecutively in the fourth quarter. His effort was good showing good pursuit and he showed good quickness to the inside on one snap to get in the backfield through the A gap and disrupt the running lane.  His pass rushes didn’t get a lot of movement but I’m looking forward to seeing how he can improve his hands when engaging the offensive lineman.

Pierre registered one tackle assist on the first kick off by tripping up the return man.  His punt blocking shows a lot of confidence and his effort is always on point. He did nearly take out Ray-Ray McCloud on one punt while blocking.

As the gunner on punt cover he was winning his reps routinely and was in in good position on a couple of punts but the returner ran the opposite way away from him.