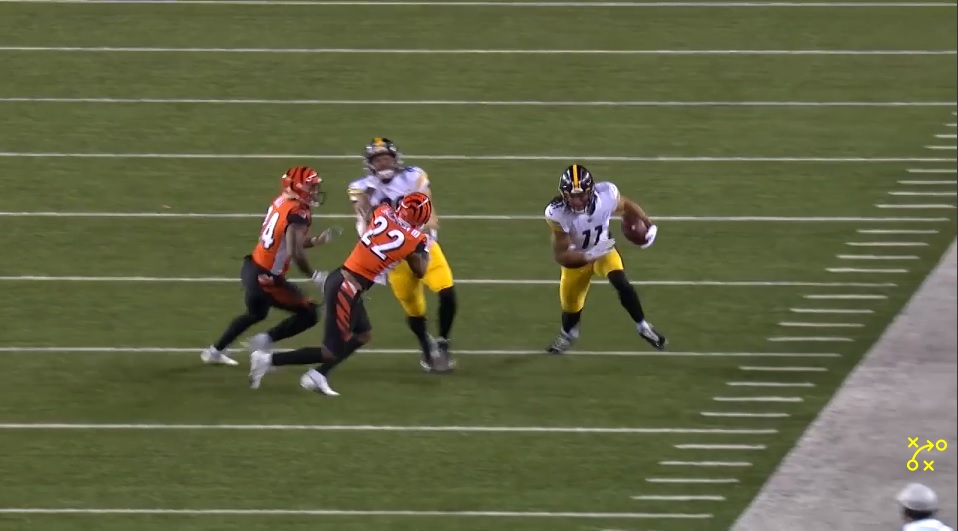 Claypool had the third highest offensive snap count for the receivers.  He was used on a varied of routes with the most common being Post/Skinny Post, Curl  and Go routes.  He was second on the team in targets but was not targeted on two big plays. On the two throws that forced receivers into big hits Claypool was open on both of them but was not seen by the quarterback.

His production started on a WR screen were he got a great block from Vance McDonald and showed very good acceleration up the sideline and was just tripped up preventing a score.  His other two receptions both came on curl routes on back to back passes in the middle of the third quarter. He showed good effort on a scramble drill to get open in the right corner of the end zone but the throw was too wide. His final target was a deep crossing route that was slightly underthrown that should have drawn a pass interference call.

They tried him on a jet sweep that had no shot with no one blocking the defensive end.  His blocking effort was much better this week on running plays and for other receivers downfield. His special team snaps on kickoffs were relatively quiet with most being touchbacks. The one return the Steelers had he led through a hole for Ray-Ray McCloud but did not block anyone.

This is the pass that JuJu Smith-Schuster got pummeled and fumbled. You’ll see Claypool (11) as the inside man in the bunch hesitate clearing the defender but ends up wide open on the second level.

Another solid performance by Highsmith verses the run and pass.  He used his hands very well against the run to keep blockers off his frame.  He did a nice job setting the edge and shedding blockers and showed good effort pursuing the ball from the backside and downfield.  His first two tackles were on runs his way where he shed blockers to make the tackle. Tackles 3 and 4 were from the backside. The first he chased all the way to the far sideline through traffic and the other on an inside run. The final tackle came lined up in the middle wrapping up a runner in a standing scrum.

He did get beat on read option plays a couple times chasing the running back instead of reading the mesh point including the touchdown run by Ryan Finley. He had made a tackle on the running back on the same play just four plays earlier so the Bengals went back to it and the QB kept the ball.

Rushing the passer he showed good flexibility early using primarily and dip and rip around the edge and got a hit on the quarterback that on another day may draw a flag for a low hit. He ran 3 or 4 stunts with Cam Heyward that were ineffective.  He mixed up his rushes more later in the game with a club/rip to the inside, and inside spin and a double chop but none of those let to pressures.  He needs to work on his hands rushing the passer.  There isn’t a lot of pop to his punch and he misses too often with chops and swipes.

His special team plays didn’t produce tackles but he was solid as a blocker on the punt team.

Here is Highsmith’s (56) QB hit.  His burst off the edge is good and he will dip around the left tackle and rip with his inside arm and get a hit to the lower legs of the QB.

After being inactive last week McFarland got limited usage this week but made the best of his opportunities.  His first play looked like a run play that Ben Roethlisberger decided to throw the ball instead.  The blocking looked to be for a run and if he had given it to McFarland he had plenty for room around the edge. A possible missed opportunity.  Plays two and three were on an incomplete throw to Diontae Johnson and a completion to McCloud.

His lone carry looked good on an outside run to the right were he showed the patience we have been waiting for and good acceleration up field when he saw daylight.  His reception came on a screen that had one Steeler to block in front of him versus three defenders.  He read the block correctly, cut inside and got a good gain.  Two well executed plays by McFarland and hopefully this points to better decision making by him going forward.

Here is the first snap were McFarland (26) had room on the outside but Roethlisber chose to throw it instead.

Davis received two plays in the second quarter. The first was as the 1 tech shading to the right of the center and he faced a double team block in which he initially got pushed back but was able to fight through toward the ball. The second snap he was directly over the center and used his hands well to control the blocker on a play that went outside.

Here is Davis (73) facing the double team.  He does get pushed back but shows good strength throwing the center aside and finding the ball.

Pierre had a solid game but didn’t record any tackles.  On punt coverage he was strong again putting himself in good position to force three fair catches.  He was doubled on two punts and kept those blockers occupied long enough to cut off a lane so others could make a play. On punt return he continues to make it difficult for gunners and was effective using basketball blocks to box out the gunner.