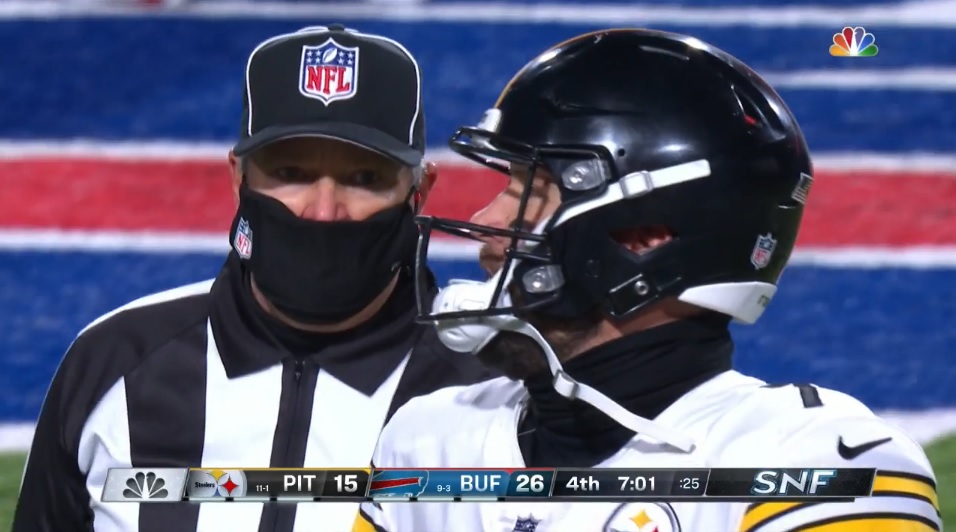 Steelers’ Nation may be panicking but Ben Roethlisberger is trying to keep perspective after the team’s second straight loss. They’re 11-2, still all-but assured of making the playoffs, giving them several weeks to make corrections before the postseason begins. Roethlisberger made that point clear in his post-game press conference with the media.

Still, it’s hard not to be upset at the offensive output right now. After scoring 26+ points in their first ten games, a franchise record, they’ve been held under 20 in each of their last three. The offense feels more like one led by Mason Rudolph or Devlin Hodges than one commanded by a first-ballot Hall of Famer.

Roethlisberger didn’t mince words about his team’s performance, including his own output.

Pittsburgh has especially struggled on possession downs. They’re converting just 33.3% of the time on third down over their last three games and were brutal in Sunday night’s loss to Buffalo, going 1-10. They’re turning the ball over, not creating chunk plays in the pass game, and the run game continues to be so invisible it should be put on a milk carton.

Roethlisberger is carrying optimism most fans aren’t, believing the Steelers will turn things around.

“I think that we will be [better]. I think this is a team that’s got a lot of resilience but that is resilient and understands what it takes to win football games. And understands what time of year it is and that the way we’re playing right now is unacceptable.”

Pittsburgh will have the chance to bounce back against one of football’s worst teams Monday night. They’ll travel to Cincinnati to take on the 2-9-1 Bengals. Cincinnati was blown out at home to the Dallas Cowboys Sunday, losing 30-7. Pittsburgh handled them in their first matchup back in Week 10, defeating them 36-10. Roethlisberger threw four touchdowns that day.