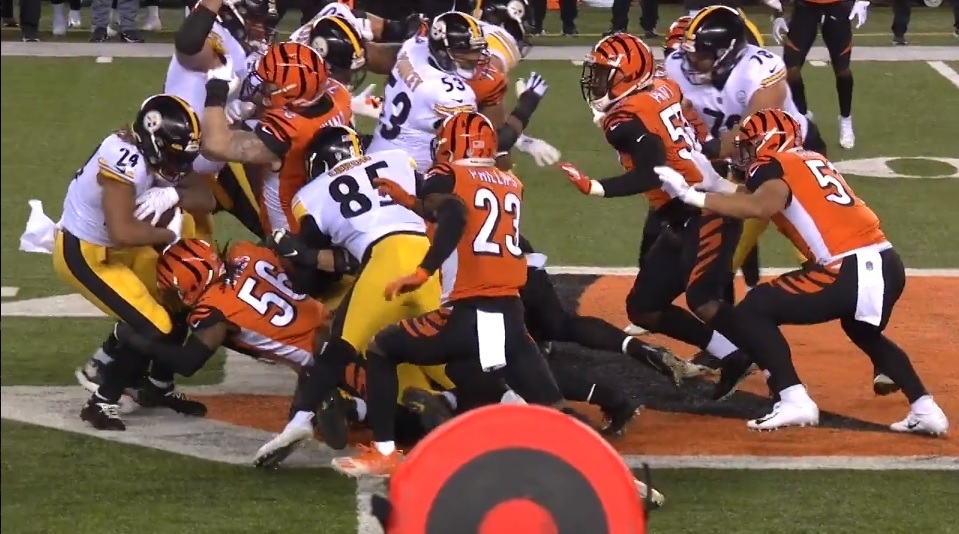 I’m going to write a lot of words here, and I’m not sure I’m even going to feel them at this point.

All I feel right now is pain, and a dash of disappointment following Monday night’s 27-17 loss to the….Cincinnati Bengals. In Primetime. On the road. That’s three losses  in a row and the third one might be the worst of all of them, and arguably one of the worst losses in Mike Tomlin’s era.

On the road against a woeful Bengals team down to its third-string quarterback, Pittsburgh’s offense came out incredibly flat thanks to Ben Roethlisberger, eventually trailing 17-0 at the half before trying to mount some sort of comeback.

What once looked so promising at 11-0 now feels like a take-us-out-back-and-put-us-down team. Dark, but true.

The first half performance by Roethlisberger may have been the absolute worst I’ve ever seen him look in his illustrious Steelers’ career. Roethlisberger looked fooled by coverages, really floated some balls to the sideline that raised questions about his arm, and overall put the Steelers in a 17-0 hole with a couple of hospital balls to JuJu Smith-Schuster and Eric Ebron, an easy pick to Mackenzie Alexander, and a botched snap that led to a short field.

In the second half he bounced back some, throwing a picture-perfect touchdown to Diontae Johnson, but when the game was on the line on the final drive, he regressed to his first-half ways, chucking and praying, misfiring to the sideline and throwing high over the middle that gave James Washington no chance to make a play.

I’m not sure how this offense figures it out, but 7 has to look in the mirror after this one.

I was really, really pleased with Benny Snell Jr. Monday night, filling in for James Conner. The offensive line finally figured some things out in the run game for stretches of the game, opening some holes for Snell, who ran hard and dished out punishment, finishing with 84 yards and a score on 18 touches.

I liked what Snell did as a checkdown back out of the backfield, adding three catches for 23 yards, picking up what the Bengals gave him before making sure he dished out punishment at the end of plays.

I liked some of the burst I saw from Anthony McFarland on his two touches. I’d really like to see him playing over Jaylen Samuels, who was again very poor in pass protection and made a boneheaded play running out of bounds late in the first half on third down, allowing the Bengals to keep a timeout.

Diontae Johnson really, really impressed me Monday night. He bounced back in a big way, answering the bell often on Monday against the Bengals. Johnson hauled in eight catches for 59 yards and a score and made some really difficult catches in the loss, showing he can bounce back from struggles.

Chase Claypool made a nice play on the screen down the left sideline, but overall he didn’t have a huge impact. His end-around went for a huge loss and he just can’t seem to finish plays down the field right now.

Smith-Schuster did a nice job bouncing back from him fumble – let’s be honest: that ball shouldn’t have been thrown to him. It pretty much sums up the Steelers’ offense the last few weeks though: three catches for 15 yards with a long of 21.

When Ebron left with an injury after a hospital ball from Roethlisberger, I was really concerned about TE production. Yes, Vance McDonald did absolutely nothing in the passing game, but he did a really nice job in the run game helping open holes for Snell throughout the night.

He also had a key block on Claypool’s long catch and run down the left sideline.

Pass protection though? That was another story.

Side note: if I never have to see JC Hassenauer at guard again, I’ll be happy.

While the Bengals had a ton of success running the football, that’s not something I’m putting on the Steelers’ defensive line, which really played well against the point of attack.

They really did a nice job holding up blockers and shedding when necessary to make plays.

I was really displeased with the inside linebackers Monday night. I know they’re shorthanded, but these guys were slow to flow against the run and were nightmares in coverage. Gio Bernard cooked Avery Williamson on his Texas route for the game’s first touchdown.

Outside TJ Watt was insanely good, dominating from the get-go. Watt finished with a sack and three tackles for loss, forcing the Bengals to double and sometimes triple team him. Opposite Watt, Alex Highsmith had a strong game, but may have been fooled on the Ryan Finley rushing touchdown on the read option. I need to see the All-22 to be sure, but it didn’t look great live.

The inside group is super banged up and just quite isn’t up to par at this point, and the outside backers can’t quite live up to the pressure of carrying the group right now.

Side note: just wanted to say RIP to the legendary Kevin Greene. That one really hits home. He was my Dad’s favorite player when I was younger, so I always liked watching Greene’s highlights. Gone far too soon.

Hard to really give this group an overall grade right now, considering the Bengals threw the ball 13 times and won!

I thought Minkah Fitzpatrick was outstanding Monday. His play to drag down Finley behind the line on third down reminded me so much of his play on Kyler Murray last year in Arizona on the read-option. He was all over the place on Monday night and dished out some punishment in the process.

Joe Haden was beat by AJ Green once and had an ugly missed tackle on Bernard’s rushing touchdown. Steven Nelson looked good returning to the lineup, breaking up two passes in the loss.

Cam Sutton and Mike Hilton had decent nights with Hilton living around the line of scrimmage, while Sutton broke up a pass and looked strong in coverage.

Here’s hoping Derek Watt is okay. That was scary and really gave me Ryan Shazier flashbacks.

Aside from that scare I liked what I saw from the special teams on Monday.

Jordan Berry better ice his leg up because he might be called on a lot more down the stretch. Berry punted the heck out of the ball Monday, averaging over 52 yards per punt. He pinned the Bengals deep on one of his six punts and had a long of 61 yards.

Chris Boswell drilled his lone field goal of the night and nailed both extra points.

Ray-Ray McCloud got going on kick returns on Monday, returning one 30 yards to give the Steelers good field position.