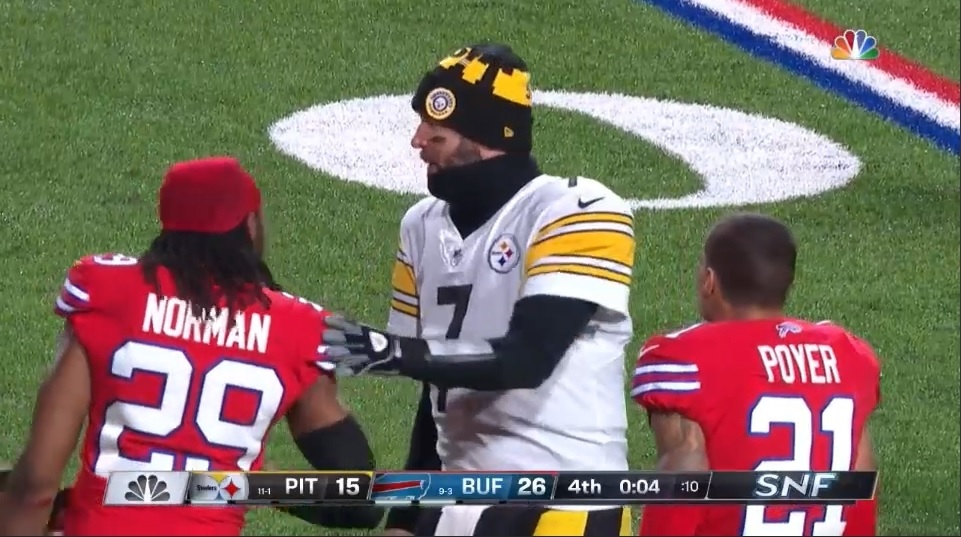 Just over one week ago, the Steelers were undefeated. Today the Steelers are 11-2 after suffering two straight losses.

We can use many excuses to explain the team’s poor performances. Four starting defenders and a key backup turned starter suffered injuries or illness. Devin Bush, Bud Dupree, and Robert Spillane on injured reserve. Joe Haden concussed and Vince Williams on the Covid-Reserve list. Running game stymied by offensive line injuries. Maurkice Pouncey returning after two game absence. Steelers originally planned to play Matt Feiler at tackle with Zach Banner (also injured) and Chuks Okorafor but injury to Stefen Wisniewski pulled him into guard. Now he’s hurt along with his substitute Kevin Dotson. Practice squad linemen J.C. Hassenauer now the go to linemen as the Steelers lose linemen. Then there were the schedule changes due to the Ravens malfeasance which the NFL has yet to penalize. Three games in 11 days with no real bye week. We could continue but it is moot.

On gameday, the starting lineup comes from the people who are available. It is the coach’s responsibility to tailor a game plan that highlights the strengths of their roster while shielding their weaknesses. As for motivation, I’d say that is the player’s responsibility at the professional level. Regardless of how tired or sore their bodies may be, they are paid to play and win professional football games.

After falling to Washington, I viewed this game as a steppingstone for either Pittsburgh or Buffalo. Who is the real contender for a deep playoff run and who is the pretender?

Prior to kickoff, JuJu Smith-Schuster chose to dance on the Buffalo Bills logo. Some Bills players say it inspired them to play harder. Some Steelers fans and pundits says it’s all playful fun and professionals don’t need extra motivation. Frankly, emotion is a big part of many sports. Players pump themselves up with rituals, post play routines, and “bulletin material.” I guess Steelers fans and players should just shrug and say no big deal when an opposing player messes with a Terrible Towel. They are all professionals unaffected by antics. JuJu is a talented player and played better than most in this game. But as an average Steelers fan, I believe JuJu should stop the antics. Dance away just not on the opponents logos during pregame warmups.

STEELERS COMPETITIVE FOR A HALF

The Steelers opening drive preceded by Ray-Ray McCloud’s ill-conceived return from deep in the end zone. He managed to reach the 10-yard line. Diontae Johnson drops a pass on the first play of the game. He drops a second on the next drive and ends up benched for most of the half. Steelers forced to punt on their first five drives. Frustratingly, the last two punts are in Buffalo territory.

The defense has a strong start. Josh Allen under pressure. A three and out. Then a tipped ball. On the next play Mike Hilton intercepts the pass after Cam Heyward hit Allen’s arm preventing follow-through. Unfortunately, the offense cannot exploit the turnover. The defense creates another takeaway early in the second quarter. Mike Hilton hits D. Knox and Cam Sutton recovers the fumble. On the previous series, Sutton hit Allen’s arm for an apparent fumble, but officials ruled it an incomplete pass. Mike Tomlin chose not to challenge.

The Sutton fumble recovery gave the Steelers the ball at the Buffalo 30. James Conner ran five yards then fumbled. JuJu alertly pounced on the ball for three additional yards. Conner gains three more to enter the red zone for the first time. Ben connects with James Washington for a 19-yard touchdown pass. Feeling good at this point. Defense playing hot and the offense scored off a turnover.

Big Ben threads it to @JamesWashington for the TD! #HereWeGo

Down 7-0, the Bills punt after a three and out with Tyson Alualu knocking the ball out of Allen’s hands for a sack. But so, do the Steelers. Then Buffalo sustains a nine play 43-yard drive. Their longest of the game to this point. The key play was Stephon Diggs bouncing off Steve Nelson and Minkah Fitzpatrick with neither wrapping him up, so he gains 23 yards. The Bills got another 15 yards from the officials. The Bills lined up in an illegal formation, but that penalty negated by Harry Mondeaux hitting Josh Allen just after he released the ball. The defense held the Bills to a field goal but they’re on the board 7-3.

Wrap it up, yo. #Steelers pic.twitter.com/gtrrc4Io9M

The Steelers got the ball back with 1:42 remaining in the half. The Steelers were marching with Eric Ebron catching a 13-yard pass. A neutral zone infraction gave the Steelers second and five at the 47-yard line. Ben’s soft pass to JuJu was slightly behind and Buffalo’s Taron Johnson took the interception to the house. The Bills missed the extra point making it 9-7.

Buffalo takes the lead with a big pick-six 🙌

Inexplicably, the Steelers had the ball with two-time outs and 52 seconds to play but decided to let the clock run out knowing the bills open the second half with the ball. Mike Tomlin blinked.

The Steelers needed a strong defensive stand to give the offense a chance to regain the lead. Instead, they give up two straight touchdown drives. Steve Nelson fell on one play allowing a 19-yard Stephon Diggs touchdown. It’s 16-7. The offense lost Matt Feiler in first quarter, now lose Kevin Dotson early in the third quarter. Ben sacked for first time in a long time. Another poor punt and loose coverage lead to Bills second score to make it 23-7. Needed big defense to start half but end up with a deeper hole.

The Steelers pull within eight with a ten play 78-yard drive at start of fourth quarter. Diontae Johnson back in the game contributing with three catches for 28 yards. Jaylen Samuels gains six for a first down on the ground. Catches eight more in the air. JuJu and Washington catch their passes too along with Ebron. Ben connects with JuJu for the touchdown. Then he hits Ebron for two to make it an eight-point game.

The mood quickly sours. The Bills march down the field assisted by 35 penalty yards on Mike Hilton grabbing a receiver before the ball arrived. I think the ball may have been overthrown even if Hilton had not interfered but regardless. The Bills kick a field goal to make it 26-15 and ate more clock.

Ben throws deep to Washington, but ball intercepted. The Bills then keep the ball for the final 7:11 of play. Josh Allen unpressured connecting with uncovered receivers or scrambling effectively finishing the game in victory formation.

This interception is ridiculous.

The Steelers in a death spiral. The team did not achieve a single performance key laid out by Dave Bryan.

The Steelers kept it close through the first half. Ben’s pick-six deflated the team, and they did not recover despite being only two points down at the time. Special teams contributed to the loss with anemic punting by Jordan Berry poor coverage on the Bills return team that averaged 31 yards per kickoff return. Coupled with McCloud averaging just 20 yards per kickoff return and stopped for no gain on only punt return gave Bills overall better field position.

The offense punted eight of 13 possessions away. Turned the ball over twice including a pick-six. Then on the final first half possession opted to let the clock run out with a minute to play and two unused timeouts.

The defense played a great first half. Two takeaways and only gave up three points. However, the second half giving up two touchdown drives to start is unacceptable. The late drive giving up a field goal nailed the door shut. Finally allowing the Bills to hold the ball for the final 7:11 to play.

The Ravens playing with a practice squad laden team exposed the cracks in this team. Washington learned from that game and beat the Steelers. The Bills continue the trend. The Cincinnati Bengals are up next. They will be playing a third string quarterback. But remember the last Ravens game. The Steelers have a week to mend their bodies and their game plans. The Bengals are not playing to lose. Here we go. Hope we see more of this:

I always like to offer a music selection. The Steelers showed that Buffalo was not a steppingstone to a successful playoff run. Paul Revere and the Raiders first recorded (I’m Not Your) Steppin’ Stone in 1966. I’m using this version from the Monkees since the choreography outperforms the Steelers game plans.