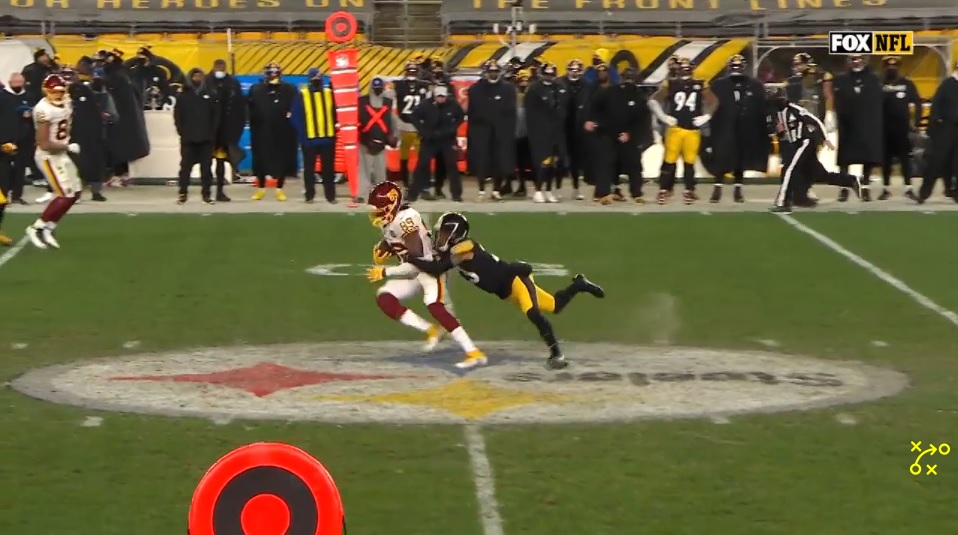 It wasn’t bad overall, but it was the highest missed tackles number in five weeks, dating back to the first game against Baltimore earlier this season.

One thing you’ll notice here in this breakdown is that a lot of defensive backs are featured. It wasn’t great from the secondary players in the tackling department Monday.

Mike Hilton had a whale of a game Monday against the Washington Football Team, but it could have been even better if he wrapped up and cut down on his missed tackles on the night. With his three misses in the game, he now takes over the team lead, despite missing four games.

Justin Layne received more snaps on Monday night with Steven Nelson out injured. He didn’t have a good night, missing two tackles and looking overly passive throughout the night.

Then there’s Joe Haden. Haden’s missed tackle late in the second quarter eventually led to three points for WFT, which came back to haunt the Steelers late in the game.

Let’s look at some misses.

This is a miss I’ve seen a thousand times from the Steelers in my six years with Steelers Depot.

Too often, defenders use the sideline as a fail-safe when it comes to tackling in the area. When they see the sideline next to the defender, they throw all technique to the wind, seemingly, and you get messy misses like this.

Hilton has to be more aware that there’s so much green grass behind him and in front of him that Washington Football Team tight end Logan Thomas can bait him in here. That’s just what Thomas does, easily sidestepping the out of control Hilton, before then slipping a Justin Layne tackle and nearly moving the chains.

This is a play Haden must make, especially late in the half, and darn sure in space like he is. It’s puzzling to see Haden go high on a big, physical receiver like Cam Sims, but that’s just what he does, eventually losing badly on the tackle attempt.

Once Sims shakes free of Haden, Layne is right there to clean it up, but look at the passive style of play Layne showed. Flat-footed and unwilling to drive downhill for the stick. That’s just an ugly rep.

After that, Washington wide receiver Terry McLaurin throws a tremendous block on Minkah Fitzpatrick, allowing Sims to slip down the sideline for 29 yards, setting up WFT in scoring position.

Offensively, Pittsburgh did a nice job forcing misses for the fourth straight week. Dating back to the Cincinnati Bengals game in Week 10, Pittsburgh has forced misses of 12, 15, 16, and 14.

It’s nice to see Jaylen Samuels crack this list in Week 13. He looked like the best running back on the roster on Monday, showing burst and decisiveness. I sure wish he was the target on fourth and one late in the game.

When he was targeted, Samuels looked like he did in his rookie year. Maybe he’s found some of his burst and elusiveness that’s been missing the last two years.

That’s a great job to secure the throw and then hit WFT cornerback Jimmy Moreland with a move inside to slip the initial tackle. Once he slips the first one, he’s able to slip through Jon Bostic’s tackle attempt, taking a one-yard swing pass and turning it into an 8-yard gain.

Earlier in the game, Diontae Johnson showed something I hadn’t really seen from him through 27 career games: power.

Poor Ronald Darby. That’s not something you want to see the next morning in the team film session, especially when the guy running over you weighs 10 pounds less than you and is much smaller overall.

What a job by Diontae putting his foot in the ground and lowering the boom to pick up additional yards. I hope he gets praised for that in the team session this week.

Then, there’s James Washington. What a player. I hope he gets more snaps.

This quick pitch and catch turned into a 50-yard touchdown that put the Steelers up 14-0 in a game they had no real business losing.

Washington isn’t the biggest, fastest, or standout SPARK guy, but he just makes plays and is strong as an ox.

That’s a great job getting out of the tackle attempt from Kendall Fuller and then getting up to speed quickly to beat Deshazor Everett up the field. Shout out to Samuels too for blocking well downfield for his teammate.