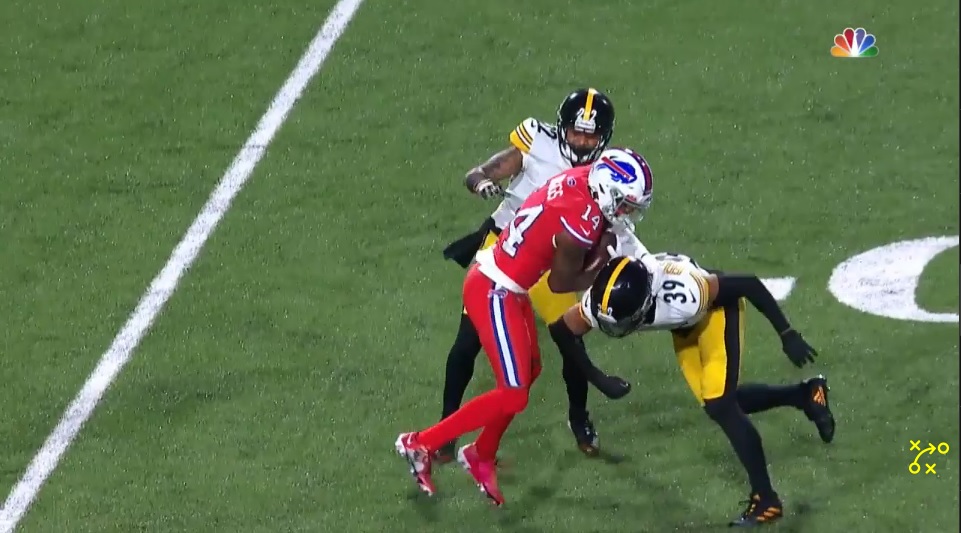 Turnovers and missed tackles make for a losing recipe, and the Pittsburgh Steelers tasted that bitter concoction Sunday night on the road in Buffalo against the red-hot Bills at Orchard Park.

Pittsburgh turned the football over twice on two Ben Roethlisberger interceptions – one of which was pick-six near the end of the first half, and turned in a season-worst performance in the tackling department, aided by four misses on special teams.

Lots of guys recorded their first misses of the season, and it came at an inopportune time in a game the Steelers really needed defense and special teams to carry the day.

It was really disappointing to see key special teams guys like Jordan Dangerfield, Henry Mondeaux, Ola Adeniyi and Jayrone Elliott miss tackles in this one, helping Andre Roberts and the Bills start with good field position more often than not.

Defensively, Alex Highsmith recorded his first miss of the year on a broken play, as did Tyson Alualu. Overall though, I thought that pair played very well on Sunday.

Let’s check out some of the key misses.

Every now and then Minkah Fitzpatrick has absolute brain cramps as a tackler, and that’s just what happened here against Stefon Diggs.

Fitzpatrick played this one well initially, timing the hit perfectly, but he didn’t bring his arms at all to the play, instead relying on the big shot hopefully knocking Diggs down or jarring the ball loose.

Neither happened, leading to Diggs scampering through the Steelers’ secondary for a 23-yard gain, igniting Buffalo’s offense late in the first half.

In the third quarter with Buffalo’s offense rolling, the Highsmith and Hilton played a key role in Devin Singletary turning what should have been a 5-yard loss into a 1-yard gain.

Hilton does a great job just getting there on this play as the backside defender, but once again he’s out of control coming into the contact point, leading to Singletary using his momentum against him to sidestep for the miss.

Highsmith tries to clean it up, but he’s caught leaning, allowing Singletary to slip inside him for the second miss of the play. Fortunately, Cam Heyward and Marcus Allen are there to clean up the sloppy play for the gain of one.

As I mentioned earlier, special teams was ugly. This was the most egregious one from them on the day, regardless of the block in the back penalty on Josh Norman wiping out the return.

Andre Roberts is an All-Pro caliber return man, so you have to work in tandem when in kick coverage.

Neither Elliott nor Adeniyi got the memo, leading to Roberts making them both look silly by splitting the seam. Elliott takes the brunt of it by slipping and falling, drawing some oohs and aahs from the Bills’ sideline, but really, Adeniyi had the worst rep here. He has to squeeze and put a hat on Roberts.

After that, he’s off to the races. Pittsburgh is fortunate Norman blocked someone in the back.

Offensively. Pittsburgh was fine in the missed tackles department, racking up 10 on night in which the offense was mostly abysmal. With the 10 forced misses, Pittsburgh lost the tackle battle with a mark of -2, marking the first time since the win over Dallas in which the Steelers lost the battle within the game.

What you’ll see below is just what the Steelers’ running backs are dealing with on a consistent basis in the run game. Fortunately for Pittsburgh, Conner was able to create on a few of the runs, but overall it’s a mess up front.

That’s tough to see a guy like Tremaine Edmunds running free into the hole right at the snap, but Conner does a nice job slipping through the tackle to at least get to the line of scrimmage.

From there, it’s all Conner, setting up AJ Klein on the spin move back inside to pick up 3 yards.

Again, there’s a defender in the hole almost as soon as Conner takes the handout. Fortunately for him, it’s Klein, whom he sets up with another spin move, busting free.

After that though Conner gets lax with ball security and fumbles the rock. Fortunately for Conner, JuJu Smith-Schuster is there to be Johnny on the spot.