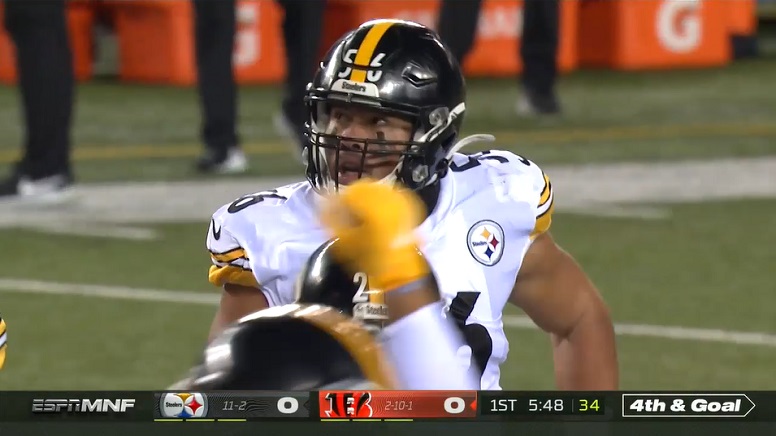 Monday night marked the third consecutive game that rookie outside linebacker Alex Highsmith has started since the team lost outside linebacker Bud Dupree to a season ending knee injury and while the third-round draft pick out of Charlotte was far from perfect in what ultimately was a disgusting road loss to the Cincinnati Bengals, he seemingly played well overall.

On Tuesday, Steelers head coach Mike Tomlin held his weekly press conference and during it he was asked to comment on Highsmith’s play as a starter since taking over for the injured Dupree back in Week 13.

“I’ve been pleased with his efforts and his contribution and maturation through this process,” Tomlin said of Highsmith, who played all but three defensive snaps against the Bengals Monday night. Man, there’s valuable experience to be gained through the snaps that he’s acquired, but also, he’s been a productive player for us. And it’s reasonable to expect that to continue.”

Monday night against the Bengals, Highsmith was credited with five total tackles and one quarterback hit. If anything, Highsmith’s play against the run Monday night, and especially when quarterback Ryan Finley took off with the football, was the most troubling aspect of the rookie’s Week 15 game performance. Most notably, Highsmith crashing down too aggressively on a read-option play in the fourth quarter allowed for Finley to get outside and scamper 23 yards for a touchdown.

Ryan Finley keeps it for the 23-yard rushing TD!

Pro Football Focus has Highsmith graded out at 62.8 for his play Monday night and they unsurprisingly dinged him the most for his play against the run.

As Tomin indicated on Tuesday, Highsmith is now getting a lot of valuable playing time to close out the 2020 season. It’s clear that the team expects him to be the heir apparent of Dupree, who will likely sign elsewhere as an unrestricted free agent at some point during the offseason.

For the season, Highsmith has been credited with 26 total tackles, a sack, four tackles for loss, three quarterback hits, one pass defensed and one interception. Next up for the Steelers rookie outside linebacker is a Sunday home game against the Indianapolis Colts and their starting left tackle Anthony Castonzo, who has allowed all of two sacks so far this season and just 18 total pressures.