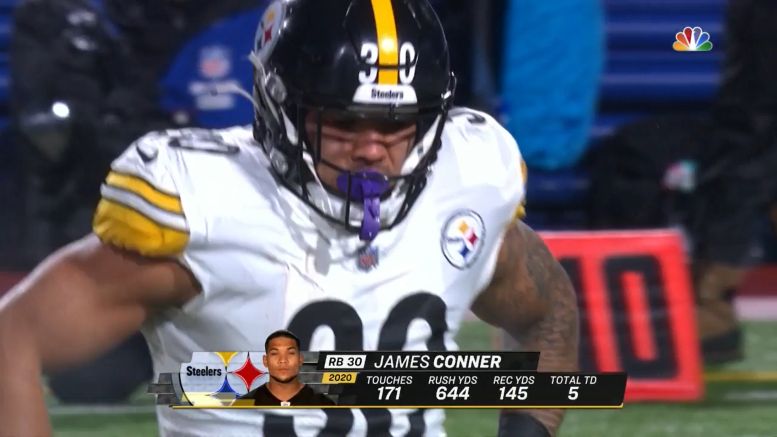 The Pittsburgh Steelers got their starting running back, James Conner, back from the Reserve/Covid-19 List for last night’s game after missing the past two games. They also got their Pro Bowl center, Maurkice Pouncey, back at the same time, who also missed the past two games for the same reason.

If the Steelers were hopeful that their return would provide a boost to the running game, then they were clearly mistaken, at least as it pertains to their performance in this area last night against the Buffalo Bills on the road, because by the end of the night, the numbers show that it was just more of the same.

And this time, it was Conner who was ineffective. He had 10 of the Steelers’ 17 carries, but he put up just 18 yards, with a long of five, averaging 1.8 yards per carry. Benny Snell gained 14 yards on three attempts, while Jaylen Samuels gained 15 yards on four attempts. Rookie Anthony McFarland, who had two successful carries last week, was a healthy scratch.

Regardless of the usage splits in the run game, Conner actually didn’t play a whole lot, or so it seemed. While we do not have snap counts available yet, it certainly seemed as though he spent a lot of time on the sidelines, with Samuels being featured in a lot of their passing offense (who would catch three passes on four targets for 18 yards).

Asked about Conner’s usage after the game, head coach Mike Tomlin chalked it up to just not being good as an offense. “We didn’t possess the ball enough”, he said, “and so there’s a scarcity of snaps. And when you have that, you’re gonna have questions about distribution of the ball and who gets it and establishing the run and all of those things”.

But is there a simpler explanation? Or at least a co-explanation? Conner was only activated from the Reserve/Covid-19 List on Wednesday. He spent more than 10 days on the list, which strongly indicates that he not only tested positive, but was also symptomatic. Perhaps he simply needs more time to get himself back into condition, both from being out of practice and from recovering from an illness.

Whatever the reason, the Steelers need to get much better performances from many, many players than they got last night, and have been getting for weeks. They have now dropped two games, and have not looked like the same team since beating up on a couple of bottom-feeders several weeks back.